On the value and futility of protest: Two scandals which rocked secular Israel—how did it happen? 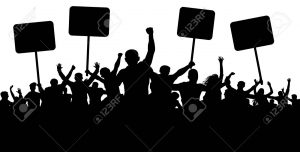 I want to discuss two recent scandals in Israel which at first, seem entirely unrelated.

One is the heart-rending day care scandal reported last month, where a number of female staff members of a child day care center were caught (on video) routinely and casually abusing the toddlers under their care. 200 incidents of abuse were recorded.

The second is the horrific report last week of a drunk 16 year old girl allegedly being consecutively raped by a large group of boys and men in an Eilat hotel room. Thankfully, no video is available and will hopefully never be publically available. (Initial reports estimated the number of rapists to be 30, but it seems this was an exaggeration and the number may not reach 20. However, the exact number is not relevant to the point being made below.)

The response of the public, the media, and the politicians to both these scandals was predictably vocal—and this is when protest (whether in person or on social media) becomes a positive force for good. It shows that secular Israeli society is shocked and disgusted by the behavior of these people. It sends a message to those who were not shocked and disgusted by this behavior that they ought to be. It sends a message that this society does not tolerate such behavior. If you were not shocked and disgusted, you need to examine yourself and wonder if you really belong to the same civil society as the rest of us who were.

But then we come to the demands of the protesters and the politicians who support them.

Of course, anyone with a shred of decency and humanity should be crying out for measures to be taken to ensure that these kinds of incidents never happen again. But in order to solve a problem, the first step is to identify it. The tragedy of these incidents is compounded by the profound lack of our ability to rectify the problem easily—by better security, stiffer penalties, or more social programs.

The problem was not a preventable lapse in some kind of governmental system or program or law enforcement. It was a clear lapse in the humanity of the perpetrators.

It is naïve to think that legal measures or safety measures of a technical nature are sufficient to solve this kind of problem. It is also naïve to think that some kind of sensitivity training program can be implemented by the government to somehow pre-emptively target and re-educate those whose humanity has most likely been compromised.

Because the sad reality is that while the vocally negative public reaction is an encouraging sign of the health of Israeli society, the fact that these incidents took place in a group setting and not by individuals in private illustrates that their lapse of humanity is a societal failure.

To be clear: No society should be held responsible for the errant behavior of any individual, or even many individuals. Every society has the right to distance itself from, or completely disown, deviant members. But when the errant behavior is perpetrated by a typical group in its ranks, it reveals a serious flaw in the society which produced them.

Social dynamics of group behavior –of approval and disapproval–are very powerful. The abusers and rapists in these two incidents apparently were convinced that the people around them –other typical members of their society—would not be inclined to take action to discourage their semi-public acts of abuse and rape. And some even joined them. You can’t routinely abuse toddlers on a daily basis in a day care center unless you are convinced that no-one in the staff would disapprove. A girl can’t be raped by a crowd of 15+ strangers over the course of hours unless the behavior is generally considered acceptable by that group of people.

When the norms of a society are not strong enough to make inhumane behavior unacceptable in a public setting, the failure lies at the feet of society at large.

So now we get to the difficult question.

Why weren’t these abusers and rapists sufficiently humanized by their parents, mentors, and society at large?

One factor could be the lack of structured and pointed moral instruction inherent in a secular society/educational system.

In a secular society, moral instruction is completely optional—not an absolute given as it is in religious societies. It is usually when incidents like these are brought to their attention do thoughtful secular parents and social commentators stop and reflect on the demons that lurk in people’s hearts and are motivated to educate. But waiting for such incidents to take advantage of “a teachable moment” is not a good model for moral education. It is random, sporadic and cannot guarantee that all the dark corners of human nature that need civilizing will be adequately addressed.

As a religious Jew, when reading about such scandals in the general world, I can’t help but make stark contrasts. I deeply appreciate that my community has greatly benefited from a multitude of dedicated and talented religious educators, and a wealth of texts and commentary that has proven very effective in inculcating most of the moral foundations needed for building a civilized society.

No, we aren’t perfect. Yes, we have moral weaknesses and serious lapses that regrettably have come to typify our community. (To clarify, I’m referring to widespread financial criminal activity which usually involves defrauding impersonal, faceless financial institutions, government programs, and various forms of tax evasion. It is inexcusable. But to put it in perspective, contrast this with the Israeli binary trading industry – hundreds of companies employing thousands of Israelis, typically secular. They have defrauded tens of thousands of unsuspecting, vulnerable people out of billions of dollars, enriching themselves through manipulative individual, person-to-person conversations. Part of the job description is getting to know the person they will ultimately scam.)

Again, our community is far from ideal. But we have the tools to be a work in progress.

As a Jew who is routinely confronted by classic Jewish texts, I am constantly made aware of the dangers of the dehumanizing tendencies of human beings—including myself. The fact that I was exposed to the incident of Pilegesh b’Giva’ah in my youth and how it was nearly universally—and violently– condemned by the Jewish nation at the time, has gone a long way in educating me about the capacity for unspeakable sexual depravity—even by Jews. Classic Jewish texts have a way of speaking about the unspeakable in a very productive, thought-provoking manner.

So as a religious Jew, it pains me to see secular parents and educators completely on their own—lacking any Jewish guidance in the realm of moral education. It is an asset that is universally accessed in the religious world and it is a shame that it is not shared.

I want to do something about it. But I don’t really know what the best solution is.

Religion is obviously out of the question for secular Israelis. Cramming down Bible instruction in secular government schools would clearly violate the cardinal sin of religious coercion. But perhaps it would help to merely put out the suggestion that parents and children voluntarily review the weekly Torah portion—and the haftaroth—with some basic commentary on the weekends. Is it not part of their national heritage as well as ours? Surely a national ad campaign by a kiruv organization can be designed to trigger an interest in Torah self-study—with a focus on morality—to the secular public in a non-threatening manner.

I believe this is one way secular families can make consistent, systematic progress in sensitizing their children—and themselves—to the fundamental building blocks of Jewish morality and basic humanity. Foundations that are desperately needed in an ultra-permissive, hyper non-judgmental cultural climate.

Anybody else have any ideas?

Dovid Kornreich grew up in the U.S. and made aliya when he married in 1996. A long-time member of Yeshivas Toras Moshe’s kollel and staff, Rabbi Kornreich has been studying and teaching Talmud and Jewish thought in Jerusalem for many years. He currently lives in Givat Ze’ev, Israel.