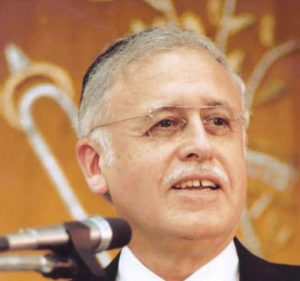 A Note About an Unfortunate Article
August 28, 2020

A number of people have called my attention to an anti-Agudath Israel screed that was recently published as an op-ed column in a Jewish periodical. The article defames Rabbi Moshe Sherer z’l, distorts the words of my colleague Rabbi Avi Shafran, and slanders the Agudah. I feel I must respond.

The article insinuates that the Agudah, going back to 1980 when Rabbi Sherer served as president of the organization and continuing still through today, supports Democrats over Republicans to the detriment of our community’s interests, and does so for financial gain. Thus, writes the author, “the late Rabbi Moshe Sherer of Agudath Israel had promised President Jimmy Carter the Orthodox vote . We can only speculate what he got in return for choosing the spendthrift candidate over the moral candidate.”

To anyone who knew Rabbi Sherer, the notion that this legendary Agudah leader who enjoyed the absolute trust of the greatest Gedolei Yisroel would favor a “spendthrift” political candidate in order to get something “in return,” is beyond preposterous and deeply offensive. What is the author’s source for Rabbi Sherer’s alleged promise to President Carter?

And what is his source for the equally startling assertion that Vice President Walter Mondale called Rabbi Sherer to complain about people wearing Reagan buttons on Ocean Parkway, to which Rabbi Sherer supposedly replied that they were disciples of a “fringe rabbi” who had no real following in the community? Whether any rabbonim encouraged people to wear Reagan buttons I do not know, but it’s a bit hard to believe that Vice President Mondale would place a special call to complain about the buttons of Ocean Parkway. And it’s even harder to believe that Rabbi Sherer would denigrate a choshuve rav in conversations with any other people, let alone the Vice President of the United States.

The author intensifies that attack by pointing to one of Rabbi Avi Shafran’s recent articles in which he opines that most Democrats, including Vice President Biden, are reasonable people and generally supportive of Israel. This opinion, in the author’s eyes, constitutes “criminal naivite and negligence at best, cynical manipulation and distortion at worst.”

Further, it proves that “Rabbi Avi Shafran and Agudath Israel were still engaging in their misguided behavior from 1980.” (Just to make sure his readers understand what’s really on his mind, the author congratulates himself for his temperate language in describing the Agudah’s behavior as simply “misguided”; “the alternative,” he ominously proclaims, “is too awful to contemplate” – thereby inviting his readers to engage in precisely such awful contemplation.)

While it is true that Rabbi Shafran serves as Agudath Israel’s public affairs director, he also frequently speaks in his own voice as well, not as a spokesman for the Agudah but as a private individual. His column about the Democratic Party was an expression of his personal views, and cannot be attributed more generally to the Agudah.

But beyond that, it is dismaying that the anti-Agudah op-ed columnist cites Rabbi Shafran’s article so selectively, treating it as a de facto endorsement of Mr. Biden and the Democratic Party. In fact, Rabbi Shafran took pains to disavow any such endorsement. Here’s what he wrote:

“None of the above is intended as a call to support Mr. Biden. There is ample and understandable enthusiasm in our community for President Trump, who has taken a number of steps to show support for Israel. And there are other issues where our stances resonate with the Republican ones. Personally, I am a registered Republican, and have, over decades, most often voted for Republican candidates.

“I’m suggesting only one thing: that we refrain from demonizing either of our country’s major political parties.”

Finally, a word to the periodical that published this anti-Agudah screed: What conceivable to’eles is there in attacking Rabbi Sherer? What heter is there to publicly denigrate an organization that works tirelessly and effectively under the leadership of gedolei Yisroel to promote the interests of the klal?

The writer’s words, were they true, would be lashon hora of the worst sort. As it is, they are worse, a hotzo’as shem ra, an inexcusable slander.