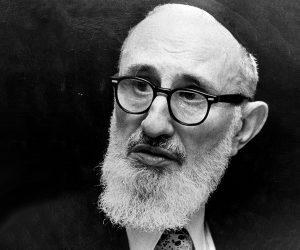 Rabbi Gordimer, with all due respect, you’re mistaken. You didn’t have any explaining to do. You were gracious in your apology, but you cannot truly offer penance when you have done no wrong. What you wrote wasn’t revolutionary, wasn’t offensive, and, honestly, I think most of us understood your intent quite well. You have now assuaged one who misunderstood you, but your original critique still rings true.

Full disclaimer: I am neither a student of the Rav, nor more than casually familiar with his oeuvre. My father-in-law was considered one of his brilliant talmidim in his day, but we did not have long discussions about his Rebbe’s opinion on various subjects. So I approach this discussion as an outsider. That means I can look at general principles that arose in your discussion far more than I could hope to address anything unique to Rav Soloveitchik. So it is in that vein, with full disclosure of my limitations, that I contribute my thoughts.

… when dealing with master disseminators of Torah – rebbeim – one cannot sever their temporal existence and their writings from their eternal and living legacies. One must look to the closest disciples of a Torah disseminator to determine his focal impact and long-term emphases, and to understand the traditions, insights and attitudes he transmitted and exemplified.

The only thing you said with which one could possibly quibble is the phrase “when dealing with master disseminators of Torah.” I believe that what you wrote is true of any writer.

One who reads a teacher’s books or essays is obviously going to remain a distant second to that scholar’s “closest disciples,” those who studied under his tutelage for several years, when it comes to correctly portraying the thoughts and beliefs of their teacher. The only exception to that rule would be a student who deliberately misconstrued his teacher’s positions — and the remedy to that is found by looking at what other close associates and students have to say. From everything I have heard from others, your essay reflected the consensus, rather than the positions of an outlier.

What you wrote was no insult. No one was declared “unfit.” What you found at issue is the very reason why we are told not merely to study the works of Talmidei Chachamim, but to be “meshamesh,” which is perhaps poorly translated as “serving” them. A Shamash is not an Eved. In modern terms, Executive Assistant would be a more accurate term. By being close at hand, by listening even to the ordinary dialogue of a person, one learns things which cannot be gleaned from books. And Chazal exhorted us to have this experience with Sages, in order to learn to emulate them — to learn to think as they do.

And as I said, the disparity between readers and close associates is not limited to “master disseminators of Torah.” Rabbi Gordimer, you are a prolific writer, so I’m certain you can identify instances where your own written work has been misunderstood and misconstrued. I am sure that you can identify times when various readers ascribed to you motivations, emotions, and implications which you simply did not possess at the time. I’ve certainly had this experience often enough (yes, my writing can be inadequately clear. But still).

These are often exercises in projection: someone angered by something I wrote (although considering how I studiously avoid controversial topics, I cannot understand how that happens) might describe me as “angry.” On at least a few of those occasions, I remember chuckling as I was writing the “angry” comment. [I do laugh at my own jokes, and even sarcasm. It’s a problem.] In fact, I now fully expect someone to comment what a fool I am to not recognize that I write about contentious topics, although I think my sarcasm was obvious. It is simply all too easy to read what one wishes to see in the writings of another.

I have heard more than once that the Talmud is deliberately cryptic for this reason. As we know, a neophyte cannot simply sit down with a Gemara and start reading. Rather, it requires years of training to be able to so much as read through a page on one’s own, even to understand which type of punctuation is implied at what point, where a sentence begins and ends, and whether it is a question or answer. While Artscroll may have removed much of the guesswork, one still needs a great deal of assistance to comprehend what the page intends to tell you.

As I said, I understand this to be no accident. Rather, Rav Ashi and Ravina wanted to preserve the Oral Law, yet require that a student acquire the skills necessary by learning with a teacher. Rebbe Yochanan did precisely the same; in fact, the Yerushalmi is still less comprehensible to beginners. They all recognized the very danger that is the topic of our discussion. The chain of our Mesorah is not a trail of books.

In his response to you, R’ Avrohom, Prof. Kolbrener wrote: “Confining the legacy of R. Soloveitchik to that ever-contracting circle, the batei midrashim, is a much surer way of ‘killing off’ the reputation of the Rav, and consigning his legacy to antiquarians and the already converted.”

I believe this very revealing quote confirms that the phenomenon I mentioned earlier is relevant here. Prof. Kolbrener fell into the trap of reading the material in a way that confirmed what he wished to find.

With no embarrassment, I had to look up “antiquarian.” It means a person who studies or collects antiques. And let’s be honest: to one who looks at physical age, a 3300-year-old document is an antique. The Talmud is an antique. The Mishnah Berurah is called “recent” yet is a century old, and, like more modern halachic literature, builds upon earlier conclusions and applies very ancient principles to new situations. These are the “antiques” under discussion in this context.

In other words, Prof. Kolbrenner believes it would “kill off” the reputation of the author of Halakhic Man to leave his legacy in the hands of those studying Halakha. Need I say more?

Yes. Because he also defined the Batei Medrash as “that ever-contracting circle.”

He certainly didn’t mean this in any physical sense. It is well-established that the number and size of batei medrash is growing, and following an exponential curve at that. The Mir in Jerusalem was a single Beis Medrash a generation ago; now there are five buildings. A plethora of new institutions have opened and expanded at the same time, all over Israel and the United States. It’s easy to understand why there are housing issues in Lakewood, because hundreds of newly-married couples rent their first apartments there every month.

So it seems apparent that Prof. Kolbrener intends this in the sense of diversity of thought. This is an astounding statement, because there are now hundreds more teachers for these thousands more students, and all of these new teachers bring their own methodologies and opinions along with them — unless one believes that all of this expansion has been accompanied by increasing rigidity in terms of what types of thoughts are “acceptable.”

Without apology, that would be mistaken — actually, it defies logic. New teachers from diverse institutions mean increased diversity of thought. The surfeit of students means that it is easier, not harder, to gather a “critical mass” of them around a new set of ideas, whether or not they were ever previously considered acceptable. [See, for example, Open Orthodoxy, committed to beliefs that R’ Avi Weiss himself said were not permissible less than two decades ago.]

It is the same circle. It’s called the “dalet amos of Halacha,” and it’s not getting tighter. It’s just getting a lot more crowded. To an ever-increasing extent, Jews are recognizing that our place is within that circle. Which, even for those minimally familiar withRav Soloveitchik’s writing, we recognize as the central topic of Halakhic Man.