The Rav Lives – A Reply to Dr. William Kolbrener 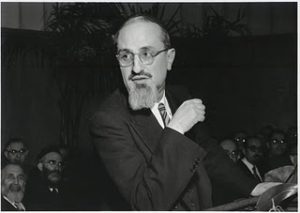 Dr. William Kolbrener’s Lehrhaus essay Killing Off the Rav (So He May Live) employs attention-grabbing, sensationalist metaphor to argue that third-party depictions of Rav Yosef Ber Soloveitchik zt”l must be ignored in order for contemporary Jews to access the firsthand teachings of the authentic Rav Soloveitchik and properly benefit from the real article, so to say.

Dr. Kolbrener has written a book about his vision of the Rav’s ideology. Dr. Alan Brill, in his introduction to a lengthy interview with Dr. Kolbrener, encapsulates Dr. Kolbrener’s approach:

In this new volume, Kolbrener paints Soloveitchik as an irreconcilably torn personality and as a complex pluralist.  Soloveitchik writings, in this reading, become texts of pluralism, creativity, modernity, and self-creation, instead of the more popular presentation of his writings as geometric, analytic, and halakhic. Kolbrener admits that his method as a literary critic, allows him to interpret freely outside of Soloveitchik’s original meaning and context. He is certainly not attempting a conventional archival based biography or interviews. Hence, Soloveitchik, using critical theory, becomes a window on contemporary pluralism, gender studies, and psychoanalysis, not the more often used Centrist Orthodox lens of mesorah, submission, and anti-feminism.

Dr. Kolbrener continues along this trajectory in his new Lehrhaus essay, but focuses therein on how to how not to access the Rav’s original thought:

So Joseph Soloveitchik, like Milton, is one of the figures in intellectual history whose critics have broken down into opposing “opposing camps,” with each, as Lawrence Kaplan, the translator of Halakhic Man writes, “dismissing those features stressed by the other as secondary.” In a recent version of this internecine warfare, Nathan Cardozo, though touting the “brilliance” of Soloveitchik, finds him in the end to be “an old-fashioned Rosh Yeshiva,” “highly conservative,” who made “no practical breakthroughs in halakha.” If only, Cardozo suggests, Soloveitchik had been more like the more radical and innovative Eliezer Berkovits, or even Emanuel Rackman, Modern Orthodoxy would have truly had an advocate for the twenty-first century.

On the other side, Soloveitchik has become a “poster-boy” for an almost Haredi Orthodoxy, ideologically and theologically conservative, his engagement with secular studies, ostensibly misunderstood by some of his followers as innovative, in reality just part of a strategy to win over Americans.  For Avrohom Gordimer, apologist for this right-wing Soloveitchik, the latter was defined by a core that “was pure Torah and yiras shamayim.”

… What some will certainly find a discomforting conclusion follows: in order for Soloveitchik’s reputation to live for us today, he first has to be ‘‘killed off.” Soloveitchik understood the principle informing this himself, realizing that he could only become himself—in what he saw to be the ultimate hiddush or creative act, self-creation—by metaphorically killing off his own fathers, the ‘halakhic men’ whom he both revered and against whom he rebelled.  For Soloveitchik to become urgent again (as he should be), we must move past the conversation—or polemical disputes—between proponents or opponents of different versions of “Soloveitchik,” and re-read him with both critical and open minds.  This will mean adopting the methodological pluralism that Soloveitchik himself advocated in Halakhic Mind in his approach to “religious philosophy”—his commitment to “thick description” and a variety of different interpretive perspectives. We may read Soloveitchik now with reverence or critique—or both—but we should move past the tired oppositions of previous critical approaches and recognize different modes of reading, so that Soloveitchik can speak to us, as he should, in the twenty-first century.

Let’s move min ha-kal el ha-kaved – from the easier matters to the more weighty ones:

It may come as a shock, but upon a close reading of Rabbi Cardozo’s article and my response, it clearly emerges that we do not argue about whom the Rav was. Our argument is about whom the Rav should have been. While Rabbi Cardozo laments the Rav’s refusal to permit Kohanim to marry divorcees, to engage Biblical Criticism and to create a progressive halachic system – for the Rav should have made his mark in these areas and thereby created a maverick legacy, argues Rabbi Cardozo – I passionately respect and appreciate the Rav’s orthodox positions on these matters. Rabbi Cardozo and I both agree on who the Rav was, so to say: a very complex and sophisticated traditionalist, who delved into and mastered modern thought but who held steadfast to the mesorah of his forebears as his core and essence , albeit often using very different language and applications which on the surface may seem to conflict with the older tradition. Rabbi Cardozo and I do not really present contradictory views of the Rav.

Dr. Kolbrener’s understanding of Rav Soloveitchik is the product of subjecting the Rav’s philosophical works to literary criticism, from which emerges a personality portrait of the Rav and a depiction of his underlying tensions, ideals, emotions and aspirations; this provides insight into treasures of modern intellectual and epistemological contributions. While Dr. Kolbrener’s approach is a normal tool of the trade for scholars of literature, the Rav was far greater than his handful of books and essays on philosophical matters. The Rav was a full-time rosh yeshiva and rabbinic leader (“I’m a melamed” was how he described his career), who devoted tens of thousands of hours of his life to teaching Gemara, as well as Halacha and Torah She’biksav, to a dizzying number of talmidim. This critical and paramount accentuation, as well as the content of the myriad of the Rav’s shiurim, must loom large and serve as a predominant factor in understanding the Rav. (In fact, one who listens to or reads even a minor sampling of the hundreds of derashos of the Rav that have been published is immediately captivated by the Rav’s intense and unqualified expressions of love and subjugation toward the mesorah of his forebears, and his uncompromising insistence of its perpetuation on his part as the fulfillment of his calling and very being. After even cursory exposure to these derashos – especially those in which the Rav speaks of his own orientation and emotions – it is nearly impossible to entertain Dr. Kolbrener’s contrarian postulates.)

The above disparity is to be noted in an introductory, parenthetical remark in Dr. Kolbrener’s essay: “… Soloveitchik, a major theologian of the late twentieth century (a distinction more important than that bestowed with the title ‘the Rav’)”. I must disagree. Rav Soloveitchik was a major theologian, but his primary lifework and focus were precisely denoted by “the Rav”.

Furthermore, when dealing with master disseminators of Torah – rebbeim – one cannot sever their temporal existence and their writings  from their eternal and living legacies. One must look to the closest disciples of a Torah disseminator to determine his focal impact and long-term emphases, and to understand the traditions, insights and attitudes he transmitted and exemplified. When dealing with Rav Soloveitchik, this means turning to his most accomplished students, who were intimately exposed to him, his ideas and teachings for extended periods of time, and who received from him a live and dynamic mesorah. When this indispensable and dispositive factor is considered, quite a different picture leaps forth – a picture of the doyen of halachic conceptualization, the ba’al ha-mesorah par excellence, and the eloquent spokesman for Torah in modern society. While methodological pluralism (as opposed to religious or faith pluralism) is a critical feature of the Rav’s thought, and it is an immensely beneficial approach to contemporary intellectual-theological confrontations, neither it nor various other ingenious and novel philosophical offerings of the Rav constitute his principal and focal contribution to contemporary Jewish life.

Modern Orthodoxy is in crisis, and those on the edge have often been exposed to the Rav’s philosophy but were unfortunately not stirred. The legacy of the Rav will play out successfully among the firmly committed (and those sincerely open to firm commitment), very much including the batei medrash of the “yeshiva world”, where the Rav’s Torah is being increasingly sought after.

We conclude with an important letter by Rav Aharon Lichtenstein zt”l, penned in response to the portrayal of Rav Soloveitchik by representatives of the now-defunct Edah organization. Rav Lichtenstein wrote:

(T)he Rav’s essence was manifested not only in philosophical writings he authored, but in theological principles to which he was committed and, above all, in a rigorous halachic discipline, which was both his patrimony and his legacy. These, as the Rav’s innermost being, were forged in the tradition of Brisk rather than in Berlin; lamentably they are not sufficiently shared by significant segments of our contemporary community and its spokesmen. While innovative in some areas, the Rav was highly conservative with respect to the text and context of tefillah as traditionally constituted in its classical corpus and in the fabric of a shul. He was unstintingly tenacious in insisting upon the autonomy of Halacha and the rejection of historicism; in placing lamdut, in the realms of theory and practice both, at the epicenter of Jewish life and in predicating the authority of Hazal as its polestar… Had the Rav been compelled to choose between what Ms. Kessler describes as “the fervently yeshiva world” and its denigrators, there is not a shadow of a doubt as to what his decision would have been.