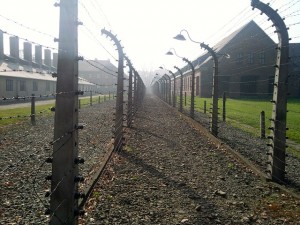 Even the days associated with the Shoah have become nightmares. In recent times, Jews have been uninvited from Holocaust remembrance ceremonies, in deference to Muslim requests. Anti-Semitic acts have skyrocketed in Europe, and a majority of French Jews have considered making the move to Israel. Angela Merkel concedes that Muslim immigrants from countries saturated with anti-Israel and anti-Jewish sentiment have introduced a new dimension to anti-Semitism in Germany. Ironically, Russia seems to be the safest place for European Jews. As my colleague, Rabbi Abraham Cooper put it in an article in the LA Jewish Journal, as the UN remembers six million dead Jews who were murdered in the Holocaust, its Secretary-General endangers the lives of six million live ones.

To help us remember how we should be reflecting on Churban Europe, we offer some thoughts by R. Shmuel Landesman, a recent guest contributor to this site. They are a foil to what has happened elsewhere on International Holocaust Remembrance Day, January 27th

brutal, cruel and rapid fashion. Having been born over two decades after the end of World

to the Eyewitnesses. Please let me share some of what I saw and heard from them.

lived for nine months in the rafters of a women’s concentration camp at the age of 5. He has

no idea how he survived and wasn’t caught or didn’t die of starvation/malnutrition. He says it

Bronspeigel speak publicly about what he went through. When an audience member

suggested the Holocaust happened due to the decline in religious observance, Rav

Bronspiegel interrupted him and said, “I came from the Gerrer Chasidim in Poland. You

cannot get frummer than the Gerrer Chasidim of Poland. No Kehilla has yet replicated the

My rebbi says he doesn’t judge Holocaust survivors who did not stay frum. “It was easy for

me to stay frum because both my parents survived, which was very unusual. However, most

of Leis din v’leis Dayan (There’s no Judgment and no Judge.) You cannot imagine the despair

Yidden in Poland felt after the War.”

My rebbi also pointed out that unlike for Spain in 1492; the Chachamim of the generation

did not put a Cheirem against going to Germany. That’s because in the mid and late 1940’s,

place for Polish Yidden was the American military zone in Germany, which is where his family

escaped to. By the time all the Yidden left Germany in the 1950’s it was too late to make a

Around 25 years ago, I met an older woman from the Bronx. She asked me if I heard of the

Alexander Rebbe. [Alexander was one of the largest Chasidic groups in Europe, with 100,

000 Chasidim. Basically, none survived.] I told her I did.

“I came from Alexander Chasidim. My older sister was married to the bechor of the Rebbe,

meaning, she would be the next Alexander Rebbitzen. As you can imagine, I was engaged to

the best bachur in the Alexander Yeshiva. Then came Hitler. Everyone was killed – my

choson, my family, the Rebbe’s family. Everyone. But, even worse. They experimented on me

because I was a twin. The German doctor injected me with Lupus. I got so sick. Suddenly,

the War ended. I spent a year in an American military hospital. The Lupus prevented me

from getting married after the War. I remain too sick to be married.”

(We were both crying.)

“Please tell me. What Aveirah could I have possibly done to deserve this fate in life”?

I still tremble over that question.

Belsen. Her relatives told her to eat whatever food she could get her hands on regardless

of Kashrus. Yet, while she ate the soup at night, she always gave the treif piece of meat

away to another prisoner. I asked her why, since she was halachically allowed to eat the

“I didn’t think I’d get out of Bergen Belsen alive, so I wanted to die without having defiled

my body with treif meat.”

Nazi labor camp. The punishment for putting on tefilin was to be beaten unconscious the

tefillin. I also asked him why since we are not obligated to risk our lives to lay tefillin.

“I didn’t think I’d survive the War. So, I didn’t want the Nazis to have the victory of

preventing me from laying tefilin”.

While I have had the privilege of knowing such special Yidden, my children, unfortunately,

have not had the same privilege. Their Yiddishkeit is much poorer for it.