The Face of Apartheid Israel 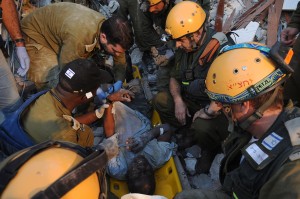 This picture says so much about those racist Israelis. It proves that Israel is an apartheid state.

Immanuel had been entombed in a concrete coffin for nine days. A victim of the Haiti earthquake, he had heard the searchers probing above – and then heard them conclude that since no one could still be alive below, they ought to move on to look elsewhere. He knew that there was nothing else to do but wait for his death.

He was wrong. An Israeli search and rescue team extracted him, as they did many others, working where others had given up. They laboriously cut through layers of rubble, releasing Immanuel and bringing him out while the crowd around yelled, “We love Israel!” As Immanuel saw light for the first time in nine days, the very first image before his eyes was of an Israeli physician who was palpitating him, checking for breaks and damage.

As an apartheid country, of course, Israel made sure that the physician who treated this black victim was a black, Jewish Ethiopian doctor. White Israelis, it seems, would not touch a black person.

The other members of the team who had flown thousands of miles to set up the most successful operation in Haiti were white. But we all know that the reason they were there was to steal organs from Haitians. There could be no other explanation. Israelis are, after all, apartheid racists. Everyone knows that.

You can read the rest of the story here, but I wouldn’t believe it if I were you. It was written by a Zionist agent.

[Thanks to Major Liron Shapira and the IDF for providing the picture.]