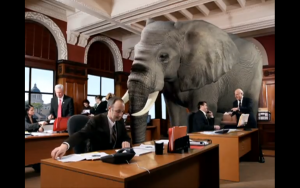 That was what an old-time comedian claimed his mother-in-law said when she saw him wearing one of the two neckties she gave him on his birthday.

The line comes to mind amid the lamentations over the lifting of sanctions on Iran in the wake of the country’s compliance with a main part of the deal it struck last year with the U.S. and other nations. Iran has shipped 98 percent of its fuel to Russia, dismantled more than 12,000 centrifuges so they cannot enrich uranium, and poured cement into the core of a reactor designed to produce plutonium, the other path to a nuclear weapon.

In return, though, the U.S. and its partners agreed to lift international sanctions that had crippled Iran’s economy, releasing many billions in frozen oil-sale assets. That’s not good news for the world, to be sure. Iran is the greatest sponsor of terrorism in the world, and its religious leaders, who control the country, harbor a homicidal antagonism toward, among others, Israel. The country was a most worthy candidate for membership in what George W. Bush named the Axis of Evil, and remains so.

Iran’s current leadership didn’t enter into the agreement out of any desire for peace or willingness to curb its nuclear ambitions. It was brought to its economic knees by the sanctions (ridiculed as worthless when enacted), nothing more.

Still and all, seeing only the necktie not worn, the downside of the deal, isn’t right or wise. There’s no question that the Western world’s high-stakes diplomacy with regard to Iran has made the world safer, at least for the next 10 to 15 years.

No one who isn’t a navi can know. But for those inclined toward informed prognostication, something to consider is the elephant in the Iranian room.

That would be the fact that the country has, in effect, two governments. One is the elected administration of its president, Hassan Rouhani, which includes his Western-educated foreign minister, Mohammad Javad Zarif.
.
The other is the unelected clerical and military power center, the Revolutionary Guards, controlled by Iranian “Supreme Leader” Ali Khamenei, who, in the end, currently rules the roost.

Mr. Rouhani is considered reformist and pragmatic. While he toes the anti-Israel “occupier” line, he famously condemned the Nazis’ murder of Jews during the Holocaust, in pointed contrast to his predecessor Mahmoud Ahmadinejad.

Mr. Khamenei, on the other hand, although he held his nose and permitted the Iran deal to go forward, makes no bones about his antipathy (to put it mildly) toward the West, spewing anti-American and anti-Israel venom in practically all of his speeches.

And since the nuclear agreement was reached in July, his security forces have stepped up arrests of political opponents, a crackdown seen as ensuring that hardliners dominate in national elections scheduled for Feb. 26, when voters will choose a new parliament and the administrative body empowered to select the successor to the 76-year-old and ailing Khamenei.

Some observers, however, see the hard-liners’ assertiveness as evidencing panic, born of what they perceive as a confluence of internal unrest – particularly among young Iranians, who chafe under the regime’s strict religious rules, and who protested en masse against the government in 2009 – and the impact of newly opened avenues to the West.

An Iranian businessman in Tehran recently told a visiting European delegation in hushed tones that “the fear is penetration from the West through business… They want to send the message that they still count.”

Hard-liners are trying to limit the number of reformist politicians eligible to run in next month’s election. But Iranian analysts and politicians contend that Mr. Rouhani is working with a coalition of loyalists, technocrats and moderate religious leaders, in an effort to gain control of parliament.

Mindful of Chazal’s teaching that the only semblance of nevuah these days resides in children and fools (and well aware that my childhood lies in the distant past), I will not attempt to predict whither Iran is headed – whether, by the time the Iran deal’s term expires, the country’s government will be as intractably malevolent as it is under its current high administration, or whether a new generation of Iranians, having come of age since the “Islamic Republic” was created in 1979 and unhappy with its policies and rules, will have assumed the mantle of leadership.

Will the Western world’s gamble pay off? None of us can know. But we can hope that it will, and be mispallel.