Memo to: the National Football League 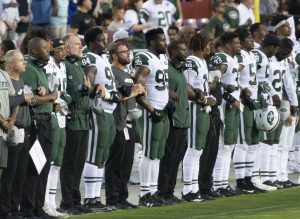 There are reports that, if and when football season opens, you will be instituting, at the beginning of every game, the singing of the Black national anthem following the Star-Spangled Banner. Since there is no official Black anthem, some have suggested that a classic Negro spiritual take its place The purpose would be to heighten awareness of the endemic police brutality against Blacks in America.

To honor those whose history is marked by persecution and suffering is a splendid idea. Certainly the magnificent spiritual , “He’s Got the Whole World In His Hands,” would serve as a soothing balm to the anger and violence of recent days.

In this regard, it is obvious that the Jewish people are not strangers to suffering, so it would be only right also to institute the singing of that spiritual Jewish ballad, Adon Olam. Its climactic words, “In His hands I entrust my spirit, He is with me, I shall not fear”– words which are uncannily echoed by the Black spiritual — are a fitting testament to systemic faith in the midst of persecution Since it is recited at the opening of Jewish daily worship, it would be appropriate to sing just before the opening kickoff – especially since its theme is that God literally opened up the world.

But we must be fair. It would be an injustice to Britain if we began the game without recognizing that England gave us the ultimate blueprint for freedom, the Magna Carta. Without it, there would be no racial justice, and mankind would still be living under tyranny. The Magna Carta underscored that all lives matter. Therefore, the anthem, “God Save the Queen,” would be most fitting before the big game. Imagine the frisson of excitement in the crowd waiting to trounce the visiting team as they hear the final words of the anthem: “Scatter our enemies, /make them fall/ God save us all.” This is a suitable tribute to liberty, plus a prayer for the resounding defeat of the opposition whom God will hopefully “scatter and make fall.”

If the USA, Blacks, Jews, and England are represented, certainly the French also deserve recognition. The French Revolution spoke truth to power when they courageously stormed the Bastille. Their rage and frustration fought gendarme violence and underfunded them and the systemic racism that plagued French society. Beyond this, France helped the colonies in the Revolutionary War, and everyone recalls that the great French military genius, Marquis de La Fayette was a heroic general in the Revolutionary Army . Therefore it would be an injustice to omit the Marsellaise from the pre-game anthems. … Le jour de gloire est arrive, “the day of glory has arrived,” is a stirring salute to liberte, egalite, fraternite, a felicitous prelude to the glorious game about to begin.

But while remembering all suffering peoples, we must not forget that in its war against Nazi Germany, Russia lost almost twenty million soldiers. Had Russia not defeated the wehrmacht in the bloody battles of Stalingrad and Moscow, Fascism would have conquered the world. Football fans, when they yell “Dee-fense! Dee-fense! Dee-fense!” should honor the heroic Russian defenders of freedom, without whom there would be no football today, and should remember Russian suffering by singing the stirring words of their national anthem: “the Russian eagle hovers high, leading our people to victory.” The thunderous sound of thousands of football fans lustily belting out Rossiya-suyashchennaya nasha derzhava would send a rush of adrenalin through the veins of all die- hard football fans.

Granted, with a total of six full anthems to be sung before the game, it might not leave much time for the game itself. Therefore, in order to allow time for each anthem to be respectfully sung in its entirety, it might be necessary to abbreviate the actual playing time. Instead of four quarters of fifteen minutes each, we might limit each quarter to five minutes. Granted, this could make some folks unhappy, but in these trying times we must set priorities and express solidarity with those who have fought against social inequities. Five- minute quarters would be a small sacrifice to show our gratitude and appreciation.

The NFL is to be saluted for its willingness to recognize the bitter history of bigotry and to engage in healing dialogue. Your commitment to justice and your courageous resistance against powerful interests that who would stifle such expressions at football games is commendable. NFL stands as an example to those in our society who would invariably succumb to the slightest pressure. A thousand throats blasting out these anthems would make a powerful statement: football is great but it does not matter that much, because , in the final analysis, human lives – black, yellow, brown, white, red – are all that matter.