Time for the Herd to Stampede: Measles Outbreak in Detroit 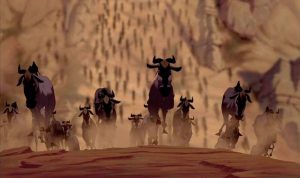 I’m in Detroit, unhappily a not-uninvolved participant in what is going on around me. The situation is somewhere between precaution and panic, the latter averted only because of strong, deliberate action by community rabbonim, Hatzola, and the county medical authorities. It is strong testimony to the havoc that is wreaked upon us by the anti-vaxxers, and those who lack the spinal fortitude to firmly say “no” to them.

The current round began with a visitor from Israel, who picked up measles from one of the affected outbreak communities in the New York/New Jersey area. Interestingly, he had thought that he had contracted the disease as a child, and was immune. He wasn’t. The virus, although having a very short “shelf life” outside the body, is extremely virulent while active. The clock towards the end of the outbreak period (21 days after the last case reported) is reset every day as new victims are discovered.

Because so many people do not know if they were exposed, or whether they received any recommended booster shots as adults, everyone in the community has been urged to receive a new dose of the MMR vaccine, and people are lining up at Young Israel each day to receive the precautionary treatment.

BH, unlike Yerushalayim, there have been no deaths. Still, the interference with the life of a community is enormous. People – at least those not yet immunized – have been urged to stay away from crowds. Travel has been disrupted. Friends and relatives of the honorees at the annual Kollel dinner (my son is one of them) have cancelled their flights. The community rabbonim issued a statement in the strongest terms banning anyone with any suspect symptoms from going to shul, school, or mingling with others. The immuno-suppressed (who cannot receive the vaccine) are worrying their heads off.

The chilul Hashem is enormous. Local outlets have identified the source of the outbreaks around the country as Orthodox communities. Detroit is not a community that “deserves” this treatment. There is no anti-vaxx lobby here; the frum community is solidly mainstream regarding inoculations. (My son was wise enough to call a few of them to demonstrate that the vast majority of the community vaccinate, distance themselves from the nonsense of the anti-vaxxers, and fully support the efforts to control the outbreak.) It is as if the medieval rumors of Jews spreading the Black Death had come back – only this time, with a factual basis. It is a mark of shame upon us that we are being associated with the mindlessness and selfishness of the LA celebrity community, which was what used to be linked to the anti-vaccination stupidity. It is not just us who look like members of the Flat Earth Society. Torah itself is shamed thereby. And, with anti-Semitism menacing to a greater extent all the time, projecting an image of dumb Jews creating a health hazard for their neighbors is not what we need right now.

The release by the local rabbinate was impressive, and did not mince words. It fully embraced the right of the community to protect itself from the errors of the uncomprehending and the conspiratorialists. Schools and others have the full right to ban unimmunized children. No exceptions allowed, other than those who have medical reasons, and then only if attested to by a physician who is known to otherwise support vaccination, rather than the rogue medical bad apple.

The time is long past for plugging up the last holes in the wall of our community resolve. The Torah community has the right and sanction to take action against individuals who compromise the well-being of everyone else, no matter what they hide behind.