The Battle for Orthodoxy Repeats Itself Half a Century Later 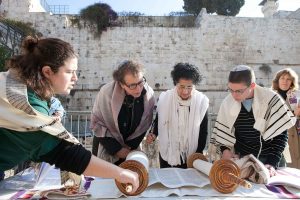 As was to be expected, the leadership and organs of Open Orthodoxy are not too happy (to put it mildly) with the OU’s decision to put a stop to female clergy in OU member shuls.

(T)he OU does not get to define what is Orthodox. (The OU statement is) horrible.

These men in the leadership of the OU don’t want to give proper credit and respect to women. When they came to our office, they spoke to the maharats and asked them to change their title. The chutzpah. I feel that there is very weak leadership at the helm of this organization.

They said that they will reevaluate in three years. I pray that in these three years, the OU will be reevaluated, that there will be new leadership that will not be so narrow-minded and short-sighted, and that they can grow and be a more open and inclusive organization.

The OU, itself has stated that it has chosen the single issue of women’s spiritual leadership to project itself as Orthodoxy’s gatekeeper rather than as its facilitator.

By choosing to enforce standards that exclude Orthodox colleagues in avodat Hakodesh who demonstrate in their work and personal practice a complete commitment to Orthodoxy and halakha, the OU is reversing decades of precedent and good will, and enacting bad policy.

We believe the OU is missing a historic opportunity to truly promote women’s spiritual leadership across the spectrum of our diverse Orthodox community. By doing so, it is squandering its role as a unifying force in the community.

It is ironic that Rabbi Herzfeld and IRF label the OU as narrow-minded and excluding others from Orthodoxy, while Rabbi Herzfeld and IRF conveniently forget that Orthodoxy – Torah – is a set of rules and standards, and is not a piece of Silly Putty that can be defined as one likes and that can be bent into whatever one desires (even though a quick perusal of Open Orthodox practices and beliefs leads one to the conclusion that this denomination maintains that Orthodoxy is another word for “everything goes”.)

It is ironic that Rabbi Herzfeld and IRF negate the concept of Orthodox Judaism being anchored in the consensus of halachic rulings by the generation’s most preeminent rabbinic leaders (e.g. here, here and here) and instead insist on rabbinic autonomy in the weightiest and most potentially divisive of areas, including Who is a Jew and Who is a Rabbi. YCT and YM leadership have led their denomination down a path of unilateralism and fragmentation, encouraging each rabbi to decide his (and her!) own standards. Hence have Open Orthodox clergy penned responsa that materially reform conversion regulations, synagogue practices, and much, much more.

It is ironic that Rabbi Herzfeld and IRF accuse the OU of divisiveness, when it is Rabbi Herzfeld, IRF, and the Open Orthodox denomination that have knowingly and deliberately broken away from mainstream Orthodoxy and consensus halachic practice, knowing that Orthodox leadership did not sanction their radical actions and novel approach to Judaism. Rabbi Herzfeld nastily said of the OU, “the chutzpah”; I’m afraid that Rabbi Herzfeld should have rather focused that remark inward.

If this is not a case of the pot calling the kettle black, then I do not know what is.

The OU has taken a principled stand and most necessary step to preserve Torah, following a broad-based ruling of the generation’s foremost rabbinic leaders. The OU’s actions harken back to the mechitzah issue of half a century ago, when the practices of progressive congregations threatened the integrity of Torah Judaism and Orthodox authenticity.

To quote the eternally applicable words of Rav Soloveitchik regarding that watershed battle for the stability and perpetuation of Orthodoxy:

It is completely irrelevant to our problem whether fifty or five percent of the membership of the RCA occupies pulpits in synagogues with improper seating arrangements. The violation of a religious, ethical principle does not affect its validity and cogency even though a large segment of the community is engaged in doing so. A transcendental tenet is binding regardless of its unpopularity with the multitudes. Was the commandment against murder declared null and void while the Nazi hordes were practicing genocide?

The Rabbinical Council of America stands now at the crossroads; and must decide to either assume boldly and courageously the time-honored, by-ages-sanctified role of the traditional rabbinate which traces its history back to Joshua, Moses and Sinai, and thus be ready to fight for an undiluted Halakhah which is not often in the vogue; or to deteriorate into a so-called modern rabbinic group of undefined quality and of a confused ideology, vague in its attitude and undecided in is policies…

I call on the convention to make its stand clear on this problem, and to break finally with the policy of evading issues and employing ambiguities and inconsistencies. Matters have gone too far…