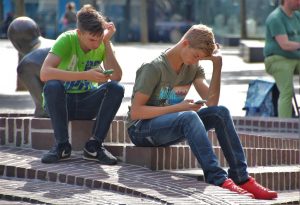 Rabbi Yitzchok Adlerstein’s article, How Bad Are Smartphones?, provides much food for thought. The often unnoticed yet acute damage which smartphone addiction causes needs to be considered and addressed.

I would like to expand on this theme, for even though one might assume that the primary victim of smartphone addiction is the user, and that the resultant impairments are manifest in terms of social isolation and depression – both of which are really major issues – the damage is far more extensive and deep.

The pervasive problems brought about by smartphone addiction that are depicted in Rabbi Adlerstein’s article are in truth problems associated with intemperate internet use – they are not smartphone issues per se. However, these problems have become amplified, as smartphones bring the internet to one’s pocket and hands 24/7, enabling one to remain fixated on nonstop online action during every waking moment.

I am a heavy-duty smartphone user. In order to perform my “day” job properly, I absolutely must have 24-hour online access. Urgent matters arise outside of regular business hours, and with smartphone notification and quick follow-up action, things are normally able to be worked out and major problems averted, BH. It is also essential for me to be on top of my work while out of the office, as the activity does not stop and goes far beyond New York business hours. I thus write this fully aware of the importance of smartphones and as a committed user myself.

That said, I am often stunned by what I see around me in terms of smartphone (ab)use.

Two weeks ago, I was in a restaurant, seated near the entrance, as a woman and her toddler son came in. The woman was typing on her smartphone, and she almost let the door slam in the face of her child. (This two or three year-old was then able to push the door open on his own, after his mother let it start closing on him, distracted with typing.)

Later that week, I witnessed a parent who was warned about dangerous (very small – choking hazard) objects on the floor next to her baby, but since she was engrossed with her smartphone, she did not hear the warning, and it took several times until she finally got the message.

Last year, I had the chance to save someone’s life. The incident, which lasted for no more than five or ten seconds, was spine-chilling. As I was about to cross a small street lined with parked cars, I noticed that several feet in front of me walked a young man with a yarmulke who was typing on his smartphone, with his head down and his eyes glued to the screen. Suddenly, a car began to drive by, but its view was somewhat blocked by the row of parked cars. This young man, totally distracted by his smartphone, proceeded to walk between the parked cars and straight into the path of the oncoming car, which could only be noticed by one paying attention to the street. I screamed several times to the young man to stop (I wanted to call him by name, but it was too dark to read the name embroidered into his yarmulke), and after several loud shouts, he did stop, literally inches (or less) from the moving car that was about to take his life. The car driver was furious with the young man for walking straight into traffic and placing himself in the path of the car, and I gestured to the young man to “wake up” and watch where he was going from now on. The young man’s response: a nasty sneer to the car driver and to me, as if we were bothering him – after which the young man’s eyes returned down to his smartphone screen for the continuation of his trek, self-absorbed and oblivious to his surroundings, totally unaware of what had just occurred.

It is possible to become distracted and incognizant of others around us, but with smartphones (addiction to them, that is), being in this state is quite easy and even natural.

This concept, of being “in a different world”, is no longer applicable merely to “spacy” people or those on drugs or alcohol; it has become extremely commonplace with smartphone addiction, and it can impact the safety of others and self in very real terms.

Last week, at school orientation for my eighth grade son, the class’ rebbe gave all parents his cell phone number and asked that they feel free to contact him at all times by phone or text, and he then added:

I will call you back, but it may not be immediately, since I do not use my phone when I am in school, when I am with my children, or when I am learning.

Being focused on those in one’s care and on one’s task is crucial. How many smartphone users fail and succumb to this challenge?

Mesillas Yesharim (ch. 2) lists distractedness as one of the primary impediments to Teshuva and Avodas Hashem, as one is unable to set forth priorities and resolutely act upon them due to his mind being flooded with other things. An important lesson for Elul indeed.