Jewish students must realize that SJP is about hate — only hate 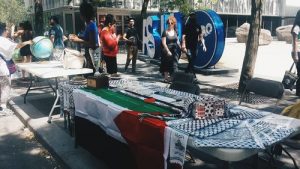 When students at Toronto’s Ryerson University Hillel proposed to their Student Union that the university participate in the broader Canadian Holocaust Awareness Week, they did not anticipate the jeers, snickers, and eventual walkout to prevent a quorum from approving the motion. Nor did they anticipate that this hateful behavior would be led by members of Students for Justice in Palestine (SJP).

In this respect, their shock is itself surprising.

Hillel students assumed SJP would respond as Hillel and most groups would respond were any minority group to propose an event promoting awareness of a tragedy that affected that community. Were someone to propose Native American Land Loss Week, or an event commemorating the Armenian or Rwandan genocide, Jewish groups would be (and have been) first to endorse and participate.

But Jewish students and their supporters were wrong to expect SJP supporters to conduct themselves in a civilized fashion. SJP is not about moral, decent behavior.

Ryerson student Tamar Lyons experienced firsthand the real agenda of SJP as well as the Muslim Students’ Association (MSA). An Emerson fellow with the Israel advocacy group StandWithUs, Lyons found herself feeling threatened while she stood in line at the Student Union meeting, waiting to voice her support for Holocaust Education Week.

In a conversation, with the Haym Salomon Center, Lyons explained, “The president of MSA and the vice president of SJP stood in front of me as I went to speak in support of a motion to have Holocaust Education Week. Knowing that I am a proud Jew and Zionist, they both glare at me and very aggressively tell me, ‘You need to sit down because there are too many of you,’ referring to Jews.”

The extent to which SJP will go in order to conceal its anti-Semitic agenda cannot be overstated. The group’s social media pages, including at Ryerson, claim that SJP “rejects and condemns any form of hatred or discrimination against any religious, racial, or ethnic group.”

SJP is, of course, the driving force behind the infamous Boycott, Divestment and Sanctions (BDS) movement on campus, which attempts to compare the State of Israel to the South African system of apartheid. Anyone who has seen Arabs and Jews working together in businesses across Israel, or watched Arab and Jewish patients treated equally in the nation’s hospitals, knows that this is bigotry. Indeed, it inverts reality: Israel is the only country in the region to not engage in ethnic cleansing. All of its neighbors now have less than 10 percent of their Jewish populations of a century ago—not so much because Jews wanted to leave, but because they were driven from their homes.

While the true intent of BDS is the destruction of Israel, it purports to “merely” call for Israel to abandon the holy cities and places forbidden to Jews by the Jordanian Army from 1948 to 1967.

BDS founder and SJP hero Omar Barghouti publicly promotes BDS, and freely admits that the movement’s goal is to exterminate the Jewish state.

In actuality, BDS has failed in terms of international investment and the isolation of Israel. After a decade of BDS activity, foreign direct investment in Israel is substantially higher. Israel is a leading provider of agricultural, technological, and medical products and services. One British minister claimed that were the U.K.’s National Health Service to boycott Israel, more than 100 million prescriptions would be affected—resulting in both increased expenses and patient deaths.

In American state legislatures, BDS has backfired. It used to be that a company could participate in the old Arab boycott and still do business with every U.S. state government. Thanks to BDS activity, dozens of these legislatures have already prohibited state contracts with businesses that boycott Israel, and many more states are taking up consideration of similar laws.

Yet there is one metric by which BDS is an unqualified success: inciting anti-Semitic hatred. Earlier this year, the AMCHA Initiative conducted a groundbreaking survey of more than 100 public and private U.S. colleges with the largest Jewish undergraduate populations. While anti-Semitic incidents were found on a disturbingly high 16 percent of campuses, that percentage rose to 99 percent on campuses with “anti-Israel” groups, including 100 percent of campuses with an SJP chapter. The presence of “anti-Israel” activity virtually guarantees anti-Semitic incidents.

Students must understand that SJP aligns itself with such paragons of human rights as Iran, Qatar, and Saudi Arabia. In testimony before Congress earlier this year, Jonathan Schanzer, a former U.S. Treasury Department official, traced the links between the murderous Hamas terror organization and leaders of American Muslims for Palestine, the off-campus funding source of SJP. Indeed, the AMP national campus coordinator recently called for Israel’s destruction and for individual Israelis to be murdered.

No one should realistically expect SJP members to behave in a moral or decent fashion, especially toward Jews. The disturbing reality is that it isn’t necessary for SJP activists to show any respect toward Jews because on college campuses and in many areas of polite society, anti-Semitism is part of the new normal.

“Anti-Semitism has become a socially accepted norm, a permissible form of hatred. And that is not okay,” Lyons, the Ryerson student, told the Haym Salomon Center. “The fact is that we are too afraid to call it what it is—afraid to say this is anti-Semitism, this is Jew-hatred.”

The impact of BDS and its proponents such as SJP may be losing ground in terms of their stated goals. But if Jews, especially millennials, refuse to call them out for being the bigots they are, it will only be a matter of time before they achieve world stage victories.

And those consequences will be deadly.