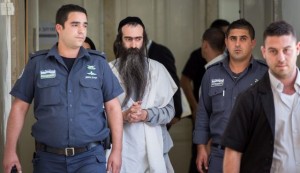 Not that this should surprise anyone, but we now know that Yishai Schlissel was diagnosed with serious mental issues, was hospitalized for over a month — and was released from prison, three weeks before the same parade that he attacked ten years earlier, without monitoring or supervision.

Two-time gay pride parade stabber Yishai Shlissel suffered “a psychotic incident,” Israeli news revealed Wednesday – and police still did not take this into account when he was released last month… In March 2009, Shlissel was transferred to psychiatric care from prison, where he was then treated for a month and a half after being diagnosed as a paranoid psychotic.

He may be deemed unfit to stand trial.

Earlier, a well-known blogger asserted that I was being “extremely defensive. To the point of paranoia,” when I posted that I suspected a wave of bigotry would come our way in the wake of this atrocity. Within hours, though, he’d been proven wrong — sadly, I was not paranoid, just perceptive in my prognostication.

Obviously, it is true that “not every outside critic is a bigot.” But I was not predicting constructive criticism — I was expecting calumny.

Though that writer insisted that “no one is slandering the entire Orthodox community,” an article entitled “The entire Hareidi community spilled this blood” appeared just hours after mine. Similarly, though he said “the message is not that Charedim have to change their Hashkafos,” Jay Michaelson of the Forward sent exactly that message, in an article entitled “The Ultra-Orthodox Hatred Behind the Stabbing at Jerusalem Gay Pride Parade,” in which he quoted a psychologist as saying “the entire Orthodox community is responsible for this attack when it cultivates a culture of hatred toward fellow Jews rather than acceptance and tolerance.” If the Torah does not accept male homosexual behavior and in fact calls it “to’evah,” then the Torah must be changed.

But the ultimate proof whether I am right, that this was not constructive outside criticism but rather bigotry, will be seen in the days to come. Will these authors apologize for their hasty rush to judgement of the charedi community, now that it has become known that Schlissel was, in fact, crazy? If they do, then I will be delighted to say that I was wrong, as well.