Say It Ain’t So, Mike 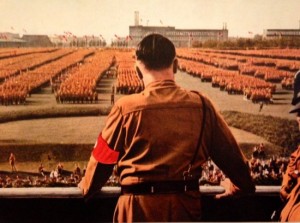 In 1990, attorney Mike Godwin introduced what became known as “Godwin’s Law,” the contention that if an electronic discussion (regardless of topic or scope) goes on for long enough, sooner or later someone will compare someone to Hitler, ym”s.

Philosopher Leo Strauss referenced something similar back in 1951, coining the means of argument that compares an opponent’s view to that of Hitler as “reductio ad Hitlerum.”

Over recent weeks some critics of the U.S. administration have characterized its approach to curbing Iran’s nuclear weapons as dangerous appeasement, and President Obama as a reincarnation of British Prime Minister Neville Chamberlain, who famously crowed that the 1938 Munich Agreement with Germany heralded “peace for our time.” Less than a year later, of course, Germany would invade Poland and Europe would be plunged into World War II.

Needless to say, even for those among us who consider the Iran deal ill-advised, there is a considerable gulf between proudly waving a piece of paper as proof of an evil man’s good will and an arduously crafted and enforceable agreement requiring an evil regime’s submission to intrusive inspections and monitoring.

But, inflated though it was, the Obama-Chamberlain comparison was one thing.

Another thing entirely was Republican presidential candidate Mike Huckabee’s contention last week that President Obama was marching Israelis “to the door of the oven.” The candidate – no other way to read it – was calling the president a Nazi.

I have personally always found Mr. Huckabee’s voice to be a refreshing one in the political arena. On moral and educational issues, the former Arkansas governor and Southern Baptist minister generally reflects ideals valued by most religious Jews. He has visited Israel numerous times. And he has a sense of humor (very important in my book), as evident in his naming the musical band he formed, “Capitol Offense.”

To be sure, the designs of Iran’s leaders today can certainly be compared to those of Germany’s 77 years ago. That doesn’t, however, make anyone who wants to thwart Iran’s nuclear weapon dreams without declaring war a Hitler.

Criticism of Mr. Huckabee’s words drew fire not only from Democratic politicians but from nonpartisan groups like the ADL, and from Israeli officials. Israel’s ambassador to Washington, Ron Dermer, called the comment inappropriate and Israeli Transport Minister Yisrael Katz, while stressing that Mr. Huckabee was “genuinely concerned” with Israel’s future, said: “Dear Mr. Huckabee, no one is marching Jews to the ovens anymore.”

Mr. Katz’s chiding, however, came from a brash Zionist place, evident from his further words: “That is why we established the State of Israel and the Israel Defense Forces; and if necessary, we will know how to defend ourselves by ourselves.”

To those of us familiar with the phrase kochi v’otzem yadi, such braggadocio is saddening. In this case, though, it’s also entirely beside the point. What was offensive about Mr. Huckabee’s words wasn’t their insinuation that Israel is helpless; it was the vulgarity of the comment itself.

But there once was some degree of dignity that reined in excess when it came to political speech. No more, though. Decorum has left the building.

Part of the blame, of course, is the media. Not just talk radio and other electronic forms of verbal blood sport. But print media too, which seem to endorse not only “If it bleeds, it leads,” but “If it’s hating, it’s a high rating.”

And so, politicians eager for attention vie to outdo each other (and in Mr. Trump’s case, to outdo himself) in outrageousness, hoping to seize the news cycle for a day, or even a few hours. That all the shameful showboating seems to garner increased support says something about at least part of the contemporary electorate, and it’s not pretty.

What’s even more disturbing, though, is that even Jews are drawn into the jeering crowd around the boxing ring.

“The response from Jewish people,” Mr. Huckabee said as the criticism of his “oven” remark swirled around him, “has been overwhelming positive.” How overwhelmingly sad.

There’s hope, though. Later, the candidate admitted that, “Maybe the metaphor [of the oven] is not a good one.”

If he continues on that more thoughtful track, he may yet win back his dignity. And who knows? Maybe it will even prove contagious.