The Jerusalem “Pride Parade” and the Beruriah Doctrine 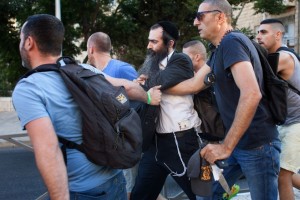 “May sinners (חטאים) be eradicated from the earth…” (Tehillim/Psalms 104:35). Beruriah, the erudite wife of the Talmudic sage Rebbe Meir, exposited the verse to convey not that sinners, but that sins, be eradicated. (Berachos 10a)

Unfortunately, in the context of the recent tragic killing of a 16 year-old girl by a deranged vigilante in Yerushalayim, we are witnessing Liberal Orthodox leaders blur the lines, and Open Orthodox/Neo-Conservative leaders take advantage of an opportunity to sell their wares and introduce novel and radical concepts into the discourse – concepts that contravene the “Beruriah Doctrine” and conflate sympathy for the sinner with sympathy for the sin. Yes, the unthinkable is occurring, as rabbis from the left are now according tolerance to relationships which the Torah bans in the harshest of terms. Rabbi Yaakov Medan, rosh yeshiva of Yeshivat Har Etzion, recently expressed serious concerns about this distinction. I would like to elaborate and amplify.

Rabbi Benny Lau, cousin of Chief Rabbi David Lau, rightfully condemned both the recent killing by the deranged vigilante, as well as lethal attacks in Judea-Samaria against Arab families by local rogue Jewish residents – yet the rabbi made his remarks at a gathering of IGI/Israel Gay Youth on a stage draped with a large Gay Pride Flag.

Would Rabbi Lau have stopped after delivering harsh condemnation of the offenders, that would be understood and welcome – but he also spoke about homosexual expression (“not living in a closet”) and about homophobia, a loaded term that implies a psychological disorder on the part of those who oppose homosexuality and/or its manifestation. Unfortunately, Rabbi Lau’s appearance at the IGI gathering, with the Gay Pride Flag in the background and all, served not only to condemn criminal acts of violence, but also to condone homosexual expression.

And we go further. In a new Haaretz article about Orthodoxy and homosexuality, senior Open Orthodox/Neo-Conservative rabbis indicated that Orthodox attitudes about homosexuality are substantially changing. Commenting on same-gender marriage, it is reported concerning Rabbi Dr. Daniel Sperber, who sits on the Yeshivat Maharat Advisory Board, serves as chancellor of a non-Orthodox rabbinical school, ordains women as rabbis at semicha programs in Yerushalayim and New York, and is the halachic authority behind several “partnership minyanim” (joint prayer groups led by both men and women):

Sperber thinks there may be a way around this. “The problem is with the word ‘marriage,’” he notes. “Perhaps they can call it something else like a ‘partnership.'”

This is shocking. A leading Open Orthodox/Neo-Conservative rabbi is proposing a form of homosexual wedlock that, in his opinion, Orthodox Judaism may be able to adopt and implement.

“The red lines are obvious,” says (Rabbi Ysoscher) Katz (Chair of Department of Talmud, YCT). “I don’t think you’ll find an Orthodox rabbi in the next 1,000 years who will rule that gay sex is allowed. At the same time, more and more Orthodox rabbis are starting to treat it as a genetic predisposition, and this raises a huge theological dilemma: If it’s not a choice, then how can God discriminate against these people?”… “The Torah makes clear that anal sex between two men is prohibited, but I like to talk about the ’50 shades of gay,’” explains Katz. “In other words, there are many other things they can do that are not expressly prohibited.”

Halachically, it is clear from the Shulchan Aruch (Even Ha-Ezer 24) and all earlier and later sources that men who share an attraction are not to be secluded together, even absent any physical contact. Rabbi Katz’ endorsement of homosexual physical intimacy short of the Biblically-prohibited act itself is thus contradicted by governing halachic sources. (It must also be pointed out, in reference to Rabbi Katz’ remarks, that we do not know and may never know the reason(s) as to why some people are homosexual. For centuries, homosexuality was considered to be a psychiatric disorder; the American Psychiatric Association changed its position on this in 1973. A (formerly?) homosexual man with whom I often speak swears to me that his homosexuality was caused by years of acute emotional abuse by his father: “I know exactly why I had those strong tendencies, and once I came to terms with it and worked things through decades later, I no longer had that attraction, and I guarantee you that 99.9% of gay men became that way due to very early emotional trauma… Anyone who says otherwise is in denial.” And, as Rabbi Katz points out, common contemporary thinking is that homosexuality is innate. The truth is that we may never know, yet that does not impact the Halacha.)

There is also a vital theological point that runs through (or against, to be precise) the approaches of the rabbis cited above. Inasmuch as people may not understand the Torah’s stance against homosexuality, and inasmuch as we must show empathy and be understanding of the struggles of those who experience same-gender attraction, we cannot dilute, downplay or disassociate in any way from the Torah’s position, nor can we deem the Torah’s position to be something with which we do not identify and which we seek to minimize and work around. Rather, we must adopt, embrace and defend it. As Rav Soloveitchik zt”l stated during a 1974 shiur in Boston (The Rav – Thinking Aloud on the Parsha: Sefer Bereshis, p.92):

A philosophy of [homo]sexualism is being preached throughout the Western world, to such an extent that a certain rabbi came to me and said, “How can we defend ourselves against it?” I told him, take out a Chumash and read a pasuk. ואת זכר לא תשכב משכבי אשה. (“You shall not lie with a male as with a woman.” –Vayikra/Leviticus 18:22)

In other words, we identify with the Torah and affirm our commitment to its dictates and values, without apologetics or excuses. (Please see here as well.)

It is this idea – the courage to embrace the Torah when it is not popular, when it clashes with contemporary values, and when it really goes against the grain of society – which signifies the emunah (genuine faith) of the Jew and elevates him. As Rav Soloveitchik explicated in a 1968 shiur to RIETS Rabbinic Alumni (The Rav – Thinking Aloud on the Parsha: Sefer Bereshis, pp. 193-194):

…If it’s easy, simple, elementary, justified – there is no need for faith… How does the sanctity of a Jew express itself? Through the interpretation of mitzvos.