Bamidbar – The Child Makes the Parent 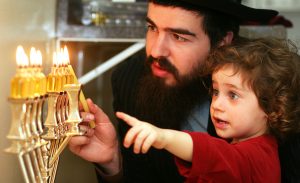 The reference in the parshah (Bamidbar, 3:4) to the fact of Nadav and Avihu’s childlessness can be read as a simple explanation for why further generations of their lines are absent from the Torah’s text. But Abba Ḥanan, in the name of Rabbi Eliezer, sees it as telegraphing much more, that “A man who does not engage in procreation is liable to death” (Yevamos 64a).

There are various reasons given for the meaning of the “strange fire” that those two of Aharon’s sons brought on the altar in the desert: That they didn’t accord their father due respect (Yalkut Shimoni, 524:5); that they had decided a law themselves in the presence of their teacher (Rashi, Vayikra, 10:2); that they had drunk wine before entering the Mishkan (ibid); that they spoke uncouthly between themselves about the eventual deaths of Moshe and Aharon (Sanhedrin, 52a).

The implication of the Gemara in Yevamos, though, is that, had they married and had children, they would not have perished.

Intriguing is the Chasam Sofer’s suggestion in explanation of that fact. He writes that a person doesn’t fully relate to how he should conduct himself vis-à-vis his superiors until he has children.  Then, he feels what lack of proper honor, which a child naturally exhibits, is like, and recognizes the imperative of such honor.

Had they had children, in other words, Nadav and Avihu would have been prevented from showing a lack of proper honor to Moshe and Aharon (and the Mishkan).

(Interestingly, our parshah also notes how even people who are biologically unable to have children can, in effect have them – by undertaking their tutelage. “Whoever teaches the Torah to the son of his fellow man is considered as if he had begotten him” (Rashi, Bamidbar 3:1, quoting Sanhedrin 19b).

And so, in addition to all the other reasons for seeing children as blessings – that having them is a mitzvah, that they hasten Mashiach, that they provide genealogical continuity, that they offer many joys, that they can eventually care for their elders, we might add one more:

That, even as we help them grow, they do the same for us.

My most recent Ami column, “The Great Defacement,” can be read here.