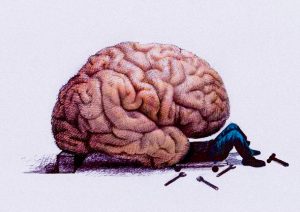 It seems that a good part of my youth was spent in a mental asylum without walls.

At least that’s how some mental health professionals might characterize it.

Among the boys in my neighborhood more than a half century ago was one who would today be called obsessive-compulsive, and another was firmly on the autism spectrum. Yet another seemed chronically depressed, and anxiety plagued another. Yet another would have been diagnosed as ADHD (attention-deficit/hyperactivity disordered, for anyone unfamiliar with the acronym) – had the diagnosis existed at the time.

I’m not exaggerating. The boys displayed classic symptoms of their respective “disorders.” But the rest of us kids somehow didn’t see the actions or moods or attitudes as emotional disorders, certainly not as mental illnesses, but only as quirks.

And the quirky kids were not medicated; they were integrated.

Yes, we were kids, occasionally mocking one another, and the quirky ones were occasional targets for joking. But so were the math prodigies, clumsy kids, sloppy kids or sports-obsessed ones. We all had our idiosyncrasies. But no one was treated meanly and everyone was accepted by everyone.

The memory of the “different” boys – all of whom, I suspect (and in some cases know), went on to live productive lives – came back to me when I read of the recent death of Dr. Bonnie Burstow, a Jewish psychotherapist and University of Toronto professor who was known as a major proponent of “anti-psychiatry.”

“Do I believe people have anxiety?” she once challenged listeners. “Do I believe that people feel compulsions? Of course. But I believe these feelings are a normal human way of experiencing reality.”

Now, she targeted not only minor emotional or behavioral peculiarities but things like schizophrenia as well. That would seem to be an overreach. Anyone walking on a Manhattan sidewalk knows that there are people who are well beyond quirky, who are seriously mentally impaired and in need of treatment or, at least, supervision.

That said, though, Dr. Burstow’s view on the over-medicalization of emotional illness is a worthy spur to further thought.

Not every oddity of behavior is a sickness. Should our first reaction to a child with a facial tic be to create a “persistent minor spasm malady” and seek drug treatment? Should a kid who is disobedient and rebellious be labeled with a diagnosis of – oh, I don’t know – “oppositional defiant disorder”?

Oh, scratch that. The disorder actually exists, at least in the view of the ever-changing and usually expanding “Diagnostic and Statistical Manual of Mental Disorders,” or DSM.

That American Psychiatric Association publication is considered authoritative and is used by clinicians, researchers, psychiatric drug regulation agencies, health insurance companies, drug companies and lawyers. (And it’s not delusional to wonder whether those last two categories might have some less-than-humanistic stake in the over-medicalization of emotional challenges.)

Too often missing, as well, from our conception of mental or emotional illness, I think, is the fact that, when it comes to attitudes and behaviors, there are spectra.

There is, for instance, a paranoia spectrum, at one end of which sits a person who is convinced that the CIA has tapped his phones, bugged his home and implanted a computer chip in his brain. At the other, though, is a person with a nagging suspicion that a particular other person or people are ill-disposed toward him. The suspicion may be wrong and unreasonable, but that doesn’t render the uneasy fellow a mental invalid. What’s more, he may be right. As a character in a work of fiction once observed, “Just because you’re paranoid doesn’t mean they aren’t after you.”

And aren’t many, if not most, of us somewhat obsessive or compulsive, at least in certain areas? We may not wash our hands fifty times a day, but we might regularly, just as we’ve closed the door to our homes behind us, turn back and go in to make sure we hadn’t left the oven on. And even the regular hand-washer isn’t necessarily in need of treatment. (In fact, he likely doesn’t often catch colds.)

And between the poles on each spectrum are many gradations. As the Rambam at the beginning of Hilchos Dei’os explains, people are born with certain sets of “default” middos at or between two extremes: Constantly angry, or never moved to anger; excessively prideful or exceptionally humble; ruled by physical appetites or undesirous of even legitimate needs; very greedy or reluctant to pursue even what he lacks; miserly or very generous; jocular or depressed; cruel or softhearted, cowardly or rash… And there is an entire scale of notches between each set of extremes.

While the Rambam, famously, does employ a medical mashal to characterize “off-balance” middos, he considers them normative human states treatable by contemplation, consultation with wise people and willpower.

Again, to be sure, there are mental disorders that require intervention, perhaps even including the use of chemicals.

But we do no one a service by ignoring some realities: “Normal” encompasses much more than some may think; psychological states exist on spectra; and people’s natural middos can, sans drugs, be changed.