An Arch of Titus Moment in Greece 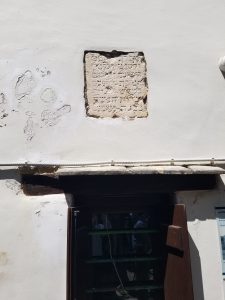 The story is attributed to many people. Could be that all of them are true. Someone gets out of a cab in Rome, walks over to Titus’ Arch, and shakes his fist. “Titus, Titus. I am here! Where are you?” He then returns to the car and drives off.

The last time I was in Rome, the famed arch was fenced off, and I couldn’t get close enough for the spirit of Titus to pay me much notice. Chol Hamoed on Crete, however, provided its own “take that!” moment, although to an earlier adversary.

On one of those family chol hamoed outings with lots of kids, we found ourselves in a pottery store in the hills on the north side of the island. The craftsman does a program for visitors, in which he demonstrates his craft, and then has them make their own. He first provides a good deal of history, including showing of interesting earthenware devices like a miniature jug that whistles like a bird, and an ingenious salt shaker that seems to work better than contemporary ones. Some of these devices go back to Second Temple days.

He showed how period materials were used to decorate the pottery after they were fired. The ancient black stain that was used, he said, was called d’yo. Instantly, a cascade of Greek words from the Talmud poured down my brain. D’yo. Kankantum. Duchsustus. Afikoman. Afiktozen. Apikorus. So many more, as the inside cover of my old Jastrow dictionary will testify. Taped to it is a key to the Greek alphabet, showing upper case and lower case forms of each Greek letter and its pronunciation. That allowed me to understand Jastrow’s etymologies, which I found important because of the sheer number of words in the gemara rooted in – or simply transliterations of – Greek.

What happened to the culture that so impacted the Jewish world in antiquity? (No, it didn’t begin or end with Chanukah.) To be sure, the Greek alphabet is alive and well. But Greece today is a country just a wee bit more populous than Israel, but not exactly one of the global community’s major shakers and movers. The people we met there, without exception, were friendly, laid-back, and musically attuned. They cherished their history (both of pagan times, and the early Christian period), but not for any continuity with the present. They were heritage items, but they spoke in the past tense, and went mute. The eyes of the statues of ancient gods, sightless to begin with, had been endowed by history with cataracts and cobwebs. An empire that once lorded over others, now depended on those others for tourist dollars.

To be sure, the Greeks left a strong, continuing influence on Western ideas. We oversimplify when we believe that the Greek contribution was simply esthetics, or “beauty,” as we tend to translate “Yefes.” That preoccupation went beyond art and drama. It is not coincidental that the Greek gods were more refined, civil and creative than their Roman counterparts, who exuded, used, and misused aggressiveness and power. As Rabbi Jonathan Sacks wrote,[1]

It is impossible to overstate the significance of all this for the development of Western civilisation. We owe virtually all our abstract concepts to the Greeks. The Hebrew Bible knows nothing of such ideas. There is a creation narrative — in fact, more than one — but there is no theoretical discussion of what the basic elements of the universe are. There is an enthralling story about the birth of monarchy in Israel, but no discussion, such as is to be found in Plato and Aristotle, about the relative merits of monarchy as opposed to aristocracy or democracy. When the Hebrew Bible wants to explain something, it does not articulate a theory. It tells a story.

And yet, and yet. Philosophy to the Greeks literally meant the love of knowledge. It was the highest pursuit. Who is doing abstract conceptual thinking today? Philosophy, a discipline more or less invented by the Greeks, attracts less attention today than gender studies. The value of logical thought itself is under attack by some in the CRT camp, because placing it on a pedestal invites inequality of outcomes. Where is it hailed? Who does it in spades? Where do people still parse text lovingly? Try the local beis medrash!

Zeus, Zeus. I am here. Where are you?

We encountered no anti-Semitism while we were there. Walking around fully identified as Jews did not make anyone take notice. But looks can be deceiving. The percentage of Greek Jews murdered during the Holocaust was somewhere between 83-87%, one of the highest in Europe. In Salonica, the port that was so Jewish that it ceased operating on Shabbos, 96% of Jews were murdered. Roundups of Jews generally met with no local protests, and were often followed by looting of Jewish property. The Mayor of Corfu applauded the deportations. “Our good friends the Germans have cleansed the island from the Jewish riffraff.”

There were exceptions – but, as in other places in Europe, they were indeed only exceptions. Archbishop Damaskinos, the head of the Church of Greece, was the only European church leader to protest the work of the Nazis. His statements strongly condemned the treatment of the Jewish population, and backed them up by issuing false.  All 275 of the Jews of Zakynthos were spared deportation when the local mayor and the Orthodox Christian prelate offered their own names when ordered to submit a list of their Jews.

Was there, perhaps, a change of heart after the Shoah? Certainly not in the immediate post-War period. The law notwithstanding, returning Jews were not able to reclaim looted property. Known collaborators went unprosecuted. For years, the Greek government refused to ask for the extradiction of top Nazi Alois Brunner, living openly in Syria. Jews who returned to Greece were caught between the ascendancy of the Greek Orthodox Church, and the clinging by many Greeks to the Nazi charge that Jews were communists.

Crete has something to say about all this. The Jewish community of Crete was some 2300 years old, one of the oldest Jewish communities in Europe. It came to an end when its 300 Jews were shipped off to Auschwitz on the tanker Tanais. Mistaken for a German warship, it was torpedoed by an Allied ship. At the beginning of the War, there were two shuls on the island, one in Chania, the other in Heraklion. The latter had been home, centuries before to R. Yosef Shlomo Delmedigo (a corruption of the Latin del medico; he was a physician), known to rabbinic history as the Yashar of Candia. The Heraklion shul was reduced to rubble by the Germans. Parts of Etz Hayim in Chania, survived, in a manner of speaking. With no Jews left, the building and mikvah were filled with garbage and sewage. A single Jew who returned made its restoration his mission, and the shul was rededicated in 1999, with international fanfare, including the presence of the Metropolitan of. Today, there are services in the shul on the Yomim Noraim, as well as meetings at times during the rest of the year, especially during the summer tourist season, although the havura that gathers includes many non-Jews committed to Crete’s history and former diversity, not to Judaism.

So the last quarter century demonstrates that old hatreds can die, right? Looks are deceiving. With all that changed, some things just don’t. When Etz Chaim was preparing to re-open, Ireneus, the above-mentioned Metropolitan of Chania, joined with the head of the local regional government to object to the shul being used for actual religious services. Reintroducing Jewish worship would cause riots and dissension. Besides, there was a 1938 law on the books (put there by a fascist dictator!) that a religious community required at least 50 people, and there were not 50 Jews to be found in Chania!

In other words, probe behind the photo-ops, and the story remains the same. There can be sympathy for dead Jews – but not live ones.

One more reason to be grateful to Hashem for returning us to our own State.