When “Bigot” is Projection 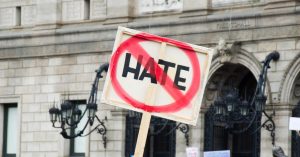 Last week, serial entrepreneur and Provocateur-in-Chief Elon Musk tweeted a meme suggesting that the left in this country has veered so far from center that those formerly considered centrists and even moderate leftists are perceived, today, as on the political right. The meme, which went viral, earning more than 1.5 million likes, is essentially the 21st-century version of the statement, “I didn’t leave the left. The left left me.”

That same left was, of course, outraged by Musk’s critique, with Washington Post journalists, NBC media critics, and many others arguing that it is actually the right that has been radicalized. But for all their efforts, incensed pundits and keyboard warriors could not counter the meme’s final, compelling proof: “Progressives” now condemn as “bigots” those who maintain a set of values shared not long ago by the overwhelming majority of Americans, and still shared even by many in the center.

As Jews, we can look back at history and find this sadly familiar. We have never conformed to the popular whim, and we don’t today. For example, this past Saturday’s Torah portion contained a passage that is a leading trigger for progressives: “With a man, you shall not lie in the manner that one lies with a woman, it is an abomination” [Lev. 18:22]. Needless to say, this wasn’t a political statement; Acharei Mos was read in every traditional synagogue immediately following the Passover holiday this year, as part of the annual cycle of Torah readings.

For observant Jews, these Five Books of Moses—Genesis through Deuteronomy—constitute the core of what we take to be Divine Law. And because this Law was given from G-d, and, thus, is perfect, we have no standing to second guess what is contained therein. One cannot claim to follow the Torah or Jewish Law, and omit even a single letter. We have survived according to this understanding, and because of this understanding, for millennia.

This dedication to revealed scripture is, further, not unique to Jews. There are literally billions of Christians and Muslims who, today, regard our same Holy Books as arbiters of moral conduct.

Yet according to progressives, it is discriminatory and repugnant to believe the aforementioned verse from Leviticus to be the Divine Writ. According to them, every traditional Jew, Christian, and Muslim is hateful or “homophobic.” Some call for the verse to be “re-interpreted,” while others demand we not “hide behind ancient texts” to justify our purported malice. Where they agree is that our millennia-old beliefs are not merely wrong, but immoral.

No, Jews and others who look to our Bible for guidance are not phobic, but faithful. The bigots are those who condemn us for our beliefs. It is important to state this clearly, to repudiate the gaslighting to which we are being subjected.

What is most notable about this is that only their particular target is new—the notion that “good” people are those who despise our beliefs and practices is ancient. The Bible itself records that Pharoah suspected Jews of disloyalty at a time when nationalism was of the highest value, and that, hundreds of years later, Haman (of the Book of Esther) advocated genocide because the Jews clung to their own beliefs and did not follow those of the King of Persia.

This continued throughout the centuries: temples and synagogues were destroyed and entire Jewish communities were massacred, always because parts of our religious values were deemed to conflict with whatever was au courant in that era. The Third Reich was no exception; Hitler loathed the idea of a conscience, and blamed Jews for “inflicting” such a concept upon Germans.

Thanks to the left, a new definition of hatred has popped up practically overnight. Progressives cannot identify a national leader who, thirty years ago, was not hateful and “transphobic” according to their new standards. Clinton, Obama, and Biden all once opposed gay marriage and other elements of the progressive agenda. Even Bernie Sanders didn’t publicly support gay marriage until 2009. Accusing everyone of hate is neither a tolerant nor a particularly civilized position—it is projection. If you are looking for haters everywhere, the best place to start is in the mirror.

It is important to note that, through 2,000 years of dispersion, Jews have never regarded it as appropriate to impose our beliefs upon any nation or people. This same principle was adopted by America’s founders as a foundational value and, moreover, enshrined in the First Amendment. True tolerance—to not be castigated as deviants, disloyal, malicious, or as phobic “bigots” simply for remaining true to one’s faith and practices—is woven into the fabric of the American ethos.

Sadly, as Musk pointed out, that simple tolerance currently seems too much to ask of those who have claimed the “progressive” mantle. Yet, that tolerance is the genuine, progressive value that, perhaps more than any other, has enabled Americans of diverse beliefs to develop the prosperous nation that has and continues to lead the free world. It is critical that we embrace it once again.