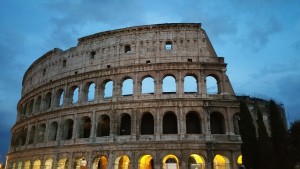 They told me that Rome would be Jewishly disappointing. Friends who had been there said that Florence was the Jewish destination. Rome’s charm was all in old churches, which hardly touch Jewish heartstrings. So I came preparing to be disappointed, not having any control over the itinerary. I am here with a tour sponsored by the Museum of the Bible (more on that later), as part of a minority Jewish contingent.

My friends were wrong, at least in my case. I have found Rome Jewishly fascinating, and will briefly explain why.

Our gifted and talented tour guide on Day One quickly demonstrated the different strata of history of what the locals call the Eternal City. The three most important are the ancient, the papal period (beginning with Emperor Constantine’s conversion of the realm to Christianity), and the modern, beginning with Italian unification.

The second stage was a Jewish horror at times, especially when a papal bull in the 16th century stripped Jews of rights and herded them into a poverty-stricken tiny ghetto on the Tiber River. Unification quickly led to the razing of the ghetto – but also to rampant assimilation, as happened in other areas of Europe. Neither of these periods was overwhelmingly interesting to me.

Much more interesting was the ancient layer, where several gemaros came to life. My hotel is a block away from where Julius Caesar lost his life in an ancient theater, of which there are many in Rome. (He should have been in the Roman Forum, but it was closed for refurbishing, and the senators moved temporarily to a nearby theater. I guess that contractors taking more time than they originally announce was a problem already in antiquity.) Nearby is a statue of Marcus Aurelius Antonius, thought by some to be the Antoninus who befriended Rabbenu HaKadosh and bankrolled the Mishnah project. (I suspect that I will be called to task for bringing up that identification and perhaps a reader will have something definitive to say.)

Marcus Aurelius was in good – or rather bad – company. The various emperors were pretty full of themselves, and left monuments to their triumphs or just to themselves liberally around the ancient city. Even more ubiquitous are ruins of temples to more gods than one can easily catalogue. The remnant of the shrine of the Three Vestal Virgins, guardians of the sacred flame that the Romans thought guaranteed the safety of their city, stands near the Roman Forum. The contrast with the very prosaic and utilitarian approach to fire (and its creation by Adam after the first Shabbos) stands in sharp contrast.

Most striking to me was the Capitoline hill, the seat of Imperial power. We find frequent references to Tanaim who had to travel to Rome to propitiate the Romans on behalf of the Jewish community in Eretz Yisrael. The magnificent steps leading up, the huge statues of protective gods, are overwhelming even today. The buildings that stood on top spoke in ancient times of incredible power, and would have dwarfed anyone coming from a simpler, agrarian country as surely as many visitors from poor countries feel when deposited in Manhattan. My stomach knotted thinking of the Tanaim who had to walk up those steps, holding the fate of their people in their hands. The experience would have crushed anyone who did not have firm emunah that Roman power was a chimera, and that eyn od milvado.

Yet, my recollection is that the gemara’s disdain for Rome did not focus primarily on the pridefulness of Rome, nor of the avodah zarah. To me, these would leave room for little else to complain about. But this is not the case. What jumped into my memory was the frequent references to the “batei teata’os ve-kirkasa’os” of the Romans. In other words, the officialdom of Rome was not always the chief threat to kedushas Yisrael. Roman pop culture was.

The theaters were many. I won’t get into the halachic discussion as to whether Chazal meant all non-Jewish drama, or the Greek classics with their drunken, murderous gods going against each other, or the more salacious plays. I will point out that in a few minutes in Rome it becomes clear what the “kirkasa’os” were. They weren’t Cirque du Soleil.

A Roman circus was an oval-shaped course, shaped like a modern horse track. It was here that the sometimes bloody and cruel spectacles took place, pitting men against tigers imported from Africa. Our guide explained that this was not the case in the Coliseum, despite the Church’s assumption that Christians were thrown to the lions there, resulting in it becoming a Christian holy site. (While martyrdom was not on the Coliseum playlist, many still lost their lives there, since gladiatorial combat was part of the regular fare.)

Becoming snack food for wild beasts did occur, however – and presumably Jews as well – at the circuses. The most famous, Circus Maximus, was directly in front of the Emperor’s magnificent palace, so that he could step out on his balcony and watch the gore.

Taking it all in, I relived, and appreciated more, several passages in Shas, including ones about avodah zarah icons installed in various places. References (as in the beginning of Avodah Zarah) to the “markets” established by the Romans also came alive, as we were shown the remnants of large areas designated as vegetable and meat markets in Roman times. Not a disappointing tour at all.

I am here at the behest of the Museum of the Bible, a 1 billion dollar project to open in DC in about 18 months. Conceived of and driven by evangelical Christians (of the decidedly pro-Israel variety), it will try to impress visitors with the long-time and lasting positive effects that the Bible brought to Christians, Jews, and the world. The folks behind it are smart enough to realize that they cannot proselytize the American public, but they can hope to rekindle interest in the centrality of the Bible to large parts of humanity. They hope, thereby, to offset some of the corrosive effects of a prevailing contemporary culture that dismisses the Bible as an important contributor to our values and morality. (Think of the Supreme Court in Obergefell, essentially dismissing the Bible not only as a dispositive source, but as any source at all. And think of the Rambam – no great admirer of Christianity, to be sure – who nonetheless noted with approval that, unlike Muslims, Christians believed in the sanctity of our kisvei kodesh.) A number of frum Jews are involved in advisory roles, including Dr Larry Schiffman, now a dean at YU, and one of America’s preeminent authorities on the Dead Sea Scrolls.

You’ll be hearing lots more about this venture in the future.

Meanwhile, I hope to find the time to report on other days of the tour.