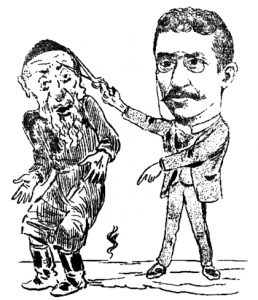 Number one on my list of brilliant people’s brilliantly wrongheaded ideas is something that the late British polymath/physician/comedian Jonathan Miller once said:

“I feel that the Jew must constantly re-adventure and re-venture himself into assimilation… I just think it’s the nobler thing to do, unless in fact you happen to be a believer in Orthodoxy, in which case there are self-evident reasons to keep [apart]. But if it’s done for the sole purpose of making sure that in the future you’ll be able to say the prayers for the dead when the holocaust is finally inflicted again, then I think it is a damnable device.”

Coming of age shortly after the European Jewish Holocaust, Dr. Miller might have ruminated a bit on the fact that the horror was unleashed from the country with the most assimilated Jewish population on earth at the time. That most German Jews were indistinguishable from their Christian fellow-citizens didn’t prevent the Nazis from going generations back to find Jewish ancestries. In fact, in the eyes of great Jewish thinkers, just the opposite is true: when we seek to assimilate, we will be rudely reminded that we are, and must always be, different.

When Yaakov meets his brother Esav, the latter kisses him on his neck. Whether that kiss was originally intended as a vicious bite, as one Midrash has it, or represented a momentary interruption of hatred by a sincere pang of kinship, as Rashi cites, Esav remains the progenitor of those who harbor animus for Yaakov’s progeny, the Jews.

And Yaakov, invited by his brother to accompany him forward, politely declines, making excuses for why the two must go their own ways.

That self-isolation of Jews reflects what the Torah later, through the mouth of Bil’am, states, that the Jews are destined to be an am livadad yishkon, “A nation that will dwell in solitude” (Bamidbar 23:9).

Jews are to respect and interact in good will with all peoples, but are also intended to remain, in a fundamental way, separate. We are not to absorb societal ideals that are antithetical to the Torah’s; we are to marry only other Jews; we are to maintain our Jewish observances, even if they may set us apart from others. We are not to assimilate – to dissolve into larger society.

My most recent Ami Magazine column, “School Board Scuffles,” can be read here.