Ben and Jerry’s: Not Your Plain-Vanilla Crisis 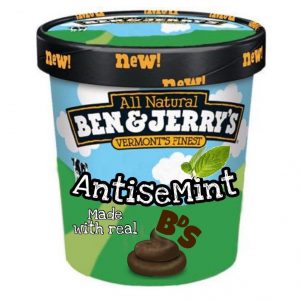 Impulse shopping for ice cream, as our scales will testify, is hardly uncommon. Maybe in this instance it was not so common, because I don’t really eat ice cream. Yet I found myself drawn to the ice cream freezer while doing the weekly shopping at the supermarket, feeling that I just had to buy some Israeli made Ben and Jerry’s (B&J), to support the local licensee who has stood up to pressure from the parent company for years.

Slim pickens. The freezer case looked like it had been held up at gunpoint. Just a few plain flavors were strewn helter-skelter at the bottom, like the bodies left in the street after John Wayne emptied the last chamber of his six-gun.

It was obvious that many other Israelis were following the same impulse. I found this to be richly satisfying, even though I had to walk away with a pint of very ordinary coffee. Could be that my grandkids won’t know the difference. I had done my share of sticking it to those who were trying to stick it to me.

Actually, I still have a good deal of sticking to do, which is why I’m contravening my own strongly stated position of what should and should not be published on Cross-Currents. I’ve long opposed (but don’t exercise any veto power) purely political writing. Only essays that take a yeshiva or seminary education to produce belong – at least in my opinion.

Every rule has an exception, and this is a time for an exception to be made. The anti-Semitic boycott of Israel by B&J is far more serious than most believe. Here is why:

This is not just about resisting economic warfare against the Jewish State. Or about responding to a terrible snub against the Jewish people. Or about standing up to the unholy alliance of left-leaning non-Jews, ex-Jews, and un-Jews[1] that spawned this monstrosity. Or about jeopardizing Jewish lives by encouraging anti-Semitism in the midst of a global pandemic of Jew-hatred. Or about the clear and evident anti-Semitism involved in doubling down on the Jewish State, overlooking and sparing the perpetrators of humanitarian disasters many times larger – including the cultural genocide of Tibetans through the Chinese occupation, the use of child soldiers in Africa, the expulsion of Christians from Iraq, the suppression of religious freedom in Iran and Pakistan, the herding of the Uyghurs into concentration camps, and many others.

It is all of the above – and more.

BDS is an irritant, a mostly failed attempt to harm Israel economically which has not put a dent in the growth, B”H, of the Israeli economy. The B&J/Unilever gambit is more dangerous. It takes a large, well-liked company with name recognition in practically every US family, and associates that good name with a finding that Israel is a huge human rights violator – perhaps the worst in the world. Making that horrific label stick, possibly in the minds of tens of millions of Americans, can indeed wreak havoc with Israel’s standing in the world community. If it goes unchallenged, it makes it that much easier to heap all the other epithets on Israel: apartheid, brutal, inhumane, Nazi-like. It would make it so much easier for the next business to do the same. And the next. And the one after. It will make it easier for school curricula (beyond the college campuses, which have been lost for years) to lump Israel together with the truly brutal regimes of the world. It can put every Jew on the defensive for being on the wrong side of history. The fact that a true corporate giant – Unilever – would not cry foul at this misstep will greatly solidify the impression that Zionists/Israelis/Jews are evil and expendable.

Moreover, we should understand that pressure from BDS was not what got B&J to make this move. The statement put out by the Independent Board of B&J makes it clear that the board members were not simply giving in to pressure, but were individually enthusiastic about getting back at the pariah State of Israel. We are not looking at a successful lobbying campaign by BDS, but the conversion of a generation of young corporate executives to the tenets of extreme wokeism. This conversion has been going on for decades, and the success of progressive indoctrination is just starting to become visible in the corporate world. It’s a replay of the enthusiasm of young people after the 1917 Revolution to completely remake Russia. We know how that ended.

What should we do? Some suggestions:

Bottom line: don’t just have a melt-down. Instead, go out there and do something!