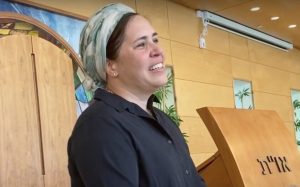 The headline caught a huge amount of attention: In Israeli first, woman chosen as sole spiritual leader of Orthodox community.

The article, and countless other versions of the same, reports that Rabbanit Shira Marili Mirvis, who was trained at Ohr Torah Stone’s Susi Bradfield Women’s Institute of Halakhic Leadership (hereafter “OTS-WIHL”), will assume the position of spiritual and halachic leadership of Shirat Tamar, a synagogue in the Efrat neighborhood.

What is absent from the article’s description of Rabbanit Mirvis’ training, certification and position is the word “rabbi”, as Ohr Torah Stone (hereafter referred to as “OTS”) clearly seeks to avoid the rabbinic appellation:

‘The chance to witness Rabbanit Shira Mirvis take on this role represents an important moment as we recognize that the place of women in Jewish leadership can go fully hand in hand with halacha and our mesorah (tradition),’ said Rabbi Kenneth Brander, president and dean of Ohr Torah Stone. ‘I am deeply hopeful and confident that we will look back on this moment as one which paved a new halakhic direction for the rightful place of women spiritual leaders within the Orthodox community.’

This studious avoidance of referring to Rabbanit Mirvis in a rabbinic capacity manifests an eschewing of overtly violating Orthodoxy’s proscription on training or ordaining women as rabbis, reflective of the halachic position of the RCA, Agudah, OU, Igud, TORA, and various individual top-tier halachic authorities (e.g. here and here). (A presentation of these rulings is beyond the scope of this article, and readers are advised to read the rulings themselves.) Please also see this Statement on Orthodoxy from Coalition for Jewish Values.

However, evasion of rabbinic verbiage gets rather sticky under examination. For example, the RCA bans the “ordain(ing of) women into the Orthodox rabbinate, regardless of the title used”; the OU ruling prohibits “the appointment of women to perform clergy functions on a regular ongoing basis – even when not accompanied by a rabbinic-type title.” A handful of American congregations at the edge of the Orthodox orbit have attempted to circumvent the prohibition on female clergy by hiring graduates of Yeshivat Maharat and assigning them rabbinic functions while cleverly bestowing up them novel titles such as “Director of Spiritual Engagement”, and it appears that OTS has embarked upon a similar path, as it provides women with rabbinic training and helps procure rabbinic-type positions for them, but makes sure to leave out the “rabbinic” wording.

Case in point – from a just-published interview with Rabbanit Shira Marili Mirvis:

When Shirat Hatamar was established, we adopted Rabbi Shlomo Riskin as our official Halachic adviser and community mentor. Rabbi Riskin is the founder of the Or Torah Stone Institutions, which includes the Lindenbaum Women’s Talmud & Halakha program where I studied these past five years. Rabbi Riskin has done tremendous work in advancing women’s Torah study and leadership, turning the Lindenbaum program into the women’s equivalent of what men study here in Israel for rabbinic ordination from Israel’s Chief Rabbinate.

Knowing that I was functioning as my synagogue’s halachic authority for the past few years, Rabbi Riskin approached the community a few months ago and said it’s time to make it official, so the process began. [Last] week they felt ready to take a vote, and the results were that 83 percent of the community voted in favor of appointing me as the rabbinic leader of the community.

My duties in the synagogue are to serve as the sole Halachic authority for our community, teach Torah and rule in Halachic matters, which [were] always the traditional [duties] of a rabbi in halachic Orthodox communities. I will also counsel families and individuals, deliver sermons and teach Torah classes for our community. There are no other rabbis serving in our synagogue; I will be the sole “rabbinic voice” and “spiritual leader” in all religious matters.

The conspicuous rabbinic overtones of Rabbanit Shira Marili Mirvis’ training and position were not imagined or invented by her. OTS-WIHL publicly states about its training program:

Over an intensive period of five years the following subjects are covered:

WIHL fellows are also provided with Pastoral and Leadership training… Graduates of the five-year WIHL program are certified as spiritual leaders and Morot Hora’ah [authorized to provide direction in matters of halakha-Jewish Law].

The OTS-WIHL website further states that women in the program take “the same tests that men take with the rabbanut (rabbinate).” And the Hebrew version of the program describes the conferral of its “Heter Hora’ah” (authority to rule on halachic matters) as “the authorization that has been in practice for countless generations to lead and issue rulings in Halacha”. This is a glaring reference to semicha, rabbinic ordination. It obviously cannot refer to anything else, yet the words ”semicha”, “rabbinic” or “ordination” are mysteriously omitted.

If OTS-WIHL is not a women’s rabbinic training program, I don’t know what is. It is unmistakable. The author of Why it’s easier to ordain Orthodox women in Israel than the US affirms this, as does OTS leadership itself by implication, as quoted in this article.

This is far from a new phenomenon. During the 2017 OTS-WIHL conferral ceremony, the OTS-WIHL Rosh Bet Midrash publicly stated about the occasion, in the presence of Rabbi Riskin (who did not protest these words):

Moreover, in the aforementioned JTA article (also from 2017), Rabbi Riskin told the reporter that OTS-WIHL graduates “teach and direct Jewish law, just like a rabbi.”

What does this mean on a larger scale? Put more pointedly, why does it matter? My shul is not about to hire an OTS-WIHL Morah Hora’ah, nor are most shuls; so what is the big deal?

Although a few borderline Orthodox congregations in the US have “snuck in” full-blown female clergy under the guise of concocted non-rabbinic titles (and this will surely continue, freshly inspired by the OTS-WIHL example), OTS-WIHL is setting a precedent and creating a new norm. OTS’ leading rabbis are household names who have been associated more or less with the mainstream and are viewed by much of Modern Orthodoxy as on the same page with it, and they have now created a mechanism to introduce a broad cadre of female clergy members into Israeli society under the Orthodox mantle – thereby normalizing and mainstreaming the notion of Orthodox female clergy on a comprehensive and far-reaching scale. The sentiment that “women are rabbis just like men” has been sown and cultivated, and seismic reform of much of the Israeli (followed by the global) Modern Orthodox landscape is on the way.

It is quite telling that Rabbi Riskin (OTS Founder, Chancellor Emeritus and Rosh HaYeshiva), Rabbanit Devorah Evron (OTS-WIHL Director) and Rabbi Shmuel Klitsner (OTS-WIHL Chairman) all sit on the Yeshivat Maharat Advisory Board; as is known, Yeshivat Maharat unreservedly grants semicha/rabbinic titles to women. Let us not pretend that much of OTS-WIHL’s senior leadership does not support the ordination of female rabbis.

The situation is quite unfortunate as it is disappointing, for the current state of affairs and clear trajectory have been in the works for quite some time, with very few people raising concerns. Now that much of the Modern Orthodox landscape stands to undergo substantive transformation as succeeding classes of OTS-WIHL graduates are sent out to serve in rabbinic capacities far and wide, will this trend be seriously challenged before it is too late?