Saints, Real and Imagined: The Vatican of the Holocaust, and the Rev. Dr. William Harter 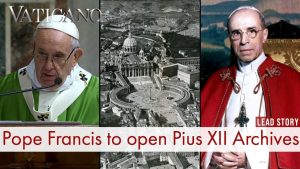 A young man was mindful of the advice he received about jump-starting conversation with a date. He had already struck out with the first two suggestions: asking about family, or about food. (No, she said, she didn’t have a brother. And she also didn’t like potatoes.) Remembering the third suggestion – philosophy – he turned to her with a flourish. “If you had a brother, would he like potatoes?”

That is where we Jews are in regard to saints. It’s all theoretical. We don’t have them in Judaism. We don’t venerate the dead. Not them, and not their relics.[1] The closest we get is the idea of the tzadik/the righteous one. That honorific is conferred by popular acclaim, and creates no legal status or privilege. We don’t submit names for consideration to panels that investigate. The performance of miracles is irrelevant.[2]

If and when we comment about proposals in other parts of the planet to create new saints, we do so like the hapless young man. If we had them, this is what they would look like. Two events in recent days call for that kind of response.

A new article by David Kertzer in The Atlantic will make it easier for Jews to take a very dim view of the attempt to confer sainthood on Pius XII, the Pope of the Holocaust. Jews and Catholics have been going at each other for decades about whether the Pope was a saint or sinner in regard to the Shoah. No new review of the background is needed here. Briefly, he never stood up to attack the Nazis for the extermination machine about which he knew. He did protect some Jews, and allowed/encouraged his vast network of church institutions to protect others. Was it cowardice that generated his silence? Indifference? Dislike of Jews? Or was it prudence that dictated that he remain mute while six million were murdered, so that he could save whomever he could without bringing the wrath of the Nazis down upon the Vatican? Would that even make a difference? While such a judgment might be defensible in an ordinary person, is it morally acceptable in a world leader of hundreds of millions of faithful? Is it the way a saint should act?

Kertzer’s new revelations come from the long-awaited opening of the Vatican archives on the war years. We read the Pope’s private discussions about the deportation of the Jews of Rome in 1943. More importantly, they show the background of institutionalized hatred of Jews, mendacity and treachery in the Vatican during that period. The account is spellbinding, and should be read in its entirety. I’ll weaken, and provide a few spoilers:

When a thousand Roman Jews – the pope’s Jews, as they were known – were rounded up and held in a building right next door to the Vatican and then sent to Auschwitz, the Vatican did nothing. As deportations from Italy continued, a Father Pietro Tacchi Venturi urged a response, although a rather tepid one at that. It was to be a private memo to the Germans. (There were relatively few Jews in Italy, he argued. Many were intermarried to Catholics, who would be upset. There was nothing to gain, since Mussolini’s racial law “is sufficient to contain the tiny Jewish minority within its proper limits.”)

Even this was opposed by the Secretariat of State’s expert on all Jewish questions, a certain Monsignor Angelo Dell’Acqua. “The persecution of the Jews that the Holy See justly deplores is one thing,” Dell’Acqua advised the pope, “especially when it is carried out with certain methods, and quite another thing is to be wary of the Jews’ influence: this can be quite opportune…There was no lack in the history of Rome of measures adopted by the Pontiffs to limit the influence of the Jews.”

In the aftermath of the war, efforts were made to reunite Jewish children who had been entrusted to Catholic institutions and individuals. (According to one estimate, there were 1200 in France alone, and many more in Poland and elsewhere.) The story of the failed attempt by the then-chief rabbi of Palestine, Rav Yitzchok Herzog to enlist the aid of the same Pope Pius XII is well known. Not known until the archives were opened is what happened next. The issue was referred to Dell’Acqua, who advised against any Vatican assistance in locating and repatriating the orphans.

Things hardly ended there. France in the early ‘50’s watched as Church figures were marched off to jail in a high-profile kidnapping case, concerning two Jewish boys, Robert and Gerald Finaly, who were entrusted to a Catholic friend by their parents, and who were later murdered in Auschwitz. The case fired up anti-Catholic sentiment in France and abroad, and embarrassed the Church. That did not prevent many of its loyalists from spiriting the boys away and hiding them after courts had ordered them returned to Jewish family. (Towards the beginning of the ordeal, a family member accosted the woman who orchestrated their care during the war years. “‘The Jews are not grateful.’ She would never give the boys back, she said.”)

Behind this drama was the same Church policy that played out in the 19th century Edgardo Mortara affair (and that still remains in effect), namely, that the boys had been baptized – without anyone’s consent – by a Catholic woman. Although baptisms without consent are not approved of by canon law, once done they are valid. The children could not be allowed to be returned to the Jews after they had become proper Catholics. And so they were moved from place to place and hidden from the authorities. All with the knowledge and consent of the Pope himself, as we now know, acting on advice from the Holy Office – which is another name for a Church agency begun in the 16th century. It had a long name, but we know it best through one of the words in that name: Inquisition. The Holy Office told the pope that “the Jews, tied in with the Masons and the socialists, have organized an international press campaign” against the Church. (I suppose that is what passed for intersectionality back then.)

Enter, once again, Dell’Acqua. As negotiations continued between Jewish groups, the French government, and the Vatican, the Church found itself on the ropes. The Vatican could consent to “find” the boys, but only if assured that they would continue living as Catholics. Dell’Acqua complained, “the court proceedings in course will finish in favor of the Judaic thesis and the two young boys will end up in the hands of the Jews who, with ever greater ruthless obstinacy, will force a ‘Jewish’ education on them, with the resulting humiliation (at least in the eyes of a part of the wider public) of the Catholic Church.”

At one point, a Reform rabbi deputized by the Finaly family met with Dell’Acqua, who told him that the boys were now Catholic, and “the Catholic Church not only has rights with respect to them, but duties that it must fulfill.” As he got up to leave, the rabbi countered that the Jewish community also had rights and responsibilities. “Not, however,” Dell’Acqua told him, “of the same kind as those of the Catholic Church.”

As it became clear that the boys would likely find their way to Israel with their relatives, Dell’Acqua grew bitter. “I wonder if it is not the case,” Dell’Acqua proposed, “to have an article prepared for La Civiltà Cattolica to unmask the Jews and accuse them of disloyalty.” In the end, Pius himself arranged through the Holy Office for an article to appear in a Catholic publication, claiming righteous behavior, and decrying the infamy of the other parties. “Even the chief rabbis lent themselves to these harmful suspicions with words that, apart from every other consideration, betrayed the most absolute lack of recognition for all that the Catholics had done in these years for the Jews, running the risk of the most serious personal dangers and without asking for anything, simply out of Christian charity.”

Those who would viscerally react to the piece with, “I told you so! Those Christians are all the same” would be making a great mistake. If anything, the turnaround by Pius’ successors can be appreciated as all the more significant and dramatic. Pope John XXIII’s Vatican II and the Nostra Aetate document it spawned were hugely effective in marginalizing the old-guard anti-Semitic traditionalists, and creating new, positive attitudes towards Jews and Judaism. Pope John Paul II – the closest we will get to a Jewish pope – repeatedly demonstrated with dramatic actions his commitment to a genuine respect for the Church’s “older brother.”

Pius was awful; Dell’Acqua was worse. There were Catholic saints and sinners during the Holocaust. Pius’ successors were remarkably good about repairing what needed to be repaired. There are certainly both saints and sinners in the Catholic Church today. It is not naïve, however, to think that the proportions have shifted towards the good side.

If the material above will create a vacancy in the sainthood department, I have just the person who could fill it more appropriately. He has no chance at it, unfortunately. Presbyterians don’t qualify. The Rev. Dr. William Harter, however, was the kind of human being that no one could think of anything negative to say about him if their entrance to Heaven depended on it.

I first met Bill when his denomination, Presbyterian Church-USA (PCUSA), was poised to become the first mainline Protestant denomination to divest funds from Israel at their General Assembly. Bill was the unofficial leader of a remarkable group of people in that church who were appalled by the anti-Israel leanings of their religious body, and who worked tirelessly for many years to fight it from within. Several within this group literally worked hours each day, every day, on activities in support of Israel and Jews. I value many of them as treasured friends to this day, even as their church has dwindled to a fraction of its previous self in both numbers and importance. (Most of them have left the PCUSA for other denominations.) Unlike my evangelical friends whose motivation draws directly from Scripture, those in this group were animated primarily by justice issues. They understood what Israel was about, and how she was treated unfairly. That was wrong, and they were going to do something about it. When you got to know people in this group, you could never, ever believe that all pro-Israel Christians were motivated by a desire to convert us – or even worse. These are good people.

Bill’s involvement with these issues predates that General Assembly by decades. He was one of the leaders of the National Christian Leadership Conference for Israel, an umbrella group of Israel-friendly Christians. He did this while pastoring different congregations, one of them together with his wife, until the time of her death. (His faith in G-d at the time of her illness and death could put many people to shame.) He was a worker, a doer, who showed no signs of ego or pride. He plugged away, and led by example. Forever cheerful and upbeat, you could not despair in his company. (I participated by phone in a weekly call to discuss the latest news and strategies regarding Israel. Each week, for years. I tired of it before they did.)

Above all, he was a super-mensch, which should be the most important criterion in sainthood candidacy. He was kind, considerate, and forever caring.

So much of what is wrong with America today stems from idolizing the wrong figures. People need heroes; life is cheapened when they are found within the ranks of mindless celebrities and corrupt politicians. There are real heroes and role models to be found in individuals like Bill Harter.

Bill passed away a few days ago. He will be sorely missed.