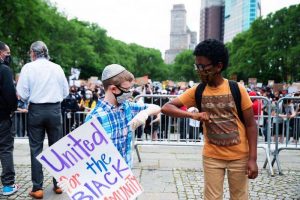 If there were a contest for the most tasteless use of a slogan this summer, it would be hard to pick one out of several recent candidates reacting to New York Governor Andrew Cuomo’s disallowal of overnight camps in the state this year.

Two of the slogans are featured on signs being held by chassidic children in a photo that appeared online and in at least one respectable Jewish print publication. One sign reads “Kids’ Live Matter” [sic] and the other, “No camps, no justice.”

The third was part of a caricature in a Jewish magazine intended for young people.  It portrayed Mr. Cuomo dressed as a police officer with his knee holding down a child wearing a summer camp t-shirt and crying out “I can’t breathe.”

What were the creative minds who thought those lines clever thinking? Did they not realize that equating the cruel snuffing out of lives with depriving children of a summer camp experience is obscene?

Please don’t misunderstand. Overnight camps are a very important part of many Jewish children’s lives and educations.  Such camps provide some 41,000 young Jews with opportunities to grow physically, emotionally and religiously.  Camps are particularly needed this summer, after months of children attending classes remotely and being denied the camaraderie and human interaction so vital for human development.

I fully realize that.  And also that Mr. Cuomo’s edict was woefully wrongheaded.

He ignored a 17-page safety plan provided to him by a consortium of Orthodox Jewish overnight camps, signed by no less than nine nationally-recognized infectious disease doctors and medical professionals. It explained how precautions could be taken at overnight camps to minimize, if not eliminate, the risk of Covid-19 infections.  The experts contended that children in camp environments would actually be safer in the protective bubble of isolated camps than they will now be if the edict stands.

But the cogent case for overnight camps doesn’t deserve to be sullied by outrageous, offensive comparisons.

Did the sloganeers consider for a moment how a black citizen, anguished by the seemingly endless parade of killings of unarmed black men and women by police, would perceive the “borrowing” of chants used to protest such carnage in the cause of demanding that… summer camps be opened?

Leave aside how a black American would feel.  How should any thoughtful person feel?

And if it’s really necessary to bring the issue closer to home, how would any of us Jews feel if “Never Again!” was co-opted to describe some summer vacation resort’s pledge to not ever repeat the same entertainment experience? No need to even imagine. Just recall the howls of Jewish outrage last summer when Representative Alexandria Ocasio-Cortez referred (not even inaccurately) to detention facilities on the southern border as “concentration camps.”

More disturbing than the tone deafness of the offensive borrowings is the lack of empathy it reveals.

The Torah teaches us to treat our fellow Jews in special ways.  We are family, after all, and family comes first.

But is the concept of tzelem Elokim limited to Jews?  Does the word brios in mechabed es habrios (Avos, 4:1) not, on its face, mean all people?  Did Dovid HaMelech not mean to include all human beings when he sang (Tehillim, 65:3) “You, Who hears prayer, to You all flesh will come”? Were korbanos not accepted from non-Jews in the Beis HaMikdash?

Is “darkei shalom,” for some reason, a lesser halachic ideal than others? Is not the goal of history, as our nevi’im prophesied, to bring all the earth’s inhabitants to recognize Hashem? Do we not then have to be concerned about them?

Back in 1964, Dr. Marvin Schick, a”h, writing in The Jewish Observer, asserted:

“It is our historical and religious heritage that compels us to sympathize with the plight of the Negro. It is unthinkable that a people so oppressed throughout history would not today rally to support the cause of the American Negro, now afflicted by the irrational forces of hatred and bigotry. Anything short of this by American Orthodox Jewry is to reject the principles that we have stood by through the millennia of persecution and to which we must remain equally faithful in a free society.”

Yes, there has been hatred for Jews among some blacks. I can testify to that from personal experience. Many experiences, in fact.

But I have also had enough interactions with black citizens of good will to know that the haters aren’t the norm. And all of us have witnessed more than enough in current events to know that being black in America remains a difficult, even dangerous, thing.

“Black Lives Matter” is a name that has been adopted by scores of organizations, some larger, most smaller. But Black Lives Matter is also an idea — essentially a reiteration of what was once known as the “civil rights movement.”  That movement qua movement, as Dr. Schick wrote more than 50 years ago, is one that should resonate with us.

The concept of darkei shalom, if nothing else, should compel us to show black Americans, and all people, that Jews committed to living Torah-faithful lives are fully committed to the safety and equal treatment by society of all human beings, no matter the color of their skins.