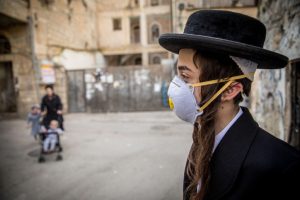 The Judean hills were alive with the sound of music this past Shabbos. The Von Trapps provided no assistance. Yerushalayim residents, chafing like everyone else from quarantine, had been told just before that restrictions were beginning to be ever so-slightly-relaxed. Shuls remained closed, of course. But it became possible for people to daven on the streets, in parking lots, and in courtyards. So more and more outdoor minyanim began to spring up in the days before Shabbos. (The morning after I joined one at my familiar shul, I knew things were heading back to more familiar territory: the meshulachim were back.)

By leyl Shabbos, there were lots of people davening in different locations, all of them outdoors. The result was literally music to the ears, as Shabbos – always palpable here – became audible as well.

Beautiful, right? Well – yes and no.

Taking in all that Shabbos ruach was exhilarating, to be sure. But some people were taking in more than they expected. Compliance with the Health Ministry mandatory guidelines was less than stellar. (This is in a mixed neighborhood, where there are more of both Dati Leumi folks and seculars than charedim.) I was startled by how many people I passed in the street were not wearing masks at all. Among those who did were people who tried to have the best of both worlds, and covered their mouths, but not their noses. (Let us hope that they don’t get the worst of both worlds…)

My brief forays out into the neighborhood assembled ample evidence of the wisdom of moreinu Rav Asher Weiss. Just days earlier, he took to YouTube to urge the charedi community not to reopen yeshivos, even according to the plan worked out with the Health Ministry. It’s just not practical. You can’t expect teenagers, who don’t feel the same threat, to be able to abide by the draconian measures of their proposed confinement in their yeshivos. We did not have the right according to halacha, he argued, to take a chance with people’s lives. From what I’ve seen, we can’t expect compliance from adults either. Too many, having dutifully obeyed for close to two months, have pretty much reached the limit of their patience, or their conviction that they were contributing to the Greater Good.

The fevered pitch of anti-charedi sentiment here seems to have died down. Some of the press pieces condemning the entire charedi population were met with more balanced analysis, both here and in the US. Similarly, an Israeli team did a good, balanced job presenting the impact of covid on the charedi community of NY. (It is probably no coincidence that this starred one of the participants in the Tikvah summer program for bnei Torah that I was privileged to lead for a few years.)Those rightfully pointed to a number of factors that removed much of the blame from the community. Purim, after all, spread the disease before anyone in Israel or the US had implemented any changes in life-style at all. High-density living may have made any effort at containment irrelevant.

Writers – including a few outside the Orthodox community – were even able to point to the double standard that was used against charedim.. The high infection rate of some other minority communities was attributed to racism (i.e. white privilege assuring the unequal sharing of job and education resources with urban minority poor), and the affected populations were treated with sympathy. That sympathy stopped in some cases at the border of Jewish neighborhoods. There, the affected of which were treated as pariahs and perpetrators, rather than victims.

Writing in Haaretz, Avi Shafran targeted the secular readership with what might be called a comprehensive position paper. In Mishpacha, Jonathan Rosenblum turned inward, to questions coming from closer to home. He responded to a US charedi who spoke of the self-doubt in the community as it contemplated its severe tragic losses, and its elevated rate of infection. “Let’s not beat ourselves up,” urged Rabbi Rosenblum, and convincingly demonstrated how so much of the damage could not possibly have been anticipated or prevented. Both of these pieces were, I thought, particularly effective.

It is good to cut through the illegitimate criticism, and show that “the self-doubts and recriminations are excessive.”. But it is not so good to allow the moment to pass without taking note of the multiple, systemic weaknesses and failures that killed people, are still killing people, and, bederech hateva, will continue to kill people.

It’s not quite true that once the word got out, everyone did what they were supposed to. That is certainly true of the overwhelming majority, but those who didn’t constituted a miyut ha-matzui, a very significant minority. Rabbi Rosenblum’s prediction that, while we were not so quick to respond properly, “we will surely do so in the future” has already shown itself to overly optimistic. Charedim ignoring the protocols were on full display on Lag B’Omer in Meron, Meah Shearim, Stamford Hill, and Brooklyn.

Rabbi Meyer Twersky’s recent incisive piece pointed to the irony of the levaya that ultimately was the cause for De Blasio’s lashing out at the Jewish community. “An inestimable indignity was perpetrated, however unintentionally, when – for the nominal honor of the deceased – people were exposed to danger and, additionally, a chilul Hashem ensued.” None of this occurred because of poor communication and learning late about the dangers of covid-19. In fact, the shul that organized the levaya hosted a large event the very next week – and once again subjected all other Jews to mounting anti-Semitism.

Why was the response in Bnei Brak both a flip-flop, and late in coming? Are we going to question the manipulation of leadership by askanim and grandchildren, as a prominent Bnei Brak rosh yeshiva did? To be sure, if we don’t, a sizeable number of people will ask the questions – and come up with answers far more dangerous than if we probe respectfully, rather than ignore the issue.

Where were we when Kupat Ha’ir guaranteed – yes, guaranteed – that anyone who donated 3000NIS would be spared from infection (and rewarded with a silver amulet, to boot)? Did we recognize this as directly imperiling the lives of thousands of people, who could then go about their usual routine, without taking any precautions? In a subsequent interview, a ranking member of the court argued that anyone who would not take advantage of such a guarantee could only be something between a maskil and an apikorus. Did we protest the bizayon ha-Torah in such a position, that makes Torah Jews look like simpletons, rather than discerning and wise?

Why does that sizeable minority of scofflaws continue to exist? Is there something we can learn by observing where the trouble comes from, and where it continues? Does pointing to the misbehavior of spoiled hipsters on Tel Aviv beaches make us feel better? Should we find succor in comparing ourselves with the worst of what the surrounding society has to offer, rather than hold ourselves to the highest standards? When Achan sinned by taking a simple item from the spoils of war, Hashem faulted all the Jewish people. Rav Dessler explains that if the rest of the people had been entirely resolute in listening to Hashem’s command, it would have been impossible for even an individual to act differently. The power of the community is strong. What does the existence of our sizeable minority of people indifferent to the life and death of others, as well as chilul Hashem, say about the latitude that the rest of us have created for them? Was it appropriate for Mishpacha to do a laudatory piece on Kiryas Joel, and the guidelines that were ultimately set down by leadership, without mentioning that it took a call from the White House to make that happen? Do we not believe that this itself was a major chilul Hashem? Should we not try to assess the impact of the minority on the well-being of the majority? Can we try to learn in the coming months how many Jews were left unattended by health-care workers who viscerally reacted to the visuals they watched day after day of very Jewish-looking Jews flouting the law? Will it matter to us?

One of the exculpatory factors that the press belatedly discovered after the first round of charedi-bashing was the isolation of the charedi community. It should be expected, people then argued, that what government officials demanded would be met with suspicion, especially by people who did not listen to radio, television, internet news, or use social media. Let’s grant that. Do we end the discussion there? Or, in trying to understand what went wrong, do we probe further? What are the effects of isolation on a community? Does it create or sustain a bastion mentality, in which everything from the outside is treif and an existential threat? Does it create an artificial self-importance of its own, in which everything and everyone else deserves derision, and encourage trying to get around the law whenever possible? Does it create a contempt for authority in general, other than Torah authority as conveyed by a particular local leader? Does the lack of secular education play a role in failing to recognize new realities (some bad, some good) in the people in the surrounding culture? If it does, and the effects are harmful and affect the rest of us as well, should we continue to prop up their attempts to keep minimum secular education out of their schools? In Israel, charedim earned a well-deserved Hiroo Onoda statuette for historical accuracy. This, for their successful campaign to depict the government as hell-bent on the destruction of religion as its chief raison d’etre. Did that knee-jerk rejection of any good coming from the government and the IDF contribute to the suffering and death of people?

Should we not be asking all these questions now, when we are motivated?

Some people are. Some in the charedi world are questioning whether their isolation is something they can live with, and are quietly seeking ways to inch a bit closer to the Israeli mainstream by looking into employment and academic opportunities.

It’s good if it works for them, i.e. if they get the proper support and guidance, so that their ruchniys is not harmed in the transition. It’s bad if they will encounter so much pushback from family and community, that they will decide that charedi life – with all its attendant spiritual blessings – is not for them.

MK Aryeh Deri recently observed that 70% of the covid-19 in Israel is in the charedi community. He said that he has access to stats that others don’t, and that is why his number is even more bleak than others that are bandied about. That sobering number, he said, calls for a cheshbon hanefesh/a taking stock. It is not clear whether he meant a spiritual accounting as to why charedim were so hard hit, or a more mundane analysis, of attempting to learn where the system failed. The ambiguity probably mean that a good number of readers will take it both ways.