Why Me? Because Me 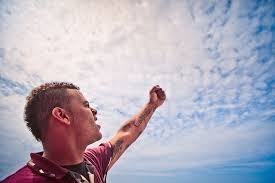 Amid the much physical, economic and psychological suffering being borne by so many during the current health crisis, some have, no doubt, thought — perhaps even given voice to — the age-old expression of protest of the cruel hand of fate: “Why me?”

There’s a Jewish answer to that question. It lies, I think, in an incident we encountered in last week’s Torah portion, in the story of the mekallel, the blasphemer.

In that account, a man — who, according to the mesorah, had been born to a Jewish woman and an Egyptian man during the subjugation of our ancestors in Egypt — wanted to join the tribe of his mother’s Jewish husband. Denied membership, he railed against G-d in an appalling way and, eventually, on orders from Above, was executed.

The narrative, though, begins with the words “A man left….”

It is a strange and superfluous phrase, for which the Midrash offers several explanations. The first one cited by Rashi is an enigma: “He left his world.”

A number of years ago, a young man took counsel of Rav Aharon Feldman, shlit”a, now the Rosh Yeshiva of Yeshivas Ner Israel in Baltimore. The seeker explained that, due to what he felt was an unchangeable psychological limitation, he would never be able to marry. But he was fully committed to Judaism, which makes marriage a high priority. What should he do?

Rabbi Feldman told him that if, indeed, he was certain that he was unmarriable, he should stop and recognize the unusual opportunity thereby afforded him.

As a single man, the rabbi explained, the young man would be able to live in communities where there are Jews but no Jewish educational and other facilities that an observant family would need. Rabbi Feldman recounted the true story of another man in similar circumstances who had inspired the Jews of such a city for more than forty years.

There are other important roles, Rabbi Feldman continued, for which an unmarried person is particularly well-suited — like fundraising for vital Jewish institutions, which requires much travel.

The young man, Rabbi Feldman explained, should regard the Jewish people qua people as his “wife and children.”

I don’t know what happened to the then-young man, but like to imagine that he became a unique force for good in Klal Yisrael. Whether or not that transpired, though, the advice he was given was gold.

Because each of us has his or her own “world” — a specific role to play in the larger world that includes all other people’s individual worlds. The blasphemer had a truly unique part to play in life — as the sole member of the Jewish people without a tribe. What special opportunity that gave him is unknown. But it surely existed. And, instead of embracing his reality, his world, along with all its inherent challenges but potential, too, he chose to rail against Hashem.

He “left his world” — abandoned his world, the unique world that was his destiny.

I have to wonder about the proximity of the mekallel account and the laws delineated earlier in that same Torah portion, about how cohanim with certain physical blemishes may not serve in the normative cohein role of processing sacrifices on behalf of supplicants. Might the nexus of those pesukim and the story of the mekallel be self-evident?

Whatever the reason for the various disqualifications of cohanim regarding sacrifice-service — and it is certainly nothing obvious — the disqualified cohein might easily be expected to be saddened by, if not curse at, his lot in life.

But his lot it is. “His world,” is simply not the world of Temple service. And if he is wise and embracing of that fact, he will find the special role he, as a cohein unbound from the Temple service, is intended to assume.

As small children, many of us want to be many things at once when we’re grown. But we eventually realize that we can only be either a fireman or a policeman or a ballerina or a scholar or a business tycoon or a writer or a professional baseball or football player – not all of our dreams together. We come to realize, too, that if we, say, lack the requisite physical strength and coordination, baseball and football (and ballerina and fireman) are out, and we must make other choices about what will be “our world.”

We do ourselves the greatest favor by embracing no less willingly — in fact, enthusiastically — the personal world assigned to us by Heaven, no matter how limiting it might seem to us to be.

One of the most important works in Jewish literature is the Mesillas Yesharim, the most accessible book of the brilliant mystic Rabbi Moshe Chaim Luzzato (1707–1746).

He begins that work with the words, “The foundation of piety and the root of perfect service [of G-d] is for a person to clarify and come to realize as truth his obligation in his world.”Not “in the world.”