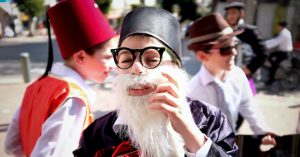 My Purim’s highlight this year was an interaction I had with two little boys, no older than 8 or 9.  The shul I attend is often visited by a number of “collectors” asking for small donations, usually for the poor or for needy institutions. Usually they are adults, with documentation backing the legitimacy of their quest for donations.

Sometimes, children approach people on behalf of their yeshivos or other charitable causes. On Purim, such undersized collectors abound.  I must have been approached by little people 20 or 25 times.  When my stash of dollar bills was down to one, wouldn’t you know, two youngsters approached me at the same time.

I smiled and showed them my last bill, identifying it as such.  One boy, whose hand held more revenue that the other boy’s, unhesitatingly pointed to the other and said “Please give him.”

But the boy who directed me to the other one gave me something priceless, the story I just shared.