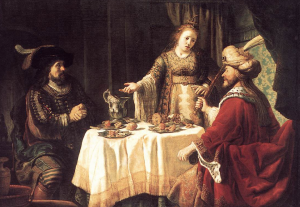 Due to circumstances beyond my control, I didn’t have a column in Hamodia this week, but thought I’d post a Purim-themed thought I wrote several years ago.  A joyous and meaningful Purim to all!

On Purim, Jewish men, to varying degrees, imbibe strong drink, and Jewish women do their best to keep them safe and anchored in civilization.  The holiday thus may not seem very female-centered.  But it is.

Not just because its hero is a heroine and the holy book about the historical event it commemorates is named after her, but because Megillas Esther verily revolves around femininity.

The pliable, preposterous monarch we meet at the Megillah’s start is a poster child (or, perhaps better, poster adolescent) for male chauvinism.  His 180-day drinking party, as the Talmud describes it, was a bacchanal of arrested-development “good ol’ boys” acting like louts, and entailed the debasement, and eventual execution, of his queen.

And the next action of the foolhardy king was to organize the antithesis of true respect for women: a beauty contest.

And Achashverosh, of course, ends up being manipulated by a woman, our reticent, modest heroine Esther, and led by her to dispatch the Jews’ mortal enemy, saving her people from his evil plans.

But there’s a good deal more here, too, although it’s a good deal more subtle.  Mordechai, the Midrash teaches us, was miraculously able to physically nurse the baby Esther when she was orphaned.  Thus the male hero of the Purim story is rendered, at least in a way, something of a heroine himself.

And the Talmud’s very exhortation that a man is to drink “ad d’lo yada,” – literally, “until he doesn’t know…” – can be seen as a subtle reference to another Talmudic statement, that “nashim da’atan kalos.”   That aphorism, often mistranslated as “women’s minds are weak,” is more accurately rendered “women’s daas is light.”  That is to say that the psychological entity called daas (the root of both the words yada and da’atan) is less sharply present in women than in men (while another entity, binah, is more present in women than in men).  What each of those entities precisely refers to isn’t for here and now, or for the likes of me to try to fathom.  But still and all, ad d’lo yada can be seen as implying some sort of “feminization” of the aspirant.  So men who “successfully” achieve the spiritual goal of drinking on Purim might be said to have in some way connected with their inner female.

Surprising and sublime thoughts like those are lost, however, on many people, certainly those who imagine they are somehow taking a stand for womanhood by celebrating, of all people, Vashti.

Yes, Vashti.  The villainess of the Purim story, who enslaved, beat and humiliated Jewish women, and forced them to do work for her on the Sabbath.

What seems to have endeared Vashti to some simpleminded opinionators is her refusal (although out of sheer vanity) to obey Achashverosh’s summons to appear at his bash.  As one pundit put it: “Saving the Jewish people was important, but at the same time, [Esther’s] whole submissive, secretive way of being was the absolute archetype of 1950’s womanhood. It repelled me. I thought, ‘Hey, what’s wrong with Vashti? She had dignity. She had self-respect’.”

Well, she had self-regard, anyway.  So did for that matter, Ilse Koch, the “Beast of Buchenwald,” who stood up to her accusers in a West German court.  But never mind.

Another writer describes Vashti as “a brave woman who risked her life for her beliefs,” seeing the Megillah’s message as, “Women who are bold, direct, aggressive, and disobedient are not acceptable; the praiseworthy women are those who are unassuming, quietly persistent…” and laments “the still-pervasive influence of the Esther-behavior model.”

And yet another advocate, a Reform rabbi, presumably oblivious to why feet are stomped at parts of Megillah readings, wrote: “Why aren’t we insisting that our synagogue communities cheer and stomp their feet at the mention of Vashti’s name? She is a foremother in the best sense of the word – assertive, appropriate, courageous.”

Although it’s hardly the first time it has happened, it’s still sad to see a carefully preserved Jewish historical tradition sacrificed on the altar of a contemporary ism.

But something’s sadder here, a tragic sort of vinahapoch hu.  In their blind capitulation to the contemporary notion of feminism, the sacrificers here not only mangle the Megillah and mistake a malevolent oppressor for a role model.  They miss entirely the genuinely feminist message of the Book of Esther: that the true power of womanhood isn’t to be found in trappings of manhood like self-regard and obstinateness, but in the embrace of the quintessentially feminine traits of modesty, selflessness, faith and courage.