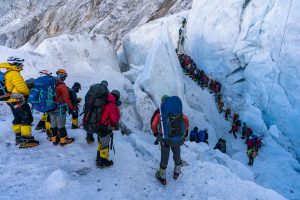 Ever find yourself in a long “10 items or less” supermarket line waiting for the cashier to check the price of kumquats for the lady who apparently considers all her fruits and vegetables to count as a single item?

Well, even if you have, you might compare your experience with the recent one of the hundreds of people bundled up in minus-20-degree weather waiting patiently in line on a narrow path more than 26,000 feet above sea level to reach the summit of Nepal’s Mount Everest. And, in the supermarket, you weren’t likely laden with an oxygen tank – a necessity at that altitude – whose contents were steadily diminishing.

What’s more, you probably didn’t have to navigate past the body of someone who died while waiting on line before you.

What makes people do things like climb what they consider the world’s highest peak (which in fact is probably Gangkhar Puensum in Bhutan)?

After all, according to mountain guide Adrian Ballinger, “humans just really aren’t meant to exist” in such places. “Even when using bottled oxygen,” he explains, “there’s only a very few number of hours that we can actually survive up there before our bodies start to shut down. So that means if you get caught in a traffic jam above 26,000 feet … the consequences can be really severe.”

Indeed. At this writing, 11 people are known to have breathed their last on treks to or from the summit of Mount Everest this year. The quest has claimed the lives of almost 300 people since 1923.

I suspect that those who spend considerable amounts of time, effort and money – the average price paid in 2017, for permits, equipment and guides, to climb Everest was approximately $45,000 – are impelled, ultimately if subtly, by the human search for meaning.

Nineteenth century secular philosophers argued about what ultimate essential goal motivates human beings. The German thinker Friedrich Nietzsche contended that it was power; another German, Sigmund Freud, that it was pleasure.

Both tapped into something real, although they were, like all secular thinkers, blind men trying to figure out an elephant. That Hashem has granted humanity bechirah, free will, and that we can, as a result, actually accomplish – change the courses of our lives and, ultimately, of history – is a power unparalleled in all of creation. So the “will to power” that, unfortunately, mostly yields bullies and tyrants is, in its most refined expression, the exercise of gevurah, “strength,” that Ben Zoma defines as “hakovesh es yitzro,” one who, by force of will, overcomes his nature (Avos 4:1).

And Freud was on to something too, as the Ramchal begins Mesilas Yesharim with the surprising statement that the most basic ideal of life is the pursuit of pleasure. Ultimate pleasure, that is – the pleasure of “enjoying the radiance of the Shechinah.” But the German secularist, of course, couldn’t see past the temporal, ephemeral yearnings of this world to the ta’anug ha’amiti, the “singularly genuine pleasure,” of the next.

Which brings us to the third nineteenth century conception of human motivation, that of the Danish thinker Søren Kierkegaard. He wrote of the “will to meaning” – the yearning to achieve some truly meaningful, ultimate goal in life.

His approach was popularized by a Holocaust concentration camp survivor, Viktor Frankl, whose 1946 book “Man’s Search for Meaning,” was deemed by a Library of Congress survey to be one of “the ten most influential books in the United States.” By the time of Frankl’s death in 1997, the book had sold over 10 million copies and had been translated into 24 languages.

There indeed seems to be an innate human aspiration to achieve something “meaningful,” to aim at some larger-than-oneself “accomplishment,” no matter how strangely some people may define that for themselves. For one person, such meaning may entail achieving a mention in the Guinness Book of World Records for the most slices of pizza eaten while riding a unicycle and simultaneously juggling balls. For others, the grand vision is the scaling of a mountain, even – especially? – if it entails danger.

For others still, namely those of us who recognize our Creator and His will for us, the accomplishment to reach for is a spiritual one, achieved through Torah and mitzvos. At certain times in history, aiming for that goal also entailed great danger. In our own times, baruch Hashem, it does not, although it may not offer a simple, obstacle-free and easy path.

As for us, well, while we may wish the Everest climbers every good fortune, we’ll be focusing in coming days on a very different mountain.

Have a happy and meaningful Shavuos.