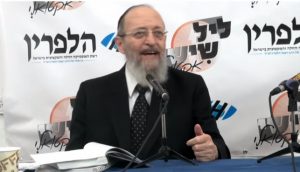 It was with great sadness that the first bit of news to reach me after Shavuos here in Yerushalayim was the petirah of R. Nosson Kamenetsky zt”l. While some will remember him for the controversy surrounding his two-volume Making of a Gadol, there are far more memorable images of him that history should retain.

First and foremost, hundreds of talmidim have only warm memories of the decades he spent in his primary vocation: as a teacher of Torah, most notably as a rosh yeshiva at ITRI. He was also a paragon of the mussar movement, receiving and treating people with incredible dignity and respect, even when few around him evinced anything close to the same refinement. It was always accompanied by the trademark Kamenetsky smile, that added another dollop of encouragement to all who spoke to him.

He was slavishly devoted to the truth. This may have been his undoing in writing Making of a Gadol, as parts of the community were not ready for a detailed consideration of some events and personalities in the Torah world. Even in presenting the work to the public, he could not escape the truth: his introduction offered ample consideration of both sides of the question as to whether Torah biographies should be entirely factual or hagiographic. He would not present his arguments without allowing the reader to consider the alternatives. His devotion to truth ensured that he refused to walk out of, or distance himself from, the yeshiva world even after some friends let him down, and lesser individuals savaged him in his own neighborhood. He understood the primacy of limud Torah and the community that nurtured it, and could not entertain any notion of lessening his identification with it.

My most vivid memory of him was of an exchange just a few months ago. The last time I visited him in his apartment, my son asked him a difficult question about how to explain some apparent shortcomings in the community to his own children. At one point, my son pushed him to better define one of his answers. “But what does Daas Torah say about that?” my son asked. Rav Nosson looked him straight in the eye and responded, “Daas Torah is that you should use your own brain!” He could hardly be called a free-thinker (like the European maskilim were called), but he put individual sechel on a pedestal. I can’t think of a quality that is so often in short supply, and that will be so sorely missed.

By Friday night, he had lost consciousness. He came to, briefly – long enough for his wife to help him recite the bracha and count the final day of the Omer, or the last step in the process of self-elevation in preparation for the receiving of the Torah. They were the last words he uttered – at least in this world.

His Making of a Gadol was conceived of as a history not only of his father, R. Yaakov zt”l, but of the world that produced him. Someone will have to do the same for R. Nosson, so that we might still learn how to reverse engineer someone of his stature.