The Equality Act: A Direct Assault on Jewish Values 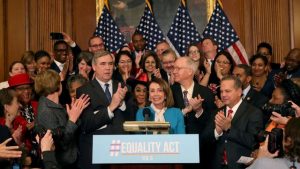 Although the bill is not expected to pass the Senate this year, the fact that the House approved it should alarm us nonetheless. It will inevitably be reintroduced in the next Congress, and LGBT activists will continue to push for these policy changes at the state and local level. It will have professional and personal consequences for all Americans and disproportionately impact observant Jews. Let us understand why.

At its root, the Equality Act declares the Torah to be a bigoted document, and all those who follow its guidance, whether Jewish, Christian, Muslim or other, to be bigots as a result. This is true because the Torah says that man and woman are different, that marriage is between man and woman, and that certain relationships are pure while others prohibited. Attempting to remain true to these beliefs could be construed as discrimination under the Equality Act.

There are many harmful consequences of this policy, impacting businesses, non-profits, synagogues and other houses of worship, and individuals.

Take, for example, the Masterpiece Cakeshop case in Colorado, in which Jack Phillips was penalized because his conscience would not permit him to design a cake celebrating a non-traditional “marriage.” The Equality Act could put Jewish wedding halls, bands, caterers and photographers out of business were they to refuse to provide their services in a parallel case. Even a synagogue that rents out a hall for weddings and other celebrations would be at risk.

Furthermore, businesses needing individuals of a particular sex would be obligated to hire based upon expressed gender preference, rather than biology. Ultimately, it could become impossible for businesses to cater uniquely to observant men or women, especially those who are strictly shomer negiyah, who avoid even casual contact with those of the opposite biological gender.

Sexual orientation and gender identity policies may also be the undoing of many religious charities. The Downtown Hope Center in Anchorage, Alaska was sued after they declined to allow a biological male who identified as a woman to stay overnight in their shelter for battered women. The fact that biological women – and all the more so women in shelters providing refuge from abuse – often feel unsafe sleeping near unfamiliar men was of no interest to government investigators.

Meanwhile, faith-based foster care and adoption agencies in several states have been forced to close down because they place children in homes with both a mother and a father in accordance with their religious beliefs. Under these rules, a Jewish agency could be told that it can no longer insist upon placing Jewish children in traditional Jewish homes. When charities are forced to cease providing services due to these sexual orientation and gender identity policies, those who suffer most are the populations these organizations serve. These rules have already exacerbated the national foster care crisis, forcing children to live in group homes instead of with individual, stable families.

There’s more. The Equality Act would constitute a nationwide gender identity health care mandate. By expanding public accommodations to include health care, the bill would require Orthodox doctors and nurses to perform and prescribe “transition-affirming” therapies, even if they feel these are detrimental to patients. Hospitals, even those with religious missions, would be forced to provide these procedures, and insurers would be required to pay for them.

The politicization of medicine would ultimately affect families. If the medical community is expected to provide hormonal and surgical interventions for adults, the same will be expected for children. Activists suggest social transition as young as 4, puberty-blocking drugs as young as 9, cross-sex hormones as young as 14, and surgery by 18 or younger. These drastic therapies come with harmful and potentially fatal side effects: increased risk for cancer, heart disease, liver disease, and, of course, sterility.

Many women of all (or no) faiths have an understandable aversion to sharing bathrooms and locker rooms while in a state of undress. For most observant Jewish women, even a swimming pool would be off-limits if biological men were present.

Religious Jews understand that the distinct physical, psychological and spiritual natures of men and women are both a scientific and Biblical reality. The Equality Act would directly undermine our Constitutional right to free exercise of our beliefs, and, of course, send the message that a traditional understanding of marriage and gender are “bigoted” and even punishable by law.

This is why sexual orientation and gender identity laws like the Equality Act make for terrible policy. Exempting oneself from these policies through religious freedom protections is insufficient to address the general problems posed by the bill—for women, for medical professionals, for families—nor to address the negative message this bill would send concerning traditional beliefs.

Although it is unlikely to become law this Congress, the Equality Act is not going to go away. It is time for the Jewish community to vocalize their concerns and stand up for true equality, which respects our legitimate difference of opinion on the meaning of sex and marriage.

Rabbi Yaakov Menken is the Managing Director of the Coalition for Jewish Values. Monica Burke is a Research Assistant in the DeVos Center for Religion and Civil Society at The Heritage Foundation.

This article first appeared in the Jewish Press.