Queen Esther: How to be a Strong Jewish Woman in a Man’s World 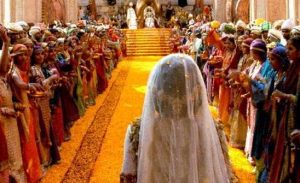 Many years ago, after it finally dawned on me that there are some quite disturbing adult themes hidden between the lines of the first couple of chapters of the Scroll of Esther, I began to be a little less (make that a LOT less) enthusiastic about my daughter dressing up as Queen Esther on Purim. After all, do we really want our daughters aspiring to be someone who was abducted and raped by an evil, rapacious despot– even if she does become queen of the realm and saves the Jewish people in the process? And things don’t look good especially from a religious perspective; a nice Jewish girl is forced to marry this Persian schlub, and she even has a child with him. It’s not exactly a story which ends happily ever after.

From this perspective, dressing up like Queen Esther would seem to be celebrating a tragic case of systemic female subjugation and intermarriage. Why would Jewish custom seem to condone it and even glorify it?

But hopefully, we get wiser with age, and things that once seemed ill-fitting and inappropriate can be appreciated anew when we come across a fresh new perspective. Such was my experience when studying the Yosef Lekach commentary to the second chapter of the Scroll of Esther.

A pity that some of our more liberal co-religionists seem to travel in the opposite direction. The more they encounter traditional Jewish texts, the more they want to distance themselves from its message. Tragically, instead of turning to Biblical narratives and its classic commentaries to serve as a moral compass with which to navigate the stormy sea of moral relativism and follow-your-feelings spirituality, they have done the opposite. They’ve embraced the zeitgeist, and have either re-written or written out the traditional narratives that don’t jive with it.

Case in point is the recent article in the “Acts of Faith” section of the Washington Post written by Ruth Balinsky Freidman. Instead of digging beneath the surface to find something positive and redeeming about Esther, the author can only bring out the overused tropes of #MeToo.

In her view, Vashti is the real heroine of the story for being combative and standing up to her husband’s demeaning orders at the cost of her life, while Esther is cast as a hapless victim of abuse who is to be pitied, not emulated.

While there is certainly something important to be learned about the high-stakes gender warfare that is taking place in ancient Persia, clichés promoting third wave radical feminism isn’t one of them. I believe a more careful reading of the text will shed a surprising light on Vashti’s failure and the hidden strength of Esther’s character.

Although Esther only comes on the scene in the second chapter, the backstory provided by the first chapter is critical in understanding how Esther will emerge as our heroine of the story. As is well known, Esther’s predecessor, Vashti, was executed because she refused to accede to the humiliating demands of her husband, Achashveirosh. She is simply unwilling to play along and objectify herself by exposing herself in public for his pleasure and ego satisfaction. Vashti’s strident feminist resistance was certainly brave, but ultimately counter-productive. In fact, her public execution was purposefully utilized by the Emperor’s advisors as a way of serving notice to all the women of the empire: Men must now be treated by their wives as the masters of the house—or else.

Vashti’s pushback actually pushed the cause of women’s liberation to go backward.

This is how the first chapter of the story concludes.

In the second chapter, we find that a new set of advisers to the emperor are devising a new strategy to pick a queen, a strategy that is designed to avoid the mistakes of the past. In order to ensure that every prospective candidate for the position will be utterly meek and submissive—and resemble nothing like Vashti–the advisors recommend a selection process with the following guidelines:

Why all are these elements necessary? It’s simple, once you understand the end goal.

The main element of the strategy is to reinforce the message that the candidate is only valued for her physical appearance and for nothing else. Not for her ideas, not for her insight, and not for her character. None of the things which she can change and improve upon and make them genuinely hers by dint of her own efforts. Emphasis was given to the one thing you can’t really change fundamentally–your facial appearance. It is completely external to who a person really is.

This was goal: get the candidate to feel valued for something that is not in her own control but in the hands of those around her to bestow their approval– if she is deemed worthy of it by them. That is the key to removing self-esteem and self-confidence—induce a person to rely completely on the judgment and approval of others regarding something one can do nothing about.

Secondly, make sure she does not come from a family of high rank or social status. Because any source of personal pride will be an obstacle to inducing complete psychological dependence on the emperor. Everything she has and everything she wants comes from the good will of the king and his men. Make sure all her needs are taken care of exclusively by the emperor’s officers and not from the outside. Cut off all contact with family and friends who might support a separate sense of self.

Lastly, every candidate must spend a full year being preoccupied with one thing—how she can look and smell her best to win the approval of the emperor. There is no other point to her existence for an entire 12 months other than to become the ultimate object of desire.

This carefully crafted process will naturally force each candidate to break with her past identity, redefine herself –not as a queen in her own right, but as a mere object for royal pleasure who is completely dependent on, and beholden to, the male approval.

But the G-d of Israel has a few surprises in store for the king’s advisors.

Despite all their elaborate psychological profiling and conditioning to create the perfectly submissive queen, the supernatural charm bestowed upon Esther allows her to simply upend each and every one of their strategies:

It’s the first example of “venahafoch hu” in the Megillah: Esther retains her past identity and her family ties. She gives orders to her own subordinates and she takes orders from her own religious authority—not the government’s. She doesn’t allow herself to be valued for her physical appearance. She doesn’t require the approval of others to give herself a sense of esteem and worthiness. Not exactly the hapless victim of the systemic subordination of women, is she?

In short, Esther is the quintessential strong Jewish woman in a man’s world: Standing up to the enormous social pressures to give up her independent identity and go along with the herd mentality of male approval-seeking. Fearlessly adhering to her religious duties to obey her rabbi’s instructions in the face of government coercion. And finally, resisting the temptation to obsess about her looks, and never valuing herself primarily in terms of how men rate her level of attractiveness.

So on second thought, Queen Esther seems to be the best Jewish role model for my daughter that I can possibly think of…

(I just hope she’ll go easy on the make-up.)

Dovid Kornreich grew up in the U.S. and made aliya when he married in 1996 and has been teaching Talmud and Jewish thought in in Jerusalem for many years. He has an enduring interest in the conflicts between Torah and contemporary thought, specifically science & feminism, and currently maintains a blog at the Times of Israel.