Teaching Children How To Think 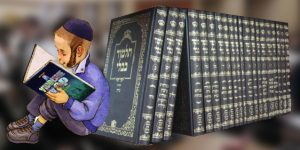 Then there is the one about the Russian ticket collector who accosts a Jew in one of the train cars. “What makes Jews so smart?”

“How much do you want for that jar of herring, Jew?”

“Two rubles.” He forks over the money, and begins eating the contents. All is fine till the next stop, where the collector sees herring for sale for a fraction of the cost, and angrily confronts the Jew, for grossly overcharging him.

So what is the reason for Jewish intellectual success? Gefilte fish? The hostility of non-Jews leaving us no other option? A tradition of study? A genetic disposition for a fatty substance that speeds electric flow between synapses? G-d’s special blessing?

Popular interest in the cause of Jewish smarts leads to some interesting phenomena. Like my Korean friend, who has insisted for decades that Jewish study of the Talmud leads to Jewish overachievement. No amount of arguing that the vast majority of Jewish Nobel laureates he pointed to would not be able to tell if a volume were right side up or upside down could convince him otherwise. He always shrugs it off, claiming that the tradition of how to think survived in secular form even in families that had distanced themselves from religious practice. He still thinks that Talmud is the way to go.

Curiously, a series of books published in Israel primarily for charedi children promotes the same principle, The several books in the A Yiddishe Kop series are gobbled up shortly after publication. They have been translated into several languages (including English), and you’ve seen nothing like them before. They are not about a law-enforcement officer who speaks the dialect used for centuries by Eastern European Jews, but about the ability of the Jewish mind to solve problems.

They are the product of the creative genius of Gadi Pollack. We first encountered him many years ago as the capable illustrator of one of R. Baruch Chait’s books. Gadi hails from the former Soviet Union, and moved into complete observance. After considerable success illustrating books that others had written, he tried his hand at his own.

Gadi sees things were others don’t. (Learning once with a chavrusa, he asked him to switch positions at the table. He had been facing the Jerusalem-stone wall of the beis medrash. The veins of color running through the stone suggested all sorts of patterns and things. They were distracting his concentration on the gemara.) The premise of the books is that when you pay attention to detail and nuance, you can learn a great deal through deductive and inductive reasoning.

The books are collections of full-color illustrations of scenes from charedi life. Each is accompanied by a series of questions about the people and events in the picture. The reader’s first reaction is “how am I supposed to know! The picture doesn’t say anything about that!”

Having nowhere else to go, the reader then takes a closer look – especially at small details.

Each picture is saturated with them, largely because Gadi’s own eye takes in everything. A picture of a father and son in front of their home, poses questions to the reader about the weather the night before. (It was hot, as evidenced by the small pool of water near the drainage hose from the air conditioner.) A depiction of a frum family on an outing in their car is keyed to questions about the direction of flow of the river on their left (the hint is in a road sign on the other side of the car indicating a grade in the road), and whether the car is accelerating or decelerating (the answer combines the fact that the low-gas gauge on the instrument panel is illuminated, while the navigation screen shows a gas station just beyond the approaching exit ramp.) Many of the questions require knowledge of halacha and minhag that would be available to children with very strong Torah chinuch.

Answers are provided in the back of the book. Sometimes the author will show multiple ways of arriving at them. He does not, however, believe that there are multiple lessons to take away from his book. In a prominent introduction, he spells out for the reader what the takeways should be: If you enjoy the problem-solving, whether you got all the answers or only a few, there is only one place you should head – straight to your gemara!

Inviting people to learn more gemara certainly resonates with me. Exploring the sefer with the enthusiastic help of a collection of my granddaughters, I did find the message amusing. And very progressive. Half the readers of the books are girls. Apparently, there are some in the charedi world who, as of late, must be advocating gemara study for women!

Resonate or not, I don’t think that the author’s conclusion is correct. At least not if the author means (and he may not) that the sole place for observant Jews to go to develop sharper reasoning skills (and for parents to go to develop them in their children) is gemara. Gemara, in fact, is hard to beat. But it won’t work for everyone. Something that could conceivably reach some of the others is as close as the Shabbos table

A generation ago, I was irked by the parsha sheets that the kids came home with each week. These were supposed to be reviewed at the Shabbos table. Some teachers provided answers for the parents; others did not bother. The questions were often boiler-plate and unimaginative. The answers were often enough wrong! They were sometimes given out to entire grades, or multiple grades, which meant going over the same material several years running.

I thought that there should be a better way. I developed what became known as Abba’s parsha questions, which meant that they were next to impossible to answer, were quirky and often humorous – but forced participants to think. The aim was not to come up with the “right” answer, so much as to take a closer look at the way the Torah phrased things, and to think through the background to the action. Only two people had good track records at figuring out what was on my mind without more assistance. (One was my youngest child, now a founding member of a new kollel in Berlin; the other a bright young women who was a student of mine at Loyola Law School, and turned into a regular Shabbos guest. Both managed to figure out my twisted sense of humor.) That didn’t matter. When those around the table could not come up with a satisfactory answer, I offered a series of hints, calling attention to nuances in the text, or questions about the events described. After a few of those hints, the solutions appeared.[1] Along the way, my kids and our guests not only got to sharpen their thinking skills, but engage in animated conversation about the ideas and events involved.

A few of my kids suggested that I write up the exercises, and turn them into a book for parents. I began to do so, and approached a publisher. They were sympathetic, but turned down the idea cold. They knew book sales, they said. The last thing people want to do is to have to think! Too difficult and painful! The book would never sell.

So I dropped the idea. Perhaps the success of A Yiddisher Kop suggests that my decision was premature, and the time will still come for moving the Leyl Shabbos parsha event from uniform and boilerplate to creative.