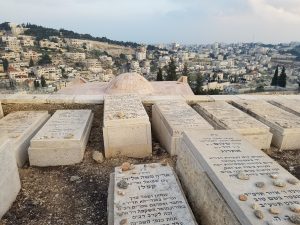 Yesterday, 14 Shevat was the yahrzeit of R Aryeh Kaplan z”l, one of the most important teachers of Torah in the 20th century, and a huge influence on my early life. I would not have realized it, were it not for the fact that a new friend, the son of my new publisher called and asked if I wanted to go to the kever. We initially hired security to accompany us; unfortunately, such is the reality for visitors to Har Zeisim today. But the hired gun, who got there before we did, turned around when he spotted three armed members of the Mishmar HaGevul right near the kever. He felt he was no longer necessary. We were able to drive up to within feet of the grave. Once there, we were protected by the zechus of the greatest authentic popularizer and explicater of kabbalah in a century; by two young female soldiers standing guard at their post; and by a third soldier who must have been uncomfortable hanging out with the women. Instead, he spent his guard duty time loudly reciting Tehilim at the nearby kever of a Sefardi mekubal.

All this, of course, was going on just a few paces from the site where the two Temples once stood. Until such time that we can once again hear the rustling of the garments of the kohanim as they silently perform their avodah, it was the sweetest sound imaginable