And Nothing But the Truth 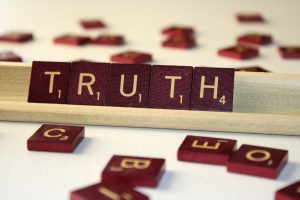 Well, it’s after Yom Kippur – and a gutteh kvittel to all! – so I can continue my public discussion with Rabbi Menken, but this time, I’ll be brief.

I’m not sure how the discussion has seemed to crystallize around President Trump’s Charlottesville comments, but I do think that bending over backward to parse the president’s many contradictory words does in fact betray the sort of “team mentality” that I find pernicious.  I am willing to praise the president for good things he says and does, and to criticize him for things I think are not defensible.  If Rabbi Menken is willing to state the same, then we just differ on our comprehension of Mr. Trump’s words.  Readers, as Rabbi Menken and I have both noted, can access them easily and make their own judgment.

But they should bear in mind, too, that the president’s second, responsible (if prepared and carefully read) condemnation of Nazis and supremacists came only after two days of relentless criticism from media and public figures.

And that it was not only “liberals” who excoriated the president, but staunchly conservative writers in media like The New Standard and National Review – and Republican lawmakers like Orin Hatch and Paul Ryan.

And that, after the president read that second statement,  when a reporter called out to ask  him if he wants the support of white nationalist groups, many of whom in fact support him, he ignored the question.

As to the Civil Rights Act issue, Rabbi Menken is mistaken to imagine that only individuals and not yeshivos would be greatly affected.  There is no religious exemption in the act, which is why a white supremacist religious institution would not be permitted to reject a black applicant for a teaching position based on his race.

Quibbling about the legal or colloquial meaning of “occupation” is not a productive use of time.  I will only restate what I wrote earlier: Israel has not annexed Yehudah and Shomron.  So it matters not at all if the territories are “someone else’s land.”  They are not (yet) Israel’s.

All that said, I am gratified that I was correct in my assumption that Rabbi Menken agrees with me that Torah-Jews should not “embrace any party or personality willy nilly, and [should] always remember that it is not a party or movement that commands our fealty, but a Divine mandate.”  That is really the whole of what I asserted in my original Hamodia column.