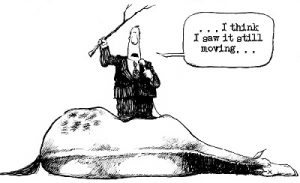 We are down to the wire on time, we are down to the wire on our arguments, and we come closer and closer this Erev Yom Kippur! I am genuinely delighted that Rabbi Shafran has posted yet again, not least of all because it proves I’m not alone in going at it until we finish the job (colloquially known as “beating a dead horse,” although it was not a horse sent l’Azazel until it became ayvarim ayvarim). I am honored that he calls me his friend; to me he is both friend and mentor. I remember Rabbi Shafran’s helpful advice very early in my writing career, as well as his initiative at the Agudah to leverage volunteers (such as myself) to generate letters in response to media articles that treated Orthodox Jews and Judaism unfairly. B”H it is more frequent today to hear an Orthodox voice in response.

Rabbi Shafran has me on the Civil Rights Act being applied to behavior choices. Not because of yeshivos, as I believe they could get religious exemptions, but if, for example, a private homeowner were to decline to rent a room to someone because of those choices. The question is what sort of protections would be in place to avoid another Masterpiece Bakery. But this is a situation where his argument is that Republicans (or at least Trump) are just as bad, and while this may be true, we still recognize that conservatives are more likely to protect religion-based exceptions.

I am occupying space in my chair, but that’s not a problem, because it’s my chair. Similarly, it is true that Resolution 242 refers to territories “occupied” by Israel in the then-recent conflict, and thus the term “occupied territories” is offensive but accurate, but that doesn’t make Israel an occupier of someone else’s land. That is the position that the Republicans reject outright, and which Barack Obama endorsed before the UN General Assembly.

As I said before, when it comes to what President Trump says, you have to skip the media commentary and look at what he actually said. In his first remarks, he never referred to good people, or nice people, or anything of the kind. Rather, he condemned bigotry and violence, no matter its source:

Without question, this includes the Nazis. What drove liberals crazy is that he dared to say “many sides,” thus implicitly condemning Antifa as well. Never mind that Antifa is both more violent and growing while neo-Nazis are reviled, left-wing hate “does not exist, nor has it ever existed” (George Orwell). Maxine Waters replied to the President, “not many sides. Your side.”

And then he said the same things the following day, without a teleprompter: “I think there’s blame on both sides. And I have no doubt about it, and you don’t have any doubt about it either… And you have some very bad people in that group. But you also had people that were very fine people, on both sides.” That is when he specifically said that when he was talking about “fine people,” he was not talking about Nazis. “You had many people in that group other than neo-Nazis and white nationalists. Okay?”

And then the President underscored that the neo-Nazis were not the “fine people:” “they had some rough, bad people — neo-Nazis, white nationalists, whatever you want to call them — but you had a lot of people in that group that were there to innocently protest and very legally protest.”

Rabbi Shafran claims that the President “praised the ‘good people’ on ‘both sides.’ One side of which was the Nazi.” I am honestly dumbfounded, because we have the transcripts, and they are extremely clear (to any objective reader, a rare commodity in the Washington Post newsroom). Whether or not the President was mistaken about the presence of non-white supremacists who opposed removing the monument at the Charlottesville rally, this does not the claim that he was referring to the neo-Nazis when he said “fine people.” On the contrary, everything President Trump had to say about Nazis was how they “display[ed]… hatred, bigotry and violence.” The fine people were “other than neo-Nazis and white nationalists” [his words, my italics].

What makes this especially amazing is that the President is an extremely unclear speaker. He’s all over the place. He says things he doesn’t mean, he contradicts what he said yesterday, it’s extremely easy to believe that he could actually have misstated his beliefs in such a way that his comments could legitimately be read as calling Nazis fine people. But it never happened. And it doesn’t matter how many CNN reporters tell you otherwise, it still never happened.

This is not a partisan position, as Rabbi Shafran implied in his first essay on this subject (which implicitly criticized an earlier article of mine, which defended the President on precisely this issue). It’s an objective reading of the transcripts. And I hope that Rabbi Shafran, who is an incredibly careful wordsmith, will go over the full transcripts for himself and recognize that this is indisputable.

From that first, my concern in this discussion was that our public statements in line with conservative views, expressed because we are Torah Jews, should not be misconstrued as falling into a “political sports team mentality.” The truth is exactly as Rabbi Shafran said most recently: “Torah Jews are perceived, and rightly so, as holding conservative positions on a number of moral issues.” And of course I agree that we cannot “embrace any party or personality willy nilly, and that we always remember that it is not a party or movement that commands our fealty, but a Divine mandate.” Defending the President’s post-Charlottesville remarks was neither embrace of his every position, nor claiming he was part of “our team.” It was responding to unfair criticism by pointing out that he called our attention to a real and growing problem, one which will surely plague Jews on campus and beyond in the coming year — as it already has.

G’mar Chasima Tova! Neither of us, I imagine, will have more to say on this issue. At least, not until after Yom Kippur!