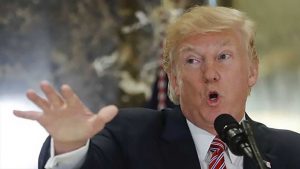 President Trump was roundly criticized for failing to call out neo-Nazis or the KKK by name in his first statement on the tragic violence in Charlottesville last weekend. Even many others in the GOP, including Marco Rubio and Orrin Hatch, indicated that the President should have been specific.

Yet the fact that the planned rally turned into a very two-sided violent melee is undeniable. And here’s what the President said:

We condemn in the strongest possible terms this egregious display of hatred, bigotry and violence on many sides, on many sides. It’s been going on for a long time in our country. Not Donald Trump, not Barack Obama. This has been going on for a long, long time. It has no place in America. What is vital now is a swift restoration of law and order and the protection of innocent lives. No citizen should ever fear for their safety and security in our society.

The words others found offensive were: “on many sides.” Why, they demand, didn’t the President immediately condemn the neo-Nazis and the KKK by name? When pressed on this, the President replied:

“What about the ‘alt-left’ that came charging at, as you say, the ‘alt-right’? Do they have any semblance of guilt?”

The President is right. The presence of odious hate groups on one side does not excuse violence by hate groups on the other. But the left prefers to pretend that left-wing hate doesn’t exist, rather than addressing it.

Maxine Waters responded to the President by tweeting, “No, Trump. Not on many sides, your side.” This is both factually wrong and profoundly dangerous.

The problem with condemning the Nazis or KKK is that it is simply too easy. Just days earlier, a friend and colleague criticized a particular organization as being so weak that it could make no public comment on any issue “except to condemn Hitler.” The only people who don’t regard Nazis as evil are other Nazis.

The question which we should be asking is: why is the left whitewashing Black Lives Matter (BLM) and Antifa?

Of all these groups, the Neo-Nazis, the KKK, BLM and Antifa, which one called for violence against police, which manifested itself in shootings of law enforcement officers in Texas and Louisiana? Which of these groups threatens free speech on college campuses in this country, violently preventing students from hearing opposing views?

I don’t know about you, but I consider policies and procedures that facilitate the disproportionate murder of young black men to be racist. And although every police force must police itself and remove racism from within its ranks, BLM’s hateful agitation has not only led to murdered police officers.

In Baltimore, the death of Freddie Gray in April 2015 led to riots and the politically-motivated prosecution of six officers (half of whom were black themselves) for following what was standard procedure at the time. This led to police being afraid to do the aggressive work necessary to get illegal guns off the street before they are used.

The results can only be described as horrific. 2015 was the most murderous year per-capita in Baltimore history, with 2016 coming in second. 2017 is on track to exceed both. And in all three years, young black men have been hugely overrepresented among the victims. A 10-month-old baby nearly died in her car, which remained locked following the murder of her 26-year-old father in May—until a police officer heard her cry.

The fact that the officer was white shouldn’t even deserve mention. The killing fields of Baltimore are a violent white supremacist’s dreamland, thanks to BLM.

But the media won’t talk that way. The left prefers to imagine that BLM is a civil rights movement, solving a real problem. And this is hardly the only example of left-wing “human rights” causes serving as convenient cover for anarchy, hatred and violence.

If we are going to tear down hateful monuments, we should not start with statues of Robert E. Lee, whom most historians consider to be no more racist than many Northerners of his day. We should start with the Arch of Titus in Rome, celebrating the military victories of that Emperor. After all, the Arch focuses specifically upon the plunder of Jerusalem, and the desecration of the treasures of its Holy Temple. It is an indisputable celebration of ethnic cleansing and genocide.

But that is exactly why it should not be removed. We need to remember our history, in order to avoid repeating it.

Which of the following statements has incited more murders in 2017: “Heil Hitler” or “Free Palestine”?

Again, the answer is obvious. Everyone knows that Hitler was a Nazi. But all too many people forget that “Palestine” is the name given to the land of Judea by the same hateful invaders who built that Arch, in an attempt to sever the connection between the land and those whose home it truly is. Forget that Palestine is a name birthed from barbarism and ethnic cleansing, forget that it was nothing more than a distant province to its Arab rulers, none of whom possessed it within the past 500 years (save for a brief period of Egyptian control in the 1830s), and you can make “Free Palestine” sound like a civil rights movement.

But what does it really stand for? Consider that there are dozens of unquestioned occupations around the world, in places like Tibet, Chechnya, and even Northern Ireland. But only one call for “justice” is used to justify the murder of children.

The President should have named all of the hate groups involved, or none. The President was right the first time.

An earlier version of this article was first published in American Greatness, and discussed on the editor’s radio program.