Postscript to the Conversion Controversy 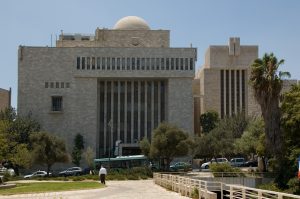 Listening to the buzz about the conversion kerfuffle last week, one would think that breaking the back of the Israeli rabbinate will becalm the angst of past converts unsure of their status, ensure equitable conversion procedures for the future, stabilize Turkey, and bring friendship and cordiality between #BlackLivesMatter and the Police Benevolent League.

Sorry to have to throw cold water on all this optimisim. In fact, few things will work against the interests of potential converts as opening the doors to private providers. Going “out of network” raises the price for medical care. In the case of conversion, the price will be paid in the suffering of the offspring of converts a generation later.

Readers have by now thoroughly familiarized themselves with Rabbi Dov Fischer’s excellent treatment of the subject. They realize that someone in Israel cynically calculated that the ignorance of the public would allow him to use the Ivanka Trump connection to strike a body blow at the Rabbanut. They now understand that Ms. Trump converted through a “network” beis din – a GPS court in Manhattan. Its validity was therefore never in doubt. The conversion that was questioned by the Petach Tikvah rabbinate was an “out of network” conversion. We don’t know why R. Lookstein treated this candidate differently than the ones (like Ivanka’s) that he referred to the GPS beis din. Neither, apparently, did the Petach Tikvah beis din. Their hesitancy to accept any private conversion was well-founded, and not directed at Rabbi Lookstein personally.

Rabbi Fischer alluded to, but did not flesh out, one element that could use some explanation. As a long-time member of a standing (or should that be sitting?) conversion court, I will try to fill in the detail – first with an analogy, and then with some reflections born of personal experience.

We have two models of conversion before us: individual provider vs. community protocol. Neither is perfect. Both have had their failures and can be corruptly manipulated. My contention is that there is safety in numbers. The community protocol idea is less fraught and highly preferable.

When we find ourselves in an unfamiliar city, what do we look for in a restaurant or a hechsher? The name of any ploni almoni rabbi, or a trusted larger organization? There used to be people who would piously intone that they would eat anything that had a rabbi’s imprint of the label. If it turned out that it was not factually kosher, that would be the certifying rabbi’s problem, not that of the consumer. I will assume that our readers have enough sophistication and yiras shomayim to reject that thinking. They trust communal hashgacha more than individual not just because they don’t recognize the name of the sole provider. They know a bit about the track records of the different options.

The kosher meat trade of early 20th century America made New York look more like Tombstone, Arizona. Trying to set a community standard of kashrus brought the early demise of Rav Yaakov Yosef, and ended the attempt to provide New York with a Chief Rabbi. (When one of his competitors for the kashrus turf was asked who awarded him the distinction of being chief rabbi rather than R. Yaakov Yosef, he replied, “The sign painter.”) The industry was riddled with deception, fraud and incompetence. The emergence of the OU as a supervisorial agency was a banner achievement not just for the organization, but for Orthodox Jewry.

National supervision addressed two problems: corruption and maverick standards. The first was a function of how people were paid. A mashgiach paid by the company he supervised often had a hard time removing his name from an establishment when he found a problem, since it meant that he wouldn’t be bringing home a salary that week. One of the signal accomplishments of the OU was placing an organizational buffer between client and mashgiach. A rabbinic supervisor can blow the whistle on an establishment without fear of reprisal. This alone is a huge advantage in keeping things honest.

The second problem relates to the ability of people to find novel approaches to the arcane details of halacha. These individualistic interpretations were sometimes the product of ingenious creativity, and sometimes an outgrowth of rank ignorance and incompetence. In both cases, consumers who would not rely on similar arguments in their own kitchens were ill-served by such reasoning. Community-wide vaadim and national organizations ensured that standards were seen as defensible by a larger consensus.

Whatever problems plagued kosher supervision bedevil conversion – but the stakes are much higher, and the consequences more poignant. Sole provider conversions were often (and continue to be) cash cows. Private batei din can name their own prices, and frequently attach hefty surcharges for “expedited service.” (A few months ago, the Israeli government opened a criminal case against a former official of the Rabbanut. Among other goodies was a claim that a Russian tycoon wanted a quick conversion for his love interest, and said rabbi turned to an American colleague who flew to Russia and turned her into a loyal halachic Jewess in two weeks. According to the charge sheet, they split the $400,000. A few years ago we read of a high-profile divorce, where each spouse tried charging the cost of a conversion to the other. While my local GPS court charges a few hundred dollars as an administrative fee, that conversion cost multiples of five figures. There is a plethora of less dramatic stories, all of them sharing a common denominator of avarice getting in the way of good judgment. These just don’t happen with a GPS court where no one has a pecuniary interest in accepting or rejecting a candidate.)

The maverick standards problem was even more common. For decades, no one reined in rabbis who simply were sloppy or didn’t care about securing evidence of intent to keep mitzvos, which the vast majority of talmidei chachamim feel is a sine qua non of conversion.

After decades of sub-par conversions in the US, the Rabbanut in Israel finally stirred itself into action. (It might be that they did so peremptorily and clumsily, but that goes beyond the scope of this essay.) They moved antipodally from their earlier position, and challenged all US conversion, other than that of people they felt they knew well. The creation of the GPS system meant the creation of agreed-upon standards and protocols that satisfied the Rabbanut, and were livable to all the Modern Orthodox batei din. The only ones who were not happy were the sole providers. Some were unhappy for very legitimate reasons, because there was absolutely nothing wrong with their practices. Others had less noble reasons to complain.

While kashrus can remain a matter of personal choice, conversion by definition can not. A convert wants to know that he/she will be fully accepted in a different city or country. Claiming that we should all learn to get along with each other’s standards is naïve and tilting at windmills. The word is out on the “street” that much Orthodox giyur in the past – and increasingly in the present – was problematic. Many, many have gone too far in their questioning. But no one has a quick fix for that. The bottom line is that people don’t relish the prospect of their future daughter-in-law’s Jewishness being questioned. The children of converts of thirty years ago are running, not walking, to more “accepted” batei din for what they see as an upgrade – a so-called giyur le-chumrah that removes any cloud of suspicion.

The beis din which I serve has a general policy not to perform such conversions, except when explicitly requested by a community rav. If we were to abandon this policy and do giyur le-chumrah as a sideline under a different name, we could easily enrich ourselves. We don’t, because every such conversion is, to a certain extent, a casting of aspersions on a rav who is no longer alive to defend his standards or decisions.

That does not quiet the malaise of large numbers of people who wonder whether their mother’s conversion was really valid according to the largest number of halachic figures. Telling them not to worry doesn’t work. They do have legitimate concerns. Sometimes, those concerns can be dealt with through thorough research. Sometimes they cannot. Had a GPS system been available decades ago, much suffering would have been avoided. Yes, there are problems with institutionalized systems. I contend that they are less severe, and less prevalent.

For decades, all of us in the Orthodox world railed against Conservative rabbis who converted people and told them that their conversions were every bit as acceptable as Orthodox ones. They lied, and those conversions were roundly rejected, so often producing heartache and suffering in the next generation. Ironically, some of us now invite the same tragedy by insisting that every rabbi has the right to determine his own policies and convert whom he wants. This leads to nothing less than chaos. There are good doctors and bad doctors. Anyone who blindly accepts any medical degree as valid takes his life into his own hands. Rabbis are no different. In a perfect world, there would be time to examine the bona fides of every converting rabbi. But the world is not perfect. Rumors will spread – usually by well-meaning, rather than vicious, people – about “problem” rabbis with atypical standards. Their geirim will run into problems. Community-wide conversion courts eliminate those problems.

Moreover, to pretend that all halachic positions are created equal is illusory. They aren’t. And like it or not, the Modern Orthodox community has shrunk to somewhere between one-quarter to one-third of the total Orthodox population. You can differ with the haredi world, but you cannot discount its effect on halachic decision-making. The halacha of the future will tilt right.

A conversion candidate who uses the services of private providers with reputations for ignorance, sloppiness, or ideological eccentricity is playing Russian roulette with more bullets than empty chambers. Rabbis who refer candidates to such courts do not act in the best interests of those candidates. The proven best way to protect those interests is community-wide batei din like the GPS network.

Private providers are inconvenienced by the shift to such a system, just as private mashgichim resent attempts to bring kashrus under a community banner. Such inconvenience should be recognized to be the price we pay to protect the interests of geirim, and to prevent the splintering of our community into groups that will not marry each other.