I Don’t Believe In That God Either 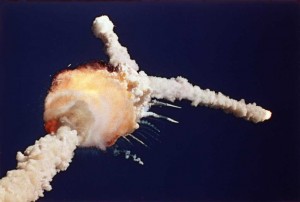 Last month marked thirty years since the tragic explosion of the Space Shuttle Challenger. Seven crew members died after the shuttle broke apart 73 seconds after takeoff. As I’m sure is the case with many of you, I vividly remember exactly where I was when this catastrophic event occurred. Along with many American children, my middle school class was listening to a live broadcast of the launch over the class speaker because Christa McAullife, an “ordinary” teacher from New Hampshire was on the shuttle as the first person chosen to participate in NASA’s Teacher in Space Project.

Even as children, when the Challenger exploded we understood that something historically tragic had occurred. We were stunned and searching for a way to understand what we had just heard. Our poor teacher was thrust into an incredibly difficult position with no preparation time or ability to craft a nuanced, sensitive, and meaningful lesson plan.

His words that day were forever seared in my memory because of how much they disturbed me, even at that young age. Without having the chance to process what had just transpired, he turned to us, his students and explained that he thought the Challenger had exploded because man was getting too brazen and encroaching on God’s territory in the heavens. God had struck down the Challenger, he said, because we had violated the boundaries that separate us from Him.

In the town of Berditchev, there was a proud, self-proclaimed atheist who shared with anyone who would listen his problems with a cruel, uncaring God. The great Chassidic Master Rebbe Levi Yitzchak approached him. After the atheist vociferously explained why he doesn’t believe in God, Reb Levi Yitzchak turned to him and said, “You know, the God you don’t believe in, I don’t believe in him either.”

When I heard my teacher describe with full confidence why God blew up the Challenger, I didn’t yet know the story of Reb Levi Yitzchak, but I did intuitively know that I didn’t believe in the God my teacher was describing. Would God really kill seven innocent people in such horrific fashion because they were involved in space exploration? That made no sense to me and I wanted no part of such a God. Looking back, I am tremendously grateful that I didn’t accept his reason and rejected his acting as God’s spokesperson. I rejected it, but it confused me and upset me to the extent that I remember it until this day, thirty years later.

My middle school teacher didn’t have time to formulate his reaction, but sadly, there are rabbis and teachers still today who, with plenty of time and space to prepare, are still presenting themselves as God’s spokespeople, communicating with full confidence the reasons and causes for the world’s catastrophes, natural disasters, and human suffering. One popular outreach rabbi has explicitly claimed in his online classes to know why certain people were killed in the Holocaust and that “blind children are being punished for watching pornography in previous lives” and that “cancer is caused by sin in this life” and “Down syndrome and autism are a result of a sin in a previous life.”

His loyal followers point to his success in attracting students and cite his influence and impact on thousands of people as justification for his method. However, the Torah never measured truth and authenticity by popularity. By that measure, we should have folded to other religions and ways of life long ago.

In next week’s parsha, Moshe pleads to Hashem – hodi’eini na es derachecha, make Your ways known to me so that I know You, so that I may find favor in Your eyes.” Moshe continues, “har’eini na es kevodecha – “Show me now Your glory.” What was Moshe requesting? What was it that he wanted to know?

Even more mysterious is Hashem’s response. “You cannot see my face, for no human can see my face and live… you will see My back, but My face may not be seen.” What is Hashem responding to Moshe?

The Talmud (Berachos 7a) explains that Moshe was requesting from God a window into understanding the meaning and order of the universe. Moshe sought insight into how God runs the world and an understanding of His system of justice. In essence, by asking to see God’s face, Moshe is saying, “God, let me see what you see.” Show me Your perspective of the world and Your system for what happens.

Hashem responds, “Moshe, I cannot show you My face, you cannot see through My eyes, because you are human and you are finite. By definition you are incapable of fully comprehending My system of justice and of appreciating the ultimate meaning and order of the universe. However, you can see the back of My head. Once the event or experience is over, there will come a time, whether in this world or the next, that you will see retroactively why events unfolded the way they did and why ultimately there is meaning and order to everything.”

While this dialogue in particular and the question of why bad things happen to good people requires greater elucidation, one thing is clear from this conversation. We are not empowered or entitled to claim to understand how Hashem runs His world. Indeed, to assert that you know with confidence Hashem’s ways and that you have access to His thinking is an act of heresy.

It is understandable that people who are suffering would try to identify exactly why Hashem is visiting this misery upon them. However, it is an exercise in futility. Our mission is to reflect on our circumstances and be motivated to grow, improve, and find a way to become better as a result. But attempting to uncover exactly why Hashem placed us in the particular position is something unattainable and a poor use of energy and focus.

This week, hundreds of people gathered in Yerushalayim to pay tribute to Dafna Meir Hy”d, who was murdered by a terrorist in her home in Otniel a month ago. Her fifteen-year-old son Akiva spoke and ended by saying:

And now, when everything has been cut down, I stand across from Him, and I am silent. I stand across from the Infinite, and I know that He did this just like He does everything. And suddenly I see a picture that is a little bigger. Bigger than me. Bigger than all of us. Master of the Universe, I want to say one thing to you, just one: Thank You. Despite the difficulty. Thank you for fifteen and a half years of light. Thank You for being with me at the most difficult moments. And that You will be with me during even more difficult moments. And also for all the other miracles which You have performed for me. Thank You. You gave, and You took. May Your name be blessed forever.

“Deracheha darchei noam – The Torah’s ways are pleasant.” Hashem wants us to be uplifted and inspired, not feel dejected and beaten down. He wants us to see others who are suffering and be filled with sympathy and support, not with condemnation and judgment. He wants us to bring our fellow Jews close to Torah with humility and intellectual modesty, not bombastic statements and outrageous proclamations.

Thirty years after the Challenger explosion, I continue to reject my teacher’s explanation and I refuse to believe in His God. While I know he meant well that day, our teacher failed us, his students. I implore you to insist on teachers for your children, and leaders for yourself, who understand and present that Hashem is in charge, we are incapable of having access to His secrets and His ways and that “divrei chachamim b’nachas nishmaim – the words of the wise are most effective when delivered with pleasantness.”

Rabbi Efrem Goldberg is the mora d’asra of the Boca Raton Synagogue.