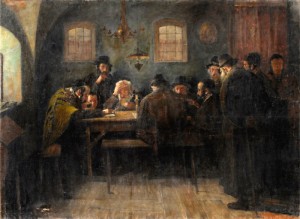 This Open Orthodox credo has emerged in various writings cited here over the past few years, and it has taken center stage again in some new Open Orthodox writings, two of which were included in this week’s Cross-Currents Weekly Digest.

One such piece, entitled The Gay Child in My Daughter’s First Grade Class, written by an Open Orthodox leader in Canada, argues that teachers in yeshiva day schools should not teach that boys marry girls and vice versa, as it offends the realities of homosexuality and same-sex marriage. The Torah’s moral position on the topic is completely absent from this essay, as if our main concern should be to show respect for homosexuality, while we block out the fact that the Torah just so happens to have some choice words and value points about homosexual unions.

Of course, those with same-sex attraction should be shown understanding and sensitivity, but the problem here is teaching new norms and formulating a novel morality that is not in sync with the Torah, while the Torah’s position is granted faint acknowledgment, to be technically followed in a strictly halachic sense while rejecting its thrust and message.

The writer of this essay, as did other, more senior Open Orthodox leaders, links readers to a video entitled An Orthodox LGBTQ+ Wish List, which she says inspired her. Viewers will note that the video includes aspirations and even demands by homosexuals that their unions be accepted by Orthodoxy. If this does not contradict the Torah, I do not know what does. Yet, Open Orthodoxy extolls it.

Another new Open Orthodox article, Women of the Tent: The Power of Women’s Prayer Spaces, argues with the interpretations of Rishonim (who were actually invoking the words of Chazal) in praising the modesty and halachic meticulousness of righteous women, rather than showcasing these women as center stage personalities:

Rashi comments on the fact that Sarah is nowhere to be found when guests arrive in Genesis 18:2, and explains that Sarah was in her tent because she is modest. Here we see a gendered look at the function of her tent, closed and private, as opposed to Abraham’s which couldn’t be more inviting. Respectively, I think that Rashi’s perspective does not jibe well with the text. When the guests enter Abraham’s tent, they are expecting Sarah. They are confused as to why she isn’t there. They ask for her by name. The lesson to be learned shouldn’t be that Sarah was modest… Another famous story of a woman with a tent is Yael. She famously welcomes Sisera into her tent and puts him into a fairly deep sleep with warm milk. Soon after, she thrusts one of the tent pegs into Sisera’s forehead, killing the leader of the opposition in the battle led by Deborah. While this could serve as an example of a woman who was resourceful and served as a brave and bold soldier, instead, commentaries praise Yael for using a tent peg instead of a sword. They explain that Yael was careful as to not violate the prohibition, “A man’s item shall not be on a woman…” (Deuteronomy 22:5). Here are two biblical examples of women leaders whose strong personalities are subdued by rabbis’ interpretation.

Again, the words and values of Chazal and primary rabbinic authorities are rejected.

Another Open Orthodox leader recently posted about his great discomfort reciting aloud the beracha of She’lo asani isha, which he feels is a terrible offense to women. Unlike some of his Open Orthodox colleagues who omit this beracha, this Open Orthodox scholar, committed to halachic requirements, recites it, but he clearly disagrees with the beracha as he understands it.

This bifurcation of Torah law and Torah values, or Torah morality, is one of the touchstones of Open Orthodoxy. Although it has not yet been fully explored and highlighted, it should be.

Here are some pertinent words from Rav Soloveitchik zt”l about the topic:

One cannot divide the Aseres Ha-Dibros (Ten Commandments) into parts, and separate the social norms from the so-called theological or ritual norms… Either man accepts the authority of God as the legislator of the moral norm, be it individual or social, or he gives up his attempts to mold a moral conscience and to organize a society upon the foundation of a man-made relativistic morality…

In a 1968 address to RIETS Rabbinic Alumni (published here), noting that the Torah records that the Avos (Patriarchs) erected mizbechos (altars) but usually omits mention of sacrifice thereon, the Rav explained:

And that’s what Avrohom taught himself, and he taught others. This means “vayiven sham mizbe’ach” (“he erected an altar there”) actually. Whom did he sacrifice? His own independence, his own pride, his own comfort, his own desires, his own logic, his own reasons. He believed. If one believes, it is an act of surrender, sacrifice…

Even those who admit the truthfulness of the Torah Shebe’al Peh (the Oral Law) but who are critical of Chachmei Chazal (the Talmudic Sages) as personalities, who find fault with Chachmei Chazal, fault in their character, their behavior, or their conduct, who say that Chachmei Chazal were prejudiced, which actually has no impact upon the Halacha; nevertheless, he is to be considered as a kofer (denier).

Authentic Judaism is not only an expression of commitment to the letter of the Law, but also to the spirit of the Law, and to the attitudes of the Law’s authorities. The latter two of these critical components have set Open Orthodoxy apart from normative Orthodoxy, as Open Orthodoxy has tried its best to replace many traditional Torah attitudes with contemporary secular values and mores.

(It of course must be noted as well that several Open Orthodox seminary students have forthrightly denied even the first component – fidelity to the letter of the Law – and their ordinations were nonetheless kept on track. One such ordainee wrote a book that rejects the halachic concept of Kiddushin (marriage). And a young man who is scheduled to be ordained soon has written that the prohibition of homosexual relations should be rescinded.)

Authentic Judaism at times boldly confronts and always teaches society. The Torah is not afraid to speak out, even when contemporary  values, including egalitarianism, do not comport therewith. Judaism  has always been about going against the grain and taking a stand for the  Torah’s values in the face of societal opposition. This is the story of  Avrohom Avinu, and it is the narrative of our people. It is and has always been the  key and mandate for the survival of our faith and our nation.

This unswerving fidelity to the traditional Word of God and Values of God are in fact expressed by Rav Aharon Lichtenstein zt”l in the attached letter about the legacy of Rav Soloveitchik. The letter expressed Rav Lichtenstein’s opposition on the matter to the positions of Edah, the organization that is roughly considered to be the forerunner to Open Orthodoxy. Please read the letter and share it.

As I have written on many prior occasions, I do not relish the writing of these articles. In fact, I pen these articles with great dislike and severe discomfort, as I am not a confrontational person. I typically do everything possible and then some to avoid conflict, and I would prefer to use my time on almost anything else. Yet, there is a need to speak out when the integrity of Torah is at stake, and there are many who are unaware of the issues and problems.

May there be no need for any more such articles, and may Orthodoxy, in its many beautiful and varied authentic manifestations, be preserved and perpetuated according to the values of our Mesorah.