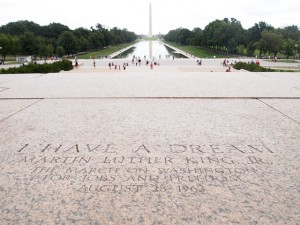 In an atmosphere of growing racial tension and facing up to pockets of racism within our own community, it is great to see some people doing something about both problems. No strangers to creating kiddush Hashem, the Maccabeats have teamed up with a black a cappella group, Naturally 7, to revive a James Taylor tribute to Martin Luther King.

We don’t have to remind our readers about Dr. King’s favorable attitudes towards Israel. What some of us may not have bothered to figure out is that the number of black Americans who support Israel exceeds the number of American Jews who do the same. According to a 2013 Pew report there are about 4.2 million Jews in America, or as many as 5.3M if you count those who consider themselves “Jews with no religion.” Alas, we know that some of this group is rather cool to Israel – without even counting the traitor and turncoat JVP types. On the other hand, there are 41.7M African-Americans. According to a different Pew report, some 15% of them belong to black evangelical churches, where support for Israel is extremely strong. That yields a potential 6.25M supporters of Israel. Now, it might be that not all of them are enthusiastic Israel boosters – although on the other hand they very well may. So cut the number down somewhat. Then look at the historically black non-evangelical churches. They amount to 59% of the black population. Many of these churches are conservative in values, and conservative in their politics. They include 6% Pentecostal (and you have to look pretty hard to find Pentecostals who are not Israel supporters – that yields some 2.5M right there!) and 40% Baptist (where you are sure to find at least many supporters.)

Strong black support for Israel doesn’t offset a different phenomenon – the much higher than average rate of black anti-Semitism. But it doesn’t make sense to focus only on the bad news, while ignoring the good.

Meanwhile, enjoy the music – and the great message.