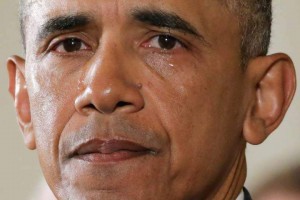 Readers of a certain age will likely recognize the name Edmund Muskie. He was a candidate for the Democratic Party nomination for President back in 1972.

There were several reasons why the candidacy of the former Maine governor, senator and Secretary of State was curtailed. Rumors were spread that he was a drug addict. The Manchester Union-Leader asserted that his wife was an alcoholic and bad-mannered, and that Muskie had made disparaging remarks about French-Canadians.

It emerged later that the latter rumor was a fabrication, part of Richard Nixon’s infamous “dirty tricks” strategy to harm political enemies. But damage had been done, and Muskie’s reaction to the negative characterizations of his wife was widely regarded as coup de grâce for his campaign.

Standing before reporters outside the newspaper’s offices on a snowy February day in 1972, he emotionally defended his wife. And, at one point, shed tears.

He later claimed that, while he was indeed upset, the droplets on his face were merely melted snowflakes.

No one will ever know. Mr. Muskie died in 1996 and videos of the incident are inconclusive. One thing, though, is clear: The idea of a president capable of crying seemed shameful to the American electorate in 1972.

Contrast that with the public reaction to the current Crier-in-Chief. Mr. Obama has not held back from weeping on several occasions, including memorial services and as he presented military awards. And, most recently, when he announced an executive order expanding the scope of background checks on gun buyers and increasing funding for mental health treatment (actions that, amazingly, raised howls of protest from some – but that’s a different article). In the presence of family members of gun fatalities, he choked up as he recalled the children murdered in the Sandy Hook elementary school shooting.

The usual suspects, of course, intent on seeing only cold, diabolical evil in Obama, immediately took to social media to share theories about how the president had managed to conjure his obviously (at least to the commenters) fake tears. The thought that he was sincerely distraught at the memory of small schoolchildren’s bodies riddled with bullets just could not be entertained, at any cost.

Saner Americans readily accepted that the president’s tears were sincere. Some found the tears laudable, evidence of his humanity. Others found them telling, evidencing the president’s frustration over fighting a gun lobby that insists that, unlike other fundamental rights like free speech and assembly, the Second Amendment must be unlimited. Others just found the crying unremarkable.

No one these days seems to see a president sincerely tearing up as scandalous. What to make of that? Is it evidence to the “wimping down” of America? An emotional counterpart to the moral decline of a once-great nation?

In some ways, American society has indeed grown more advanced. It is, for instance, no longer as riven with overt racism and anti-Semitism as once it was (even if individual anti-Semitic acts are far from rare even today). The idea that parents are the best arbiters of their children’s educational environments has become enshrined in law and widely accepted (if not yet widely taken to its logical legislative conclusion). The distance traveled since Mr. Muskie’s day regarding leaders’ public emoting may be another sign of America’s positive growth.

Leaving the hidden onion-juice conspiracy theorists aside (where they belong), sincere crying is not dishonorable. Emotions, and the tears that accompany their most intense states, are the hallmark of a developed human being. Your GPS guide doesn’t cry. Nazis don’t cry. Terrorists don’t cry.

By contrast, we Jews are known for our tears. It may have been wrong for our ancestors to cry out of fear when they first stood at the cusp of entering Eretz Yisrael. But that bechiyah shel chinam, “unwarranted crying,” is atoned for by our own tears, on Tisha B’Av, on Yom Kippur, at Tikkun Chatzos… The Kosel Maaravi is saltily stained with the sobbing of countless Jewish generations.

Our forefather Yaakov cried. So did Yosef, and Moshe Rabbeinu. Rachel Imeinu cries still. The Cohen Gadol cried, as did tanna’im. Even Hashem, kivayachol, is described as crying (Chagigah, 5b).

So, whether or not larger society’s having come to accept that even a leader is not lesser for lachrymosity is something positive, Jewish weeping for the right reasons most certainly is.

May it lead, and soon, to the end of all crying, to the fulfillment of Yeshayahu’s nevuah (25:8) that Hashem “will wipe tears from every face.”