Who Needs Orthodox Women Leaders? We Do. 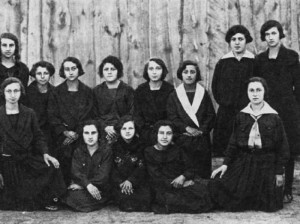 “You’ve come a long way, baby” was the slogan coined by the Leo Burnett Agency in 1968 for a thinner, more feminine smoke produced by the Phillip Morris Company as the “Virginia Slims” brand cigarette. The campaign was unusually successful in marketing cigarettes, by tickling a soft spot in the American psyche that was celebrating the advent of feminism.

The Jewish World often follow the leads of its host societies, albeit at a much slower pace. It is not by accident that 300 years later and 380 kilometers away from Martin Luther’s Reformation came forth Israel Jacobson’s Reformed Judaism. It is also not surprising that, 100 years after the French Revolution paved the way for Nationalism to sweep through Europe, Theodor Herzl published Der Judenstaat exclaiming that Jews should return to their National Homeland, Israel. In our time, taking the lead from the Episcopal Church, Jeho-ah’s Witnesses and the liberal streams of Judaism, a fringe element of the Orthodox community has announced the “long time coming” arrival of Female Orthodox Clergy. This is the latest example of absorbing the ways of our surroundings.

The Jewish World has always had female leaders — from Sarah, Rebecca Rachel, Leah and Devorah the Prophetess until today. Three outstanding representatives of true Orthodox Jewish Leadership in modern times are Sarah Shnerer z”l, Nechama Liebowitz z”l and Y”LT Rebbitin Esther Jungreis. Long before Modern Day Clerical Feminist aspirations took root, Sarah Schnerer established a girls school in 1917 for 25 children, that by the eve of WWII had blossomed into 250 schools with over 40,000 students. Today her legacy continues, with over 125 Beis Yaakov schools and seminaries that are producing the wholesome and dedicated future mothers of Israel of tomorrow.

In 1930 Professor Liebowitz attained her doctorate, in 1956 she was awarded the Israel Prize for furthering our understanding of Tanach, and in 1983 she received the Bialik Prize for Jewish Thought. She was a trailblazing yet soft-spoken scholar par excellence who taught both men and women her breadth, knowledge and insights into Torah. Finally, Rebbitizin Jungreis is a current modern-day orthodox Female leader (may she have a Refuah Shelaymah). She mothered the outreach organization Hineni in 1973 that has brought thousands closer to Torah Judaism. For decades she has been dynamically speaking and writing about Torah and Judaism, positively educating and influencing Jews and non-Jews worldwide. The common denominator between all three accomplished women is that they studied, taught, lectured and led our nation as proud orthodox Jewish females without great controversy or riding the isms of the day.

Orthodox Jews crave true Jewish Leadership, male and female. Everyone knows that alongside any successful rabbi is a smart, pleasant and powerful Rebbitzin. In America today there are hundreds of outstanding orthodox Rebbitzins that already lead, counsel, teach and inspire. There are also hundreds if not thousands of outstanding orthodox female educators who are not Rebbitizins. The current cry for parity and equality in religious title is just the latest echo from our host culture seeping into the less fortified souls of our people. I wonder what will be next?

Not too many women are smoking Virginia Slims cigarettes these days. Herzl’s Der Judenstaat is rarely if ever quoted on the Knesset floor. History has always and will certainly filter out untruths. Our Torah and its teachings are eternal and transcend any and all isms throughout the ages.
Who needs orthodox women leaders? We do; women like Sarah Shnerer z”l, Nechama Liebowitz z”l and Rebbitin Esther Jungreis who have proudly and prominently taught inspiring Torah and Orthodox Judaism creatively, while carefully maintaining the Mesorah bequeathed unto them by their fathers and mothers. They have done everything in their power to inspire us to carry the true torch of Torah forward; let us learn from our true leaders.

This article also appeared in the Jewish Link of NJ.