An Equal and Opposite Reaction 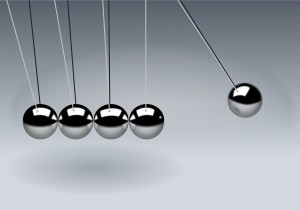 The articles about the dearth of female pictures in publications targeting Orthodox readership by Rabbis Adlerstein, Gordimer and Menken, led to many strong, passionate posts and comments, some logical, some strident, some emotional, some mean-spirited and some downright silly.

Some used slurs intended to brand the other side of the discussion as a malefactor, and to deny the validity of the position without having to present a cogent opposing argument. (Interesting note: “malefactor” begins with “male”. Is that possibly Misandric?)

“Misogynist” is one of those terms. “Demeaning” is another catchword. They popped up a couple of times in the comments, as did misapplications of the word “tznius”. Quoting out of context appeared in several comments to bolster a point as well.

Let’s posit that the current “picture” is a bit over the top. For that matter, the lack of tznius, both in policy and in deed, in the public forum, is over the top. In English the term for that is “taken to its logical conclusion”. Many good ideas end up with absurd by-products and unintended consequences. The idea of “equal rights” has brought us gay marriage and lawsuits over “discrimination”. Well-intentioned ideas; bad logical conclusions.

How did this “picture” situation come to be? I call it the “Jewish Press” syndrome, but you can call it what you please. There are several factors at play, and, while this will not be an exhaustive review of the matter, it should cover the main points.

The first factor to consider is that this situation is purely “Newtonian.” Society has turned extremely vulgar; it is becoming increasingly difficult to find a safe place for either gender that is not bombarded with sexuality, indecency, and glorification of deviancy, all in the name of diversity and tolerance. Refer to Newton’s third law: “For every action, there is an equal and opposite reaction.” To whatever degree that prustkeit and lewdness is being shoved upon us, there is going to be a natural push in the opposite direction. It is not the liberal faction that is going to push back; they embrace the “freedom of expression” and believe it to be proper. So anyone confronting this must be prepared to be labeled “ultra,” “chareidi” and intolerant.

There is little that can be done to combat the wave of indecency in the public sphere; creating safe enclaves is the only protection. The “extreme” attitude that the rigorously Orthodox are accused of is simply the “equal and opposite reaction.” If the Modern Orthodox world were less embracing of lowered standards, there would be a lesser need, in a Newtonian way, for what is perceived to be over the top seclusion or exclusion of women among chareidim.

The second factor is that men and women are different beings. That is the correct terminology — it is neither about being “equal” nor “substandard;” they are simply different. They have different interests, different desires, different hormones, different needs. It is immaterial to list examples; only die-hard, fanatical extremists deny this.

Rav Gordimer discussed the innate attraction of men to the looks of women, but there is another aspect, one that speaks to the understanding that this is not a “man’s” issue, but rather one that affects both genders equally. It is this: a non-Orthodox or non-Jewish married woman is likely to be offended if she spies her husband looking at another woman; not because she’s worried about his yir’as shomayim, but because she considers it an affront to the devotion and appreciation he should have for her. I haven’t really met men that react the same way.

There is a flip side to this as well. To men, the appearance of an unattractive, undesirable woman also has an effect — a negative one. It can be nearly as off-putting as the opposite is alluring. Women notice these things as well, and are critical of other women’s looks. It’s rather uncommon for men to be critical of other men’s appearances, unless it was due to being unkempt or ragged. This difference, while it is really not the reason for the lack of pictures, would suffice, if all other arguments failed.

The third factor is the true reason that no magazines carry women’s pictures has nothing to do with how this phenomenon has “morphed.” The press is driven by profit motives, not altruism. The best driver for magazines and newspapers is advertisement, and the best consumers are women. Perhaps people have forgotten that the Jewish Press and other organs were filled with advertisements for wigs and clothing stores that were completely inappropriate for journals catering to Orthodox clientele. The argument that magazines used was that there was no defined “red” line. Why was it appropriate to showcase the “honoree” couple in an institution’s advertisement but not okay for the magazine to showcase what they considered, from a business perspective, to be “appropriate” as well? In addition, some honorees were modestly dressed; others not. How does one publish one and not the other without losing clients?

In order to control the magazines, despite their profit motives, perhaps it became necessary to throw out the baby with the bathwater. Profit motives preclude self-policing. The fact that it has morphed into a new societal stricture that may at times border on the absurd is unfortunate, but much better than the bad old days. The clock isn’t going to roll back.

PC restrictions in liberal institutions also began with lofty motives, and those, too, have morphed into intolerable censorship that is entirely inconsonant with the ideal. Such is life.

As an aside, references to “Kavod HaBriyos” in this context are trite and meaningless. To those employing this argument, anything that fits with their leitmotif is Kavod HaBriyos; if not, it isn’t. This is almost as cliched and irrelevant as “Va’Ahavtem es haGeir,” the preferred catch-all to permit whatever the lax want to permit.

The Mishnah Berurah explains why two of our Birchos haShachar, Ozer Yisroel biGevurah and Oteir Yisroel beSif’arah, include the name Yisroel, while the others do not. He explains that both Brochos refer to Tznius, modesty, which is the hallmark of the Jew. The first refers to separating the leiv from the ervah, a concept that is, unfortunately, vastly underrated by many. The second refers to our head covering, reminding men that a Heavenly Eye is watching. Those that apply these two concepts in their lives deserve the title Yisroel. Those that don’t, well, a tulip by any other name is still a tulip. One may still be a Jew, but the honorific “Yisroel” must be earned.

Rabbi Shaul Gold studied at the Telz and Mirrer Yeshivos; he served as the Mara d’Asra of the Young Israel of Ave. U, and has been an educator for many years. The views in this essay are those of the author, and do not represent any shul or organization.