Parshas Va’eira – A Partnership of Opposites 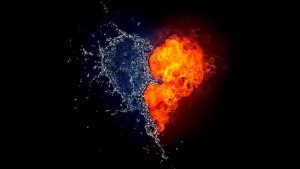 Only one of the Ten Plagues visited upon Par’oh and Mitzrayim elicits a declaration of guilt and admission of Hashem’s righteousness from the Egyptian leader.“

This time I have sinned,” Par’oh admits. “Hashem is the righteous One, and I and my nation are the wicked ones.” (Shemos 9:27).

It is the plague of hail. Why, of all the other punishments, that one?

What occurs is that the answer may lie in the Midrash brought by Rashi (ibid, 24), that each piece of hail contained a flame, and that water and fire “made peace with each other” in order “to do the will of their Creator.”

Par’oh was an idolater.  The Egyptians worshipped the Nile and, according to historians, the sun.  Idolatry entails choosing a “team” to be on.  One can be on Team Nile, Team Sun, Team Water, Team Fire…

Monotheism entails the recognition that all the “teams” (elohos) are subservient to the one Creator of all the elements (Elohim).

Perhaps Par’oh was forced to confront and internalize that fact by having witnessed, during the plague of hail, the “partnership” of opposites.

Truth be told, we are all comprised of opposites: souls and bodies.  Each has its own desideratum. The only way to “make peace” between them is doing the will of our Creator, which requires both elements to work together.