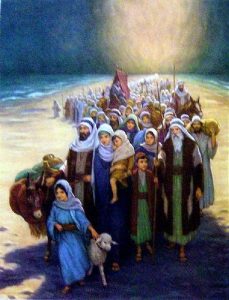 Shalach, the root of the word of the parshah’s title, is used elsewhere regarding the exodus from Mitzrayim (e.g. shalach es ami). So are the words yetziah (e.g. Shemos, 20:2) and geirush (e.g. ibid 11:1)

The metaphor telegraphed by that fact is clear. Klal Yisrael was virtually “married” to Mitzrayim, sunken to near its deepest level of tum’ah, and, with Hashem’s help, freed from that “marriage,” divorced, as it were, from Mitzrayim.

The symbolism doesn’t stop there. When the divorce is finalized, Klal Yisrael gets re-married, this time, permanently, to Hashem, with Har Sinai over the people’s heads serving as a chupah. (Indeed, several marriage customs are associated by various sources with Mattan Torah – the chupah, the candles, reminiscent of the lightning), even the breaking of a glass, recalling the sheviras haluchos).

And that would dovetail strikingly with the prohibition against returning to live in Egypt (Devarim 17:16). Because a remarried woman, too, is prohibited from returning to her first husband (Devarim 24:4).

Even more interesting is the implication of the metaphor to the baffling Gemara in Sotah (2a) that asserts that a man’s “initial mate” is divinely decreed before his birth; and his second one, in accord with his behavior.

Because, in our metaphor, Klal Yisrael’s first “mate,” Egypt, was in fact decreed, to Avraham at the bris bein habisarim; and its final one, Hashem, was earned by the people’s behavior: their willingness to follow Moshe into the desert and declaration of naaseh vinishma at Sinai.

And a coup de grâce lies in how the Gemara paraphrased above describes the challenge of finding the proper mates: kasheh k’krias Yam Suf – “as difficult as the splitting of the Sea.”

To read my most recent Ami column, “Behold the Eyes of Webb,” please click here.