Criminality in the Streets and in the Cloud 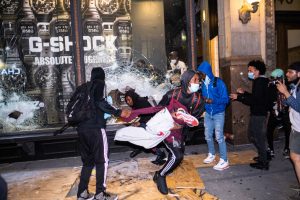 As sad as it is ironic, those who have seized the opportunity during protests over the killing of George Floyd to vandalize police vehicles and attack officers, deface buildings and loot stores are perpetuating racism.

Because, by their actions, they effectively reinforce the prejudices of people who view people of color as unbridled and lawless. Instead of images of black or brown scientists, doctors, lawyers, teachers or social workers, what the face of a nonwhite person conjures in their minds is a threat.

That’s what was perceived by the white woman who was firmly perched at the precipice of the news cycle until the killing of Mr. Floyd pushed her off. A black man who was bird-watching in New York’s Central Park politely asked her to restrain her unleashed dog and she responded by calling police, claiming that an “African-American” was threatening her. His words “Look, if you’re going to do what you want, I’m going to do what I want, but you’re not going to like it” probably wouldn’t have struck her as threatening had the bird watcher been Caucasian.

But he wasn’t and so they did.

And the looters of late have only empowered such prejudice. Of, course, thugs don’t give a first, much less second, thought to the impact of their actions on others. Their only concern is about what good stuff they might grab from violated stores. How unfortunate, though, that the national conversations about racial injustice and police misconduct have again been marred by mindless marauders.

As it happens, it wasn’t only on American streets that roguery reigned. As always these days, when chaos and stupidity blossom, the noxious pollen of Jew-hatred is released across the internet, particularly on social media.

And so it is that we have, on Twitter, a man (whose identifying graphic is a Hebrew declaration of fealty to Christianity) proclaiming that “Jewish whites were the most prolific slave owners in history. They practically created slavery in America,” and concluding that shuls are “free game” for vandalism.

Aside from his hogwash “history,” his conclusion is, to put it delicately, illogical. It takes a twisted mind to invoke something that didn’t happen in order to vilify distant descendants of those who didn’t do it.

There was further lunatic logic, too, from another Twitter twit, who explained that “Jewish Americans hold all the power in the country, thus you cannot be racist or anti-Semitic towards them.”

So, you see, since many Jews have been successful in their professions, in the public sphere and in public service, hatred and harm can be directed against them.

Interestingly, falsehoods propagated by social media became a recent major news item, too, right alongside the killing of George Floyd and its aftermath.

Twitter took the unprecedented step of placing a fact-check notice on a tweet by President Trump in which he asserted that mail-in ballots lead to voter fraud. The notice directed followers of the president’s tweets to a site offering facts showing otherwise.

And then, a day later, the social media company put a warning label on what it regarded as the president’s threat against protestors in Minneapolis, his tweet that “when the looting starts, the shooting starts” — a sentence that has been used by racists in the past and that, Twitter said, “violates our policies regarding the glorification of violence [because of the sentence’s]… historical context… its connection to violence, and the risk it could inspire similar actions today.”

In response, Mr. Trump accused Twitter of bias against him, and issued an executive order aimed at removing Section 230 of the Communications Decency Act, a move could change the status of social media giants from “platforms,” which absolves them of responsibility for things posted on them, to the equivalent of newspapers, leaving them open to lawsuits over anyone’s postings.

Although it’s safe to say that it wasn’t Mr. Trump’s intent, removing Section 230 would likely force the social media giants to disallow him to post on them — entailing a loss of eyeballs they will be anguished to suffer — and open the door for decentralized, under-the-radar alternatives to take their place. Some of those alternatives will be more than happy to host the president.

And they will be happy, too, to host people seeking to destabilize society. The Wall Street Journal recently reported that Facebook hid a study it undertook that found that its algorithms exacerbate polarization — that 64% of all extremist group ‘joins’ produced by the platform “are due to our recommendation tools.”

And so, if Twitter’s attempts to correct misinformation is effectively undermined, we can expect a slew of new “post what you will” platforms that will become newly popular and eagerly employed by the always-ready-to-pounce anti-Semites on the extremes of the political spectrum.

Such actors will be itching to spread canards about Jews and to encourage violence against them. As itching as amoral rioters are to steal sneakers and luxury goods.