“Orthodox” Gay Marriage and the Path to Destruction 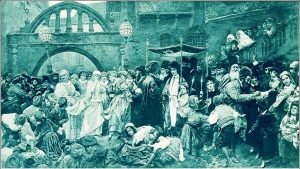 Thankfully, I have not written about Open Orthodoxy for a very, very long time. It is not something I enjoy doing or have the time to focus on, and I only address this topic when it is really necessary.

I had the privilege of officiating a wedding on Sunday. In many ways, it was like any other simcha I’ve officiated: joyous, Jewish, spiritual, full of love. What made it different was that they were two men who joined in sacred, covenantal relationship. This coming week Jewish communities will hear two words uttered in synagogues across the globe: naaseh v’nishma, we will do and we will listen. We will act and we will understand. As I shared to the chatanim, the grooms, it is their passion, charge and desire for action which made this holy day possible. While some may not yet or ever fully comprehend, it is their actions, deeds and maasim tovim, their mitzvot, which will speak for themselves with inherent worth and value. Mazl tov!

Yes, this popular Open Orthodox rabbi performed a gay “wedding”, lauding it as a sacred event, comparing it to Matan Torah, the Giving of the Holy Torah at Sinai. That which the Torah forbids and condemns with unusually harsh diction is celebrated and sanctified by this rabbi.

Mlotek’s post about performing the gay wedding was praised by other popular Open Orthodox leaders, including a former YCT president and Shmuly Yanklowitz, a YCT poster boy (quite literally) and founder and head of Torat Chayim, an Open Orthodox progressive/liberal clergy group.

Mlotek has previously expressed nontraditional views on intermarriage and gay marriage. His recent officiation at a gay wedding was thus no surprise. What is significant, though, is Yanklowitz’ subsequent castigation of “homophobes” who oppose gay marriage, in which he notes a few other Torat Chayim members who perform gay weddings (please also see here), and, in the comments section, his postulation:

It would be virtually impossible, in my view, to look at the Torah guiding same sex marriages as not being Torah….yes, one might not hold by that Torah but its Torah. But I know there are those who believe Torah in a fundamentalistic fashion (i.e. only one truth) as compared to a pluralistic fashion (validating different Torah-rooting approaches even if we only live/hold by one). My pluralistic Torah also makes room for those fundamentalists (as long as they don’t burn others).

But I suspect you find the Rav’s “teleological suspension of the ethical” compelling? and that moments like this are like the Akeidah? Whereas I do not. I do not think the halakha can prevent us from the ethical but rather must contain it.

This is a reference to the axiom articulated by Rav Soloveitchik zt”l of Surrender (to the Divine Will), as exemplified by the Akeidah/Binding of Isaac – one must subjugate his natural emotions and values in deference to the Torah. Yanklowitz rejects this concept.

Obviously, for one to call himself an Orthodox rabbi while celebrating gay marriage and declaring it holy is as Orthodox as granting kosher certification to Boar’s Head ham or including Wonder Bread in a Passover food directory. The problem is that while these examples are obviously nonsensical and joke-worthy, Torat Chayim clergy members have twisted Judaism like a pretzel and genuinely believe that their views on homosexuality represent the Torah.

The prospective and broad-ranging danger of this folly cannot be dismissed. We are today faced with Orthodox-style advocates for gay pride, Orthodox-style proponents of publicly accepting and welcoming openly-gay couples at shul, and even a self-described gay Orthodox rabbi, who lives with his male partner. These people, all of whom are Torat Chayim members, present themselves as learned rabbinic authorities, and they work hard to persuade less-knowledgeable members of the public that their views are consistent with Orthodox Judaism, as they lobby and push for change, while at times accusing those who hold fast to Torah values of being haters and maligning them as being afflicted with homophobia – an imaginary disorder fabricated so as to disparage and shame those who do not accept homosexuality.

(We cannot fail to note an Israeli Open Orthodox rabbi (Benny Lau) who showed up at a gay wedding with his well wishes, Rabbi Avi Weiss who, while rejecting Orthodox gay “marriage”, takes a very soft stance on homosexuality, and Open Orthodox Rabbi Dr. Daniel Sperber, who sanctions the idea of “Orthodox” gay marriage, so long as another word, such as “partnership”, is used for it.)

A natural outgrowth of the “gay Orthodox” agenda is the imposition of demands on Orthodox institutions and organizations, insisting that they cave in and compromise their values, or be faced with strict ultimatums and severe penalties. Yeshiva University is a case in point, as homosexual groups which self-identify as Orthodox are now resorting to financial and legal threats, in an effort to intimidate YU to comply with demands that violate its religious convictions.

Here is what happened this past fall:

Alumni and LGBT organizations are continuing to put pressure on the school this week with a campaign timed for the same day as Y.U.’s annual fundraiser. With the hashtag #PledgeNotToPledge, they are asking alumni not to donate to Y.U.’s campaign until the march organizers’ demands are met. Jewish Queer Youth, an organization supporting Jewish LGBT teens in the Orthodox community, is asking Y.U. alumni to support JQY’s campus resources instead of making a gift to Y.U.

And yesterday, news broke that homosexual students are taking legal action against YU, filing a complaint with the New York City Human Rights Commission, with the demand that YU allow an official gay club on its undergraduate campus(es).

This all follows an “Orthodox” LGBTQ march against YU as the current school year commenced.

Things have gotten out of hand and have escalated to a major new level. Rather than dealing with a few Open Orthodox rabbis who inanely distort the Torah into the opposite of what it is, a robust “Orthodox” gay rights movement has formed, which is likely to spread its wings and its threats much further throughout the entire Orthodox infrastructure, going after Orthodox schools, shuls, organizations and agencies, where it is suspected that openly gay self-expression might not be officially welcome.

Although those suffering from same-sex attraction should not be judged or vilified, and those who overcome their urges and adhere to the Torah are true tzaddikim, we are dealing here with people who defy and advertise their being at odds with the Torah’s values.

It must also be stated that the human victims of the Torat Chayim phenomenon will be those who utilize the services of Torat Chaim rabbis for conversion or divorce/gittin. While these situations will be evaluated on a case-by-case basis, there is little question that on the “street,” conversions and divorces processed through Torat Chaim will have no more standing in the Orthodox community than those coming out of JTS. Friends who care about friends will advise them to stay away from Torat Chaim.

It is sad and shocking that this is the reality. Had those with the power to do so nipped this all in the bud many years ago at its inception, taking a principled and courageous stand by publicly declaring that the Open Orthodox movement, its views and actions, are not Orthodox, I doubt that we would now be faced with these problems.