Faith Amid the Flames 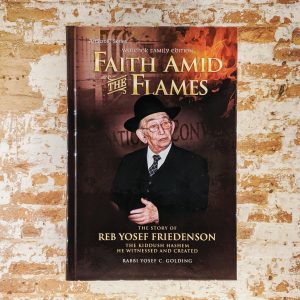 There was no reason for the young man to not respond to the Nazi’s question. The soldier and his partner had violently burst into his family’s apartment in the Polish city of Lodz, which had been overrun by the Germans at the start of World War II. The 17-year-old, fearful for his life, had every reason to cooperate and answer respectfully.

Pointing to the stately books on the bookshelf, they demanded to know what they were.

“The Talmud,” he answered.

“At the mention of that word, they became like mad dogs,” Yosef Friedenson recalled many decades later. “They threw the holy books on the floor and trampled them, ripping them to shreds with their heavy boots.”

After the uninvited visitors had left, Yosef asked his father why they had responded so viciously.

“They don’t hate us as a people,” was the response. “They hate us because of our holy books. What is written in them is a contradiction to all they stand for, to their outlook and corrupt mentality.” The words stayed with Reb Yosef throughout his life.

The young man, who quickly regretted his guileless response to the Nazi, spent the years of World War II fleeing for his life and managing – barely – to survive the Warsaw ghetto and an assortment of Nazi concentration camps.

And he spent his post-war years serving as a human bridge between the Jewish world that the Germans and their partners destroyed and the new one that came into being after 1945. He was a keen historian, meticulous journalist, eloquent speaker and one of the nicest people I have ever met.

Yosef Friedenson – “Mr. Friedenson” was his moniker of choice, although he was more learned and wise than many rabbis – was a remarkable man, with a remarkable memory and a remarkable talent for using words to conjure the details of the glorious Jewish past that, as he began to write, lay smoldering in the ruins of Europe.

He continued that mission for decades thereafter, as editor of Dos Yiddishe Vort, a Yiddish-language periodical published under the auspices of Agudath Israel of America – 430 issues were printed over many years – and as a riveting, if low-key, speaker at gatherings large and small.

I had the privilege of working in the same office as he, Agudath Israel of America’s national headquarters in New York, for almost 20 years before he was summoned to heaven in 2013. His work ethic – he would labor mightily on each issue of DYV, essentially assembling it on his own and writing much of its content – and calm, endearing demeanor were an unusual combination. I never saw him upset. I suspect that his memories of truly trying years made every subsequent problem, disappointment or challenge the smallest of small stuff.

When Mr. Friedenson recounted his experiences over the course of his remarkable life, he was not a mere memoirist, and not a detached bemoaner of the persistence of Jew-hatred. He was a survivor who was imbued with the recognition that God was present, and remains present, in the darkest hours, and that, while Divine ways might confound us, Divine providence is always at work.

Mr. Friedenson saw it as his mission to convey the glory of pre-war Jewish Europe and the trials that Jews endured during the war years to the next generation, and the one after that.

To that end, he produced a wealth of personal testimonies, recollections and observations, sometimes conveyed orally in English to audiences, but most of them written as essays in Yiddish over many years. To read any of them is to be transported to another world, and to be inspired.

One story he would often tell, and wrote about, occurred when he and his partner, Aviezri, were on a garbage detail in Auschwitz, near the women’s barracks. An emaciated, teen-aged girl yelled at them through the fence, asking if they could procure a “sweater” for her.

At great personal risk, his partner was able to get his hands on a sweater, placed it under his prisoner uniform, and approached the fence of the women’s camp.

He returned with tears streaming down his cheeks: “She didn’t want a ‘sweater’; she wanted a ‘Siddur’.” It was close to Rosh Hashanah and she wanted something to enable her to pray.

He told that story because it encapsulated his worldview of never giving in when facing adversity.

A collection of Mr. Friedenson’s recollections, expertly translated and edited by his son-in-law, Rabbi Yosef Golding to present an autobiographical chronology of his life, was recently published as Faith Amid the Flames (Artscroll/Mesorah).

It is a riveting account of his youth, the harrowing war years, and life after his liberation by the American army, until he arrived on American shores in 1951. It includes not only his own compelling and inspiring personal story but also an abundance of historical information and description of a number of illustrious Jewish personalities who lived in the European Jewish world that was.

Most important, it is – as he was over his life – saturated with the faith, determination and trust in Heaven that comprise the hallmark of an ideal Jew.